Gemstones are pieces of mineral crystal that can be cut and polished to make jewellery. They come in all shapes and sizes, and there are hundreds of types out there on the market. Diamonds, emeralds, amethysts, and rubies are all examples of gemstones. Some organic materials that are used for jewellery are often described as being gemstones even though they aren’t technically: amber, pearl, and jet are all examples of this.

Throughout time, different gemstones and precious minerals have acquired specific meanings. Today, we recognise twelve gemstones in particular as being ‘birthstones’ – stones that are associated with zodiac signs and bring good fortune to the wearer. All of these twelve stones have become popular in jewellery design, and some have gained popularity as fashions have changed. 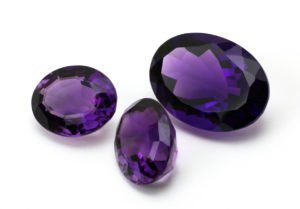 Amethyst is a variety of quartz and is a purple stone that rates relatively highly on the Mohs scale of hardness with a score of 8. As February’s birthstone, it is thought to repel ill wishes from others and turn energy into love. 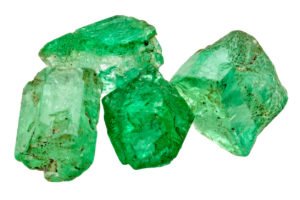 Beryl is a mineral composed of many different elements that can result in different varieties: the most well-known are emerald and aquamarine. Beryl is common and can be found in massive crops across the world. It is a strong gemstone, with a rating of 7.5-8 on the Mohs hardness scale. 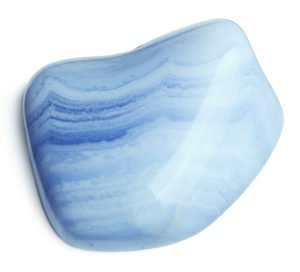 Chalcedony is a crystalline form of silica, composed of intergrowths of quartz and moganite. It can be opaque or transparent and has a 6.5-7 rating on the Mohs scale. The stone is thought to be able to dissolve negative vibrations and put the heart and mind into balance. 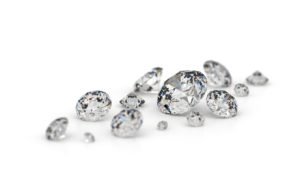 Diamonds are one of the world’s most valuable gemstones, prized for their beauty and clarity. The diamond is April’s birthstone and they have been commonly used in engagement rings for at least the last century. Sitting at 10 on the Mohs hardness scale, diamonds are one of the hardest materials on the planet. 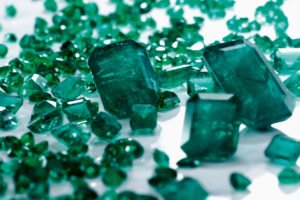 Emeralds are May’s birthstone. A truly stunning beautiful stone of deep green, it can be found all over the world. With a rating of around 7.5-8 on the Mohs hardness scale making it suitable for everyday wear. Because of this, emeralds were particularly popular in mid-century cocktail jewellery like rings or necklaces. 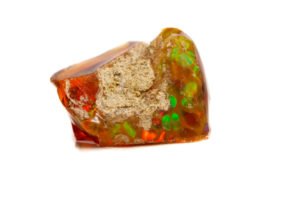 Fire opals are translucent opals with warm body colours: yellow, orange and gold. Commonly found in Mexico, they are often referred to as Mexican fire opals. These magical stones are highly prized, but often don’t sell for high prices as in some circles, they are regarded as being unlucky. However, despite this, they were particularly popular in Victorian jewellery and then again in mid-century jewellery. 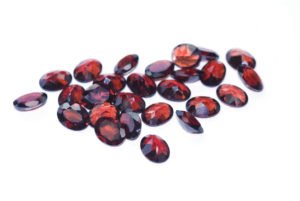 Garnet is January’s birthstone, and with a rating of 6.5-7 on the Mohs hardness scale it is often used in earrings, necklaces and brooches but is not suitable for everyday use. Garnet is known for its gorgeous red colour, but it is also possible to find red, pink and yellow garnets, with very rare green Tsavorite garnets being the most sought after. 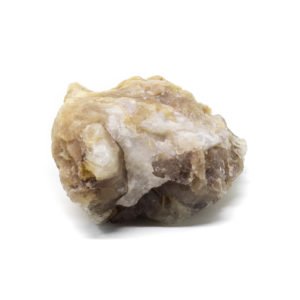 Hackmanite is an extremely rare variety of sodalite that changes colour when exposed to sunlight – this phenomenon is called tenebrescence. When in the dark, the mineral will be purple, but after exposure to sunlight, it can fade to a grayish white colour. Hackmanite is commonly found in Quebec. It can be cut and polished into jewellery. 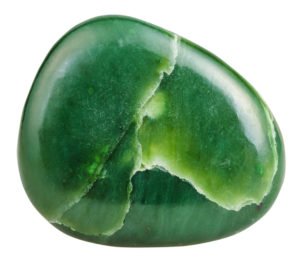 Found in Myanmar (Burma), Imperial Jade is incredibly rare and highly prized, and because of this it is known to be the most expensive gem in the world – worth more per gram than even the finest diamond. Jade with even bright colour and a high degree of translucency is given the designation ‘imperial jade’. It has been used in jewellery and ornaments for thousands of years across the East, in China and Japan in particular. 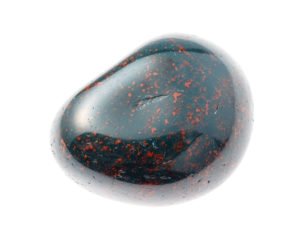 Jasper is an opaque and impure variety of silica that’s found in colours of red, yellow, brown or green. With a rating of 6.5-7 on the Mohs scale, it was popular in mid-century jewellery due to its variance in colour. Made from both chalcedony and microgranular quartz, it’s a truly stunning example of a lesser known gemstone. 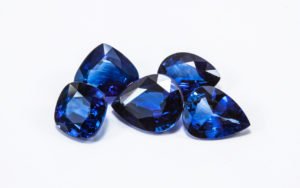 Kashmir sapphires (also known as Neelam) are the finest variety of blue sapphires, popular because of their deep blue colour. These stones were first sourced from sapphire mines in Kashmir during the 18th century and became sought after all over the world. They are incredibly rare, and the highest grossing sale of a Kashmir sapphire reached $180,731 per carat. 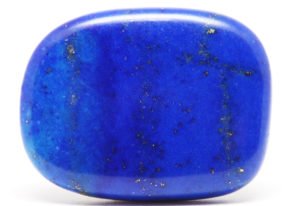 Lapis lazuli is a semi-precious gemstone prized for its intense blue colour with gold flecks. Lapis was used in Tutankhamun’s death mask, and it’s now known that the stone was widely used in Ancient Egypt. First mined in Afghanistan 6000 years ago, the stone does dry out and break down after thousands of years, so pieces that are this old are only found in museums. 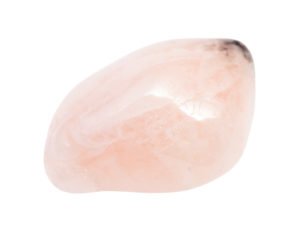 Morganite is a pink variety of beryl, that’s coloured by manganese or cesium. It naturally forms in masses and crystals and reaches 7.5-8 on the Mohs hardness scale, making it suitable for everyday wear. Morganite comes in a variety of warm colours but is must popular in pastel pink or purple – a beautiful delicate colour ideal for many types of jewellery. 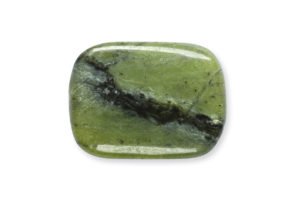 Nephrite is a variety of calcium, magnesium and iron-rich amphibole minerals, commonly found in green. As such, it is one of two different mineral species that is associated with jade. With the Mohs scale hardness reaching 6.5-7, it’s not suitable for everyday wear but is still hard enough to enjoy in beautiful jewellery. 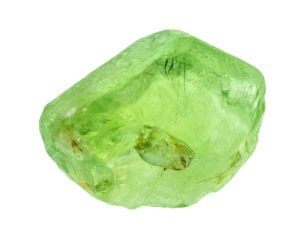 Olivine is a name of a group of rock-forming minerals that are found in igneous rocks. Olivine is yellow to yellow-green in colour, and is relatively common – seen in rock formations like basalt, gabbro, and peridotite all over the world. 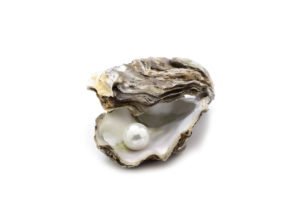 Pearl is June’s birthstone – although technically, it’s not actually a gemstone! Pearls are found inside oysters and can be natural, found in either freshwater or saltwater, or cultured – made in farms. Pearls are said to bring love, luck and peace, and they’re often associated with female wealth and power. 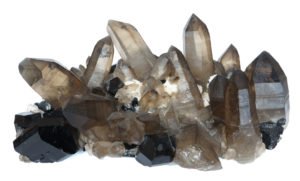 Quartz is a common chemical compound that’s made of silicon and oxygen – it can also be referred to as silicon dioxide. It is a hard, crystalline mineral that has a hexagonal crystal system. Quartz appears in almost every colour, including colourless, so it’s great for jewellery of any kind. 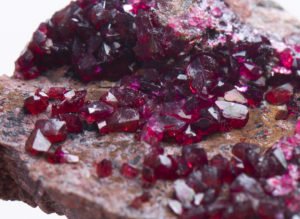 Roselite is a pink gemstone that is a rare variety of garnet, found only in Mexico. With a hardness of 6.5-7 on the Mohs scale, it’s not hard enough for everyday wear, but it still makes stunning cocktail or occasional jewellery. 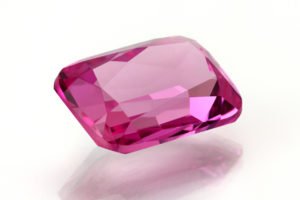 Spinel is most commonly found in pink but is also popular in purple, blue and red, although pure spinel is colourless. It reaches 7.5-9 on the Mohs scale depending on the variety. Found in Sri Lanka, Afghanistan and Myanmar, it’s incredibly popular in jewellery as it has beautiful properties and excellent clarity.

Tanzanite is a blue-violet variety of mineral zoisite that is caused by small amounts of vanadium. Tanzanite is named after the country where it is found – Tanzania. It is named as one of December’s birthstones, so is relatively popular to be worn by people all over the world. In its rough state it is brown, but the stone is treated to bring out the blue violet colour. 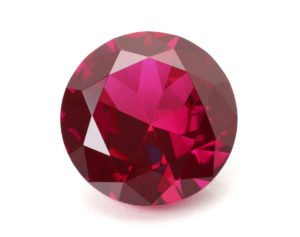 Umbalite is a member of the garnet family, named after the place that it is mined in Tanzania. Ranging in colour from pink to red-violet, it’s rare and expensive, meaning that it makes stunning jewellery. 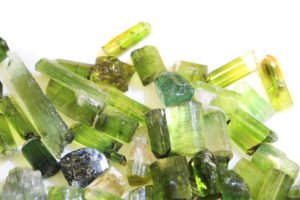 Verdelite is green tourmaline mineral. Tourmaline has a broad spectrum of colours from pink and red to blue and green. Thought to bring self-confidence and diminish fear, some people wear it as a raw crystal around the neck to bring about these properties. 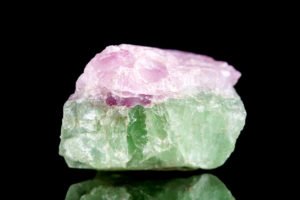 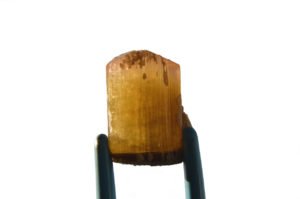 Xanthite is a yellow brown stone, a member of the tourmaline family, that’s found in the USA. Manganese rich, it has a hardness of 7 on the Mohs hardness scale making it possible to wear in jewellery. 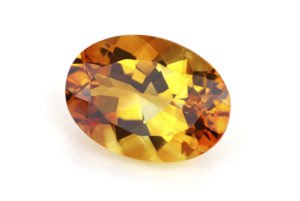 Yellow citrine is a stunning stone that is often used in jewellery thanks to it being named as a summer birthstone. Thought to bring enlightenment, optimism and clarity, it’s particularly popular in rings and worn as pendants. 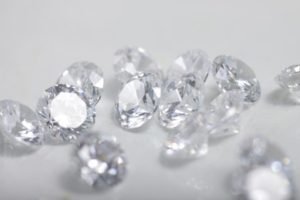 Zircon is a gemstone that has many colours and has been used for thousands of years. Most recently, transparent clear zircon has been used as imitation diamonds as they tend to be cheaper and can easily be made in a lab. With 7.5 on the Mohs hardness scale, they’re still safe for everyday wear.