The Significance of Birthstones: February and Amethyst

February’s birthstone is the amethyst, a purple stone that is a variety of quartz. With a triangular crystal system, the stone forms by lining a cavity within basalt rock – known as a geode.

Amethyst’s colour ranges from lilac to violet purple. It has been believed to have healing properties for thousands of years: Ancient Greeks believes that the stone protected the wearer from drunkenness and kept them balanced.

Today, amethyst can now be made in a lab as well as being mined, which is a more environmentally friendly way of wearing the stone.

Amethysts have been worn for thousands of years by wealthy and royal families of the world. In Greek Mythology, amethysts were associated with the God of Wine, Bacchus. It was thought to keep the wearer quick-witted in battle and in business.

In the Renaissance, Europeans believed that it calmed lovers that were overrun by passion. Even today, amethysts are given as wedding anniversary gifts. At the time, Catherine the Great of Russia wore amethyst necklaces and earrings.

Wallis, Duchess of Windsor wore a Cartier designed amethyst bib necklace in 1953. It is because of these royal connections that purple is thought of as a regal colour. But for those born in February, amethysts are a symbol of personal empowerment and strength.

Where amethyst is found

Amethysts are found in Russia, Brazil, Africa and South America which all have large amethyst deposits. In Brazil, the Rio Grande do Sul is home to lighter coloured amethysts. In Bolivia, the Anahi mine is a major source of amethyst. Discovered in 1600s, a Spanish conquistador dug the mine before it was forgotten for three centuries before being rediscovered in the 1960s. As well as in South and Central America, Amethyst is also found in the USA near Phoenix, Arizona.

Amethysts are formed in geodes. Firstly, the cavity is formed, and then the crystals are formed inside over the process of thousands of years. An amethyst geode is a hollow rock that has crystals that line the inner walls.

Some geodes are so large that humans can stand inside them, whilst others are small enough to fit inside your palm. Geodes usually form anywhere that was or is volcanically active. Cavities can be formed when cooling lava flows near tree roots or other obstacles on the ground. Then, the lava hardens completely before filling in around the outcrop, which leaves a cavity. The cavities are then filled with a rich liquid that contains trace amounts of iron, and over thousands of years, the liquid forms amethyst. 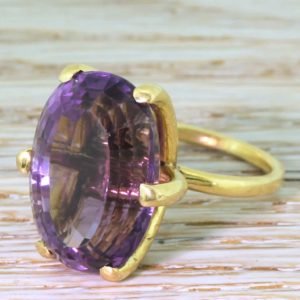 This Late 20th Century Amethyst Solitaire Ring is a stunning example of an amethyst, set on a gold band.

They’re also found, usually cut smaller, in necklaces, brooches, and bracelets, like in this Victorian Amethyst and Pearl Riviere Necklace.

Amethyst has a rating of 7 on the Mohs scale of hardness, meaning that it is appropriate for daily wear in rings and other jewellery. Often, amethysts can be treated to improve their colour by removing inclusions – but this heat treatment can make stones more brittle.

If you have a heat-treated amethyst you may need to be more careful about how you clean it. Amethyst birthstone jewellery should not be steam cleaned, so instead, use a soft brush or cloth with mild soapy water.