Engagement Rings Through the Ages

As in all aspects of design and fashion, jewellery has undergone drastic stylistic changes over the past 200 years. Each trend is distinctive but, in their own unique ways, highly glamorous.

Engagement rings have been worn since the industrial revolution and, as technologies and tastes developed and evolved, their styles have altered through the ages.

Queen Victoria was arguably the most powerful person on the planet during much of the 1800s, so it’s no surprise that she was the guiding influence of fashion and jewellery throughout her time. The discovery of a plentiful supply of high-quality diamonds in South Africa in 1866 contributed to their ubiquity and popularisation, and they soon became synonymous with the engagement ring.

Although early Victorian jewellery still used the more primitive rose cut in many of their jewels, the designs themselves were ornate, romantic and highly detailed – as demonstrated in this stunning 2.80-carat diamond cluster ring, circa 1880. 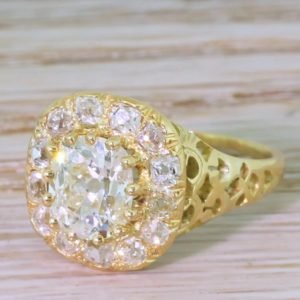 Edwardian jewellery was typically much lighter and more delicate than the jewels from the Victorian era. The increasing use of platinum allowed goldsmiths to hone designs to a fineness they would not dare have attempted in gold. Diamonds were increasingly plentiful – and increasingly popular – and were established as the “go-to” gem for engagement rings. This intricately detailed and elegant Edwardian engagement ring, circa 1910, is a great example of the typical Edwardian style. 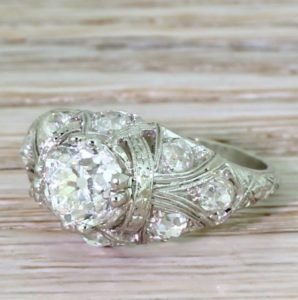 Perhaps the most important period in jewellery development, the Art Deco period saw diverse and accelerated innovation of ring styles. Advancements in technology meant it was cheaper and easier to refine platinum; white gold was “invented.” New gem-cutting techniques heralded the invention of Asscher cuts, baguette cuts and emerald cuts which allowed diamonds to shine in new ways. The ring designs complimented the large, bright stones that were common in this period, as demonstrated best in this 12.87-carat sapphire solitaire ring. 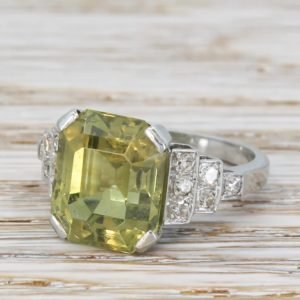 Post-WWII and white diamond rings were still the de facto choice as engagement rings – as De Beers’s famous “A Diamond is Forever” slogan would suggest. But bold, bright coloured gems also became a trend, often paired with diamonds to highlight their more vivid colours. This is exemplified in this stunningly vibrant 9.02-carat emerald solitaire ring. 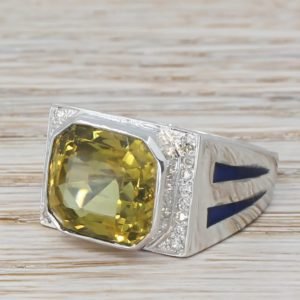