An Introduction To Avant-Garde Jewellery

The avant-garde movement was a cultural movement that set out to bring about a change in the ideas that shape society, through the medium of art and design. The movement was founded during the First World War, by artists, writers, composers and thinkers that opposed convention. Pushing the boundaries of what is assumed to be normal, the artists subverted the status quo through irony and nonsensical themes.

In the world of fashion and jewellery, it’s easy to see how designers of the time were excited by the avant-garde movement.

Although the movement started in the early 20th century, there are still excellent examples of contemporary avant-garde design available today. This stunning Yellow Sapphire & Emerald Ring is particularly unique. Featuring two different gems, each stone has a different colour and size. The contrast works brilliantly against the 18-carat gold. 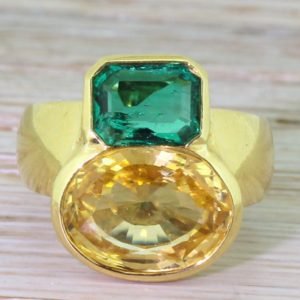 One of the most beautiful, romantic things about antique jewellery is the story that accompanies each piece. With avant-garde jewellery, the history is almost as integral to the value of the piece as the gold and diamonds.

Because of avant-garde jewellery’s uniqueness, owning an antique piece connects you more vividly to the previous owners. You can get a clearer image in your head of how your piece was worn in the past, much more easily than you can with other pieces of jewellery. 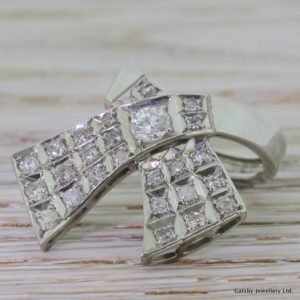 However, the uniqueness of avant-garde jewellery isn’t tied to one time period. The designs remain visually striking, even decades after the pieces were first created. This Ribbon Ring from the 1980s, for example, has a timeless design and looks like it could just as easily have been made in 2018.

The timeless appeal of avant-garde jewellery has ensured that the monetary and symbolic value of these jewellery pieces has increased over the years. When finding genuinely innovative and well-made pieces of jewellery can be so difficult, a bold and daring piece of 20th century jewellery is a great option.

Although some people may simply regard it as unusual jewellery, to others, avant-garde jewellery epitomises true individuality, and the rebellious spirit of the 20th century.

⟵ What Different Types of Bangles Are There?
Back to the blog
Brooches Are Back ⟶