Home / Blog / Cartier vs Tiffany: The Story Behind the Jewellery

Luxury jewellery brands Cartier and Tiffany are often compared to each other. As two of the world’s most well-known jewellers, the names are synonymous with quality and elegance. Vintage Cartier and Tiffany jewellery are often hard to come by, as pieces tend to be passed down the generations, but antique jewellery from either brand will sell for thousands if in good condition – with the price generally increasing the older the piece is.

The Story of Tiffany

Founded in 1837 by Charles Lewis Tiffany and John B. Young, Tiffany was originally named Tiffany & Young. They were the first company to bring gemstones to the USA, after buying jewellery from French aristocrats fleeing France in 1848 during the revolution. By 1853, Charles Tiffany assumed control of the company and renamed it Tiffany & Co.

In 1877, Charles Tiffany bought what is now known as the Tiffany Yellow Diamond after it was discovered in the rough at the Kimberley mine in South Africa. This was quite the risk, as it’s impossible to know how a rough diamond will look when cut. To be safe, gemologist George Frederick Kunz studied the diamond for a year before cutting it. The Tiffany Yellow Diamond is now regarded as one of the most innovative and beautiful in the world.

Just over ten years later, Tiffany bought a third of the French crown jewels, including Empress Eugenie’s diamond necklace. It’s possible that Charles Tiffany was inspired by the glamour of Eugenie on more than one level – her signature colour, robin’s egg blue, has now become synonymous with Tiffany & Co.

Tiffany is recognised as a brand that continues to evolve with the market, remaining relevant and popular throughout the decades. Vintage Tiffany pieces like this stunning Tiffany Double Diamond Ring from 1915 are in high demand. Their beauty, design, and quality are timeless, and the market reflects that. 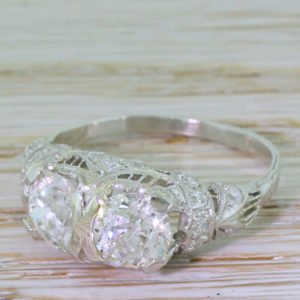 The Story of Cartier

Cartier was founded in 1847 by Louis-Francois Cartier, in a turbulent political and social climate. After the French Revolution, much of France’s aristocracy had fled to surrounding countries but although there was very little of the nobility left in France, Cartier understood that there was still a market for high-quality jewels. In 1899, Cartier opened its boutique on the Rue de la Paix in Paris.  It was a true luxury shopping experience, with plush carpets and beautifully finished glass cabinets that displayed the jewellery to its full advantage.

Cartier was eventually taken international with offices in New York and London, and in 1904, it was awarded the Royal Warrant and became the jewellery supplier of the Royal Court of England.

In 1910, Cartier acquired the Hope Diamond, which had been in French hands since 1668. The diamond is widely regarded as one of the most beautiful diamonds in the world, and also one of the most famous – perhaps due to the curse that it is said to harbour.

After it was acquired by Cartier, the diamond was shown to Mrs Evalyn Walsh McLean at Cartier in Paris, but she required it to be reset. Eventually, she bought it from Cartier in 1911 as a headpiece on a three-tiered setting of large white diamonds, although it was eventually reset again into a necklace.

Antique Cartier pieces such as this White Gold Sapphire Tank Ring are often in high demand, when in such good condition. As one of the world’s leading jewellery names, Cartier continues to push the boundaries of design quality. 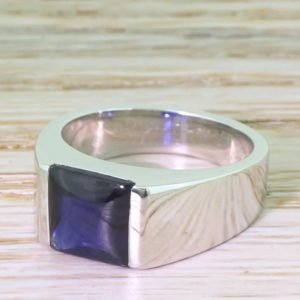 Tiffany or Cartier: Which is better?

Although the two jewellers have a similar clientele, they each have different stories and manifestos– each are experts in their own right.

Tiffany sells high-end jewellery but is also well known for its more affordable silver jewellery which broadens its appeal. Tiffany & Co. designers believe that everyone should be able to own a piece of Tiffany jewellery.

Their robin’s egg blue box with the its wide white ribbon is instantly recognisable and coveted by the world over. Tiffany continues to push the boundaries of jewellery design each year as the Blue Book is released, featuring the most creative, experimental and innovative diamond designs. 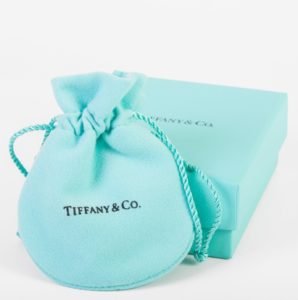 Whilst Tiffany is possibly the most widely recognised across popular culture, Cartier is a French jewellery house whose name is synonymous with royalty. Committed to pushing the boundaries of creativity and design, perhaps their most famous items are Cartier watches; boxed in a large, deep red case, they are owned by some of the wealthiest and most famous people in the world.

Another Cartier favourite is the Cartier love bracelet – a minimal, solid gold bangle with a permanent quality, as it requires a screwdriver to remove it from the wrist. Later editions of the Love Bracelet are made in white gold and rose gold and are studded with high carat diamonds.

Both Cartier and Gatsby are mainstay brands in the luxury jewellery world, and with their enduring appeal, the market for antique Tiffany and antique Cartier pieces has never been more competitive. Which one is better depends on what you’re looking for, but pieces from both brands are guaranteed to make an impact due to their quality and the respective history of each brand.

⟵ Kutchinsky Jewellery: A Celebration of Imagination and Workmanship
Back to the blog
Choosing Between Cluster Rings and Solitaire Rings ⟶