Turquoise is December’s birthstone – a semi-translucent or opaque stone that is blue-green in colour. Often, the stone has rock forms running through it that is called turquoise matrix. Because of its beautiful colour, it has been cherished for thousands of years –  so much so that the word turquoise is often used to describe the colour itself.

In the ancient world, turquoise was thought to have many beneficial powers such as guaranteeing health and good fortune to the wearer or bearer of the stone. In the 13th century, it was particularly used for protecting the wearer from falling off horses. Native Americans believed that if you followed a rainbow to its end, you’d find turquoise. It was also thought that if a warrior attached a turquoise stone to their bow or firearm, it would make their aim more accurate.

Where is turquoise found and how is it formed?

The stone is commonly found in Iran and has been mined in the Nishapur district for a 1000 years. China is the world’s largest producer of turquoise, but it’s also found in Arizona and Nevada in the USA. These regions all share a commonality – they are arid.

Turquoise is formed in these areas when rainwater containing minerals like copper and aluminium gets into rocks through cracks or fissures. The chemical reaction caused by these mineral traces coming in contact with primary minerals in the rocks, whether that’s chalcopyrite, carbonates malachite, or azurite, produces veins of turquoise.

These veins eventually form together into clumps that have no discernible external shape but can grow to large sizes. The colour of the turquoise that’s formed is affected by what primary minerals were involved in the process, with copper adding blue tones while iron contributes green. Trade professionals will often refer to different types of turquoise as being ‘robin’s egg blue’, ‘sky blue’, or ‘Persian blue’.

The word turquoise dates back to the 13th century, from the French expression ‘pierre tourques’, referencing the stone’s journey from Turkey to Europe. Today, the December birthstone is associated with meanings of freshness, femininity, tranquillity, intuition, serenity, creativity, emotional balance, and loyalty.

Turquoise has been a popular semi-precious stone for centuries, but it was especially popular in Victorian times thanks to its bold colour and relatively high availability. As such, there’s a wealth of antique turquoise jewellery in the market, primarily from Victorian times.

This Turquoise and Diamond Bar Brooch from 1890 is stunningly simple and could be worn today with any number of outfits. 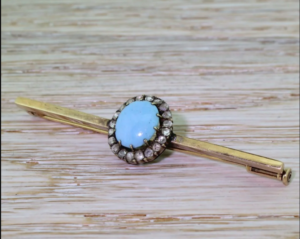 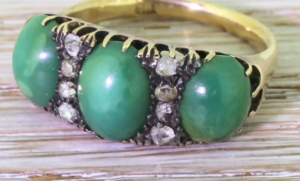 How to clean turquoise jewellery

Some turquoise can be treated to improve its durability, appearance and polish – and this could affect the way in which it should be cleaned. High heat can cause discolouration and breakage in the stone, so it’s best to stay away from cleaning turquoise with steam or ultrasonic cleaners. Turquoise may also be discoloured by chemicals, cosmetics, skin oils and perspiration, so it’s best to clean everyday dirt with water and a microfibre cloth.

⟵ Toi et Moi Rings: Unusual Engagement Rings
Back to the blog
The Intriguing History of the Choker Necklace ⟶