Home / Blog / Everything You Need To Know About Antique Bracelets

Everything You Need To Know About Antique Bracelets

There are few gifts quite as special as a carefully selected piece of antique jewellery, with antique bracelets being one of the most versatile jewellery types for gift giving.

Given the changing trends of the jewellery world throughout the years, each and every era in fashion has brought with it its own signature styles of bracelets.

Chains, bangles, charm bracelets – there’s an antique bracelet to beautifully adorn every wrist, whatever your taste.

Read on for a deeper look at the bracelet designs at the forefront of fashion throughout history and allow us to introduce you to some of the most incredible antique bracelets within the Gatsby collection.

Before the beginning of the Georgian era (1714 – 1837), jewellery was a luxury reserved only for those at the forefront of high society – and not just due to the cost.

Pre-1700, there had been parliamentary laws put in place dictating who in society was allowed to wear different jewellery in an attempt to maintain clear boundaries between the classes.

At the beginning of this era, however, such laws were seen as both outdated and generally unnecessary, going largely ignored. As a result, jewellery was worn increasingly by the middle and upper classes, no longer reserved only for aristocracy and royalty.

With Georgian women keen to take advantage of this changing view, the demand for jewellery was higher than ever before, leading to jewellery makers of the time beginning to produce a much wider range of increasingly opulent designs.

Those in Georgian society felt that you could tell a lot about the standing of a woman from her jewellery, so intricately designed bracelets were a must-have. Gold was the most popular metal used in Georgian bracelets, with favourable motifs including foliage, crescents, feathers, bows and a variety of floral designs.

Throughout the era, two design styles dominated the world of jewellery making. The first was Baroque, represented in bracelets by sophisticated and often symmetrical cuts and designs, usually as part of a cuff-style bracelet.

Baroque later made way for the popularity of the Rococo style, which came into fashion throughout the 1730s and featured many of the signatures of Baroque, just with a more playful and delicate feel. Foliage, flowers and feathers remained popular motifs, though there was far less focus on symmetry, with designs instead becoming a little ‘busier’ and more whimsical.

Coloured gemstones began to appear more commonly in jewellery from 1750 onwards, with rubies, sapphires, topaz and garnets amongst the most popular. Until this point, early Georgian era jewellers favoured diamonds and pearls.

The Victorian era was a time of great innovation for many industries, jewellery making being just one of them.

The improved materials and equipment available to jewellers meant that they could not only create more ambitious designs than ever before, but that they could do this with far more ease and at a much quicker pace, bringing about the beginning of mass jewellery production.

With this, jewellery pieces were more accessible than ever before, though many designs in this era were no less ornate than they had been in the Georgian period before it.

When it came to bracelets, this desire for opulence was represented by the continued popularity of gold, still by far the precious metal most frequently used in jewellery manufacturing at the time.

However, it was increasingly rare to encounter a wealthy woman with a plain gold bracelet around her wrist. In the Victorian era, less was rarely more – bracelets favoured by the upper class often incorporated multiple varieties of gemstones, as well as intricate engravings.

Popular gemstones at the time were rubies, emeralds, sapphires, opals, pearls and, of course, diamonds. Engravings usually featured one of the eras prominent motifs, each of which came with its own meaning and symbolism – doves, flowers, snakes, stars and crescents were amongst the most favourable, representing sentiments of love, friendship and good fortune.

Cuff bracelets were no longer quite as popular as they were in the 18th century, with chains and bangles taking precedence. The Victorian era also saw the rising popularity of charm bracelets, a favourite style of Queen Victoria herself and one which remains a must-have within any jewellery collection today.

By the time the Art Deco period arrived, jewellers had the capabilities to produce more grandiose designs than ever before – and just in time, too.

The Art Deco period, following the end of the First World War and the arrival of the much-romanticised Roaring Twenties, was a time of extravagance, something reflected very clearly within the popular design signatures of the time.

Bold shapes, clean lines, symmetry and geometric patterns were all popular design tropes of the Art Deco period and were utilised to great effect in the jewellery of the time. This was a period during which bangles rose to peak popularity, thanks in part to their modest shape and cut, which could be accentuated beautifully by the addition of bright gemstones.

When it came to the stones themselves, it was all about size and complexity. This was a real era of ‘the bigger, the better’, with large gemstones in intricate and complex arrangements becoming a particularly popular feature of Art Deco jewellery. 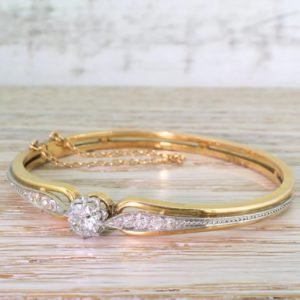 Whilst this is most common amongst the engagement and cocktail rings of the time, bracelets also became increasingly lavish.

This was also the era that the use of silver truly came into its own, not simply as a cheaper alternative to gold but as a precious metal chosen for its versatility and the way that its colour complemented popular gemstones of the period, such as sapphire and emerald.

The glamour and extravagance of Art Deco bracelets make them an excellent choice of antique jewellery gift if you are looking to give a loved one a statement piece for special occasions, rather than a subtle piece intended for more frequent wear. 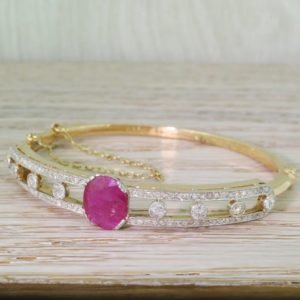 How to take care of an antique bracelet

If you’re planning to invest in an antique bracelet, it’s worth familiarising yourself with the most effective ways to preserve its beauty while keeping the bracelet clean.

When cleaning any antique jewellery, you should always avoid the use of harsh chemicals such as bleach or ammonia and should never submerge your jewellery in water for prolonged periods – a few minutes underwater should be more than enough to loosen any dirt or grime.

Instead, use warm, soapy water and a soft toothbrush or a lint-free cloth to clean the piece, ensuring that you take special care when cleaning between gemstones to avoid loosening them.

Proper care advice may vary depending on the gemstones set within the bracelet or the condition that the bracelet was in to begin with, so be sure to do a little extra research if necessary.

We’re proud to offer a stunning variety of antique jewellery pieces at Gatsby Jewellery, with antique bracelets making up just one side of our incredible range.

If you are looking to give someone you love a gift that they’ll truly never forget, there’s sure to be something just perfect within our extensive collection of antique and vintage jewellery.

For more information or to arrange a viewing appointment for any piece at Gatsby Jewellery, contact us today.

⟵ A Guide To Victorian Jewellery
Back to the blog
What Is A Promise Ring? ⟶