Home / Blog / Kutchinsky Jewellery: A Celebration of Imagination and Workmanship

The history of Kutchinsky jewellery

The first shop was on Commercial Road, where they became well known for their fine platinum and diamond jewellery. By 1928, Joseph Kutchinsky, then only 14, the youngest grandson of the “first” Kutchinsky’s, began his long and successful career in the family business.

Known simply as ‘Jo’, Joseph Kutchinsky was a natural salesperson and worked to instil the core values of the business – quality products and excellent service – into everything the brand produced. By 1958, the shop on Commercial Road had become a mecca for lovers of fine jewellery and, with this success, they made a move to London’s Knightsbridge. Kutchinsky jewellery had gained a reputation for being extravagant, theatrical and exuberant – a celebration of the end of the war and the availability of luxury goods.

Today, Kutchinsky jewellery stands out against a backdrop of mass-produced items. Its uniqueness is a leading factor in the brand’s timeless and iconic status and has also contributed significantly to the demand for and value of the jewellery.

One example of this is the Kutchinsky transitional cut diamond engagement ring which was made in 1947 and purchased originally for £4,000. This original sale price translates to £140,000 in today’s money, but the ring currently comes with a valuation from Kutchinsky themselves for £65,000.

Stylistically, the brand is intrinsically linked with experimentation. This experimental streak is present in the use of form and colour, precious gemstones, and high-quality craftsmanship. It’s the stylistic freedom that makes Kutchinsky pieces so sought after by collectors. The value of the jewellery often doesn’t lie exclusively in the intrinsic value of the materials used, but that they so beautifully encompasses the spirit of rebuilding and starting again. The jewellery created by this distinctive brand is physical evidence of an optimism that so starkly contrasted with the preceding years of destruction, uncertainty, and deprivation.

Because of its symbolic link with a specific period in British history, Kutchinsky jewellery is highly sought-after in the antique world. Its rarity makes it inherently valuable, and the distinctive and masterful construction of every piece solidifies its reputation.

Antique pieces like this Kutchinsky engagement ring offer the chance to get a ring that’s truly unique, and increasingly rare. 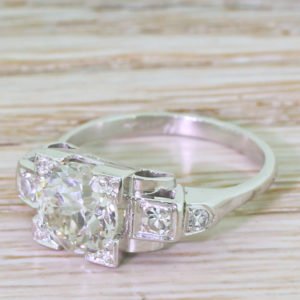 Jewellery collectors with artistic tendencies also favour Kutchinsky jewellery, exemplified by Mahnaz Ispahani Bartos. She considers Kutchinsky as one of the strongest forces in the jewellery world and uses pieces in her exhibitions to help tell the story of innovation during certain periods in British jewellery history.

For Mahnaz, Kutchinsky represents the intersection between war and beauty, much like the story of Mahnaz’s life, who started collecting beautifully designed and conceptual jewellery during and after her long career as a war correspondent.

For her and other collectors, Kutchinsky is a one of a kind jeweller that has, above and beyond its promise as producer of jewellery, become an enabler of imagination and workmanship.

⟵ The Times That Shaped Edwardian Jewellery
Back to the blog
Cartier vs Tiffany: The Story Behind the Jewellery ⟶