In the immortal words of Ms Monroe herself, “Talk to me Harry Winston, tell me all about it!”

This line from the iconic song “Diamonds Are A Girl’s Best Friend”, from the 1953 film Gentlemen Prefer Blondes, places Harry Winston among brands like Tiffany’s and Cartier as the best of the best.

Harry Winston was and continues to be, one of the most glamorous and illustrious jewellers the world has ever known. His jewellery design was revolutionary, and his collection extensive. To this day, it continues to be a name synonymous with being the best there is.

Who is Harry Winston?

Winston was born in 1896 in New York City, the son of Ukrainian immigrants. His father owned a small jewellery store, and it was here that Winston first developed his love for gems. Winston worked for his father throughout his childhood, learning the trade and how to run the business – and, more importantly, developing an eye for precious stones and the skills necessary to produce and improve jewellery.

Famously, when Harry was 12, he purchased a 2-carat emerald from a pawn shop for 25 cents – before selling it two days later for $800. Using these skills, he began his own company in 1920 and opened his first store in New York in 1932. Winston created his pieces by transforming pieces of already made jewellery. He found that estate sales were the best place to acquire large collections.

His empire truly began when he purchased the collection of Arabella Huntington, the wife of a railroad mogul. He took her collection, comprised mainly from Parisian jewellers like Cartier, and transformed the old-fashioned pieces into more contemporary work. This work continued throughout his career until his death in 1978, and the House of Harry Winston commits to innovative jewellery design to this day.

Because of his unique mode of creation, Winston was a visionary in jewellery design. He decided that gems shouldn’t be hidden or upstaged by complicated metalwork – that rather the gemstones, or in most cases diamonds, should be the star of the show (like these simplistic earrings that showcase the beauty of the sapphires and diamonds).

Each piece of jewellery was intended to highlight the natural beauty of the stone, and the individual style of the wearer. This is seen in this large sapphire accentuated by a thin chain. He would take these stones from older pieces and highlight them in new ones of his own, using skills accumulated from a childhood spent working. 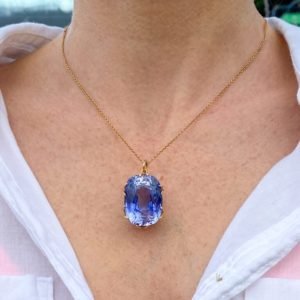 He was not only capable of jewellery design but could even cut diamonds to highlight their natural shape and beauty. He was often inspired by the world around him, most notably by the snow on a Christmas wreath which inspired his clustering technique and subsequent wreath necklace. He would combine diamonds of different shapes to create striking and intricate designs – but the focus was always on the stones. This emphasis on simplicity and purity continues today, with one of his most popular designs being a pair of diamond stud earrings.

Over time, Harry Winston has become known as the ‘king of diamonds’ due to his extensive diamond collection. It is estimated that he owned one-third of the world’s most famous diamonds at some point in his career. He obtained some of these diamonds from estate sales, and some he purchased in their rough state and cut himself.

He owned the Hope Diamond – a large blue diamond with records of ownership dating back four centuries. He purchased this at the estate sale of a wealthy socialite named Evalyn Walsh. This diamond is the centrepiece of a pendant, surrounded by 16 white diamonds.

He also owned the Jonker diamond, which remains the largest ever diamond to have been cut in the United States. Another notable diamond in his possession was a 68-carat pear-shaped diamond, which he cut himself. He sold this diamond to Richard Burton, who then gave it to Elizabeth Taylor – this diamond is more commonly known as the Taylor-Burton diamond.

Jeweller to the stars

Winston wanted to use Hollywood, in the midst of its Golden Age as his company debuted to society, to highlight the glamour and excitement of jewels and bring them to a broader audience. He wanted to make diamond jewellery a staple feature of luxurious life, and adorning actresses with his work was the best way to do that.

He was the first jeweller to loan his diamonds to an actress for the Academy Awards in 1944, now a time-honoured custom for award shows worldwide. Not only did his diamonds feature on red carpets, but they can be spotted in many films too; from Notorious, to The Graduate, and even in How To Lose A Guy In Ten Days. Dressing famous faces, and even heads of state is a tradition upheld by the House of Winston to this day.

Winston’s legacy is more than just iconic jewellery and loaned diamonds. He was also a prolific philanthropist throughout the entirety of his career, focusing particularly on the wellbeing of children. In 1940, only 17 years after his company was fully realised, he sent his most treasured diamonds on a tour of the US to be displayed. He donated the proceeds in every city to local children’s charities.

He donated the Hope Diamond, free of all charge, to the Smithsonian Museum in 1958 as a “gift to the world”, where it remains to this day. This philanthropic nature is now core to the House of Harry Winston, and the current board of the company continue to donate. They host a Brilliant Futures programme, which donates funds to children’s projects globally. Winston used his wealth and diamonds to give back, and his company still fulfils his wishes.

⟵ How To Plan A Vintage Wedding
Back to the blog
What Is A Cocktail Ring? ⟶