Jean Dunand, an Art Deco designer and sculptor distinguished by his unmatched genius in lacquer, is widely regarded as one of the few Western artists to have practised the Japanese style of lacquer execution. Primarily concerned with lacquer, Dunand also became renowned for his distinguished dinanderie (fine cast metalwork), establishing him as one of the foremost Renaissance artists of the Art Deco period.

Jean Dunand was born Jules John Dunand in Petit-Lancy, Switzerland (a former French municipality, handed to the Swiss after Napoleon’s defeat) in 1877. The son of an esteemed goldsmith, Dunand followed in his father’s footsteps toward a life in the decorative arts.

Dunand left for Paris in 1897, continuing the studies he started at the École des Arts Industriels de Genève. Soon after his arrival, Dunand became an apprentice to the revered sculptor, Jean-Auguste Dampt. After three years of honing his craft under Dampt’s tutelage, Dunand exhibited a bust he sculpted at the Exposition Universelle in Paris, 1900. Nine years later, he legally changed his name from Jules to Jean.

Dinanderie and honing his craft

Dunand broadened his artistic scope; experimenting with dinanderie (derived from Dinant, Belgium – the place of its invention), working mostly with copper. With copper as his canvas, Dunand developed a distinctive, geometric style reflective of the burgeoning Art Deco scene.

In 1904, the Musée des Arts Décoratifs purchased one of his dinanderie vases, establishing his status as a master sculptor. His unprecedented artistic flair led to regular dinanderie exhibits at the Salon de la Nationale des Beaux-Arts and the Salon d’Automne along with his contemporaries Rodin and Renoir, immortalising Dunand’s name into Art Deco design folklore.

Notwithstanding his stunning dinanderie creations, it was his work with lacquer that made Dunand truly famous. In 1912, he came in contact with the esteemed lacquerware artist Seizo Sugawara, who offered to teach Dunand Japanese lacquer techniques in exchange for his metalwork expertise. Dedicated and naturally skilled, Dunand eventually opened a lacquer workshop, employing over a hundred of the best craftsmen from Indochina.

Despite the notorious difficulties inherent working with lacquer (due to its irritating effect on the skin and eyes), Dunand mastered it, before integrating eggshell into his work in 1925. This painstaking process involved using tiny shards of eggshell to create intricate patterns under the lacquer layers, and he used the method to create everything from small accessories and vases to monumental wall panels and even entire rooms.

Dunand’s lacquer prowess earned him several prominent, profitable commissions, including the luxurious ocean liners Ile de France (1927) L’Atlantique (1931), and the peerless Normandie (1935). Years prior, in 1925, he participated in the Paris Exposition by designing a room for the French Embassy

Dunand died in 1942, having achieved the title Marshal of France for his honourable duty in the First World War, as well as an enduring influence on French Art Deco.

While Dunand was a master sculptor, his style can be seen in many Art Deco jewellery pieces. Below, we collected some of our favourite pieces reminiscent of Dunand’s distinctive style. 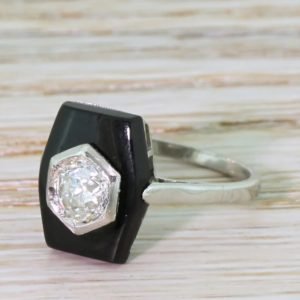 This striking onyx and diamond ring features a glowing white old European cut diamond secured in a hexagonal, platinum setting – evoking Dunand’s penchant for geometrics. The diamond’s radiance contrasts dramatically with the long, hexagonally shaped onyx. The head of the ring sits on a simple, open gallery leading to a slim platinum shank. 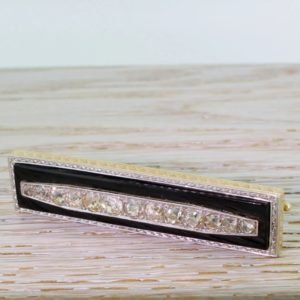 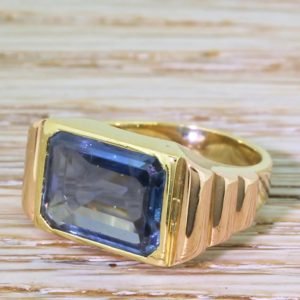 ⟵ What is Marcasite Jewellery?
Back to the blog
Different Types of Necklaces ⟶