Born into a family of metal foundry workers in Paris in 1927, Robert Goossens became a 20th-century jewellery icon, best known for his extravagant rock crystal sautoirs and Byzantine cuffs, which earned him the moniker Monsieur Bijou (Mr Jewel).

Goossens began his career as a fifteen-year-old apprentice, spending his formative years crafting small, intricate snuffboxes and lighters for pioneering Parisian jewellery houses, such as Cartier and Mellerio. However, his true love was jewellery, and he swiftly began perfecting the techniques of casting, engraving, and embossing semi-precious and simulated stones into gold and silver. In the ensuing decades, Goossens created a wealth of exquisite jewellery pieces, blending artificial gems with semi-precious stones – à la Kenny Jay Lane – for the likes of Coco Chanel, Yves Saint Laurent, Cristóbal Balenciaga, and Christian Dior.

The paintings and artefacts Goossens admired in Parisian museums heavily influenced his designs, and he drew particular inspiration from Byzantium, Maltese, and Renaissance works.

Goossens travelled extensively, frequently bringing back precious stones such as rubies, amethysts, sapphires, chalcedony, and coral. However, it was rock crystal that became his favourite stone after he restored a cross belonging to Gabrielle ‘Coco’ Chanel – a colourless variety of quartz said to be Coco’s most treasured piece of jewellery.

Goossens, however, became the first to set it into pieces of jewellery because he regarded its delicate and inexpensive attributes as well suited to costume jewellery – and the perfect antidote to traditional jewellery. Pearls, shells, and bronze completed his variegated material range, which he encrusted into brooches, bracelets, necklaces, and earrings.

Work with the Maison Chanel

Goossens earned his ‘Monsieur Bijou’ moniker courtesy of a career-defining collaboration with the iconic Coco Chanel, whose demands were so great Goossens set up a mobile atelier in his truck. Chanel coveted Goossens’s blended style, which reflected her penchant for amalgamating haute couture with less valuable materials.

Notable works during his tenure at Chanel includes silver and gold-plated pins set with emeralds, moon earth pendants, and crystal Byzantine crosses. Goossens would create original pieces for Coco made of real gold and genuine stones; designs he replicated as imitations for fashion shows and presentations, which ultimately served as the blueprint for Chanel’s costume jewellery designs.

Goossens continued his work with the Maison Chanel after Coco’s passing in 1971, collaborating with her successor, Karl Lagerfeld through the 1980s and 1990s, until Chanel bought Goossens’s workshop in 2005.

Following Coco’ death, Goossens continued to elevate ‘the true nature of faux’ during the 1970s, first with Madame Grès, and later Marc Bohan at Christian Dior. By the middle of the decade, he embarked on his second defining collaboration, this time creating African inspired collections for Yves Saint Laurent. Before long, Goossens was crafting everything from hand mirrors to limited-edition perfume bottles for YSL – their association drawing to a close only after Saint Laurent drew curtains on his couture house in 2002.

Goossens’s original workshop north of Paris is still operating to this day, employing about fifty people to handcraft his designs. Moreover, some of his works are part of the Musée des Arts Décoratifs collections.

Robert Goossens died at the age of 88, survived by his daughter, Martine, and his son, Patrick, who oversee the artistic direction of his company’s objects and jewellery, respectively.

Antique jewellery in the style of Robert Goossens 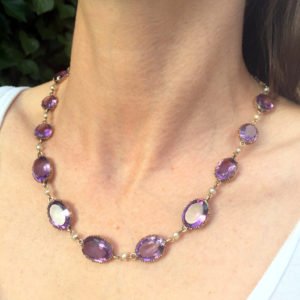 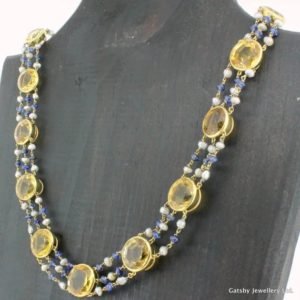 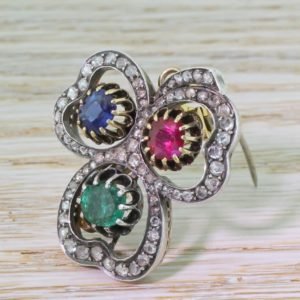 Like Goossens’s experimentation with materials, this stunning Victorian piece is comprised of emerald, sapphire, ruby, and diamond, and can be worn as either a brooch or a pendant. 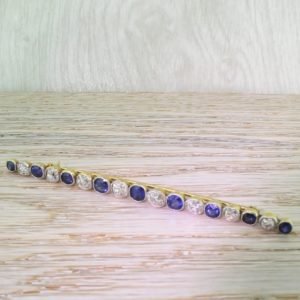 ⟵ The Significance of Birthstones: January and Garnet
Back to the blog
What is Marcasite Jewellery? ⟶