Home / Blog / The History Of Cufflinks

The History Of Cufflinks

Cufflinks have been popular for centuries, first emerging in the late 17th century during King Louis XIV of France’s reign. Their history is inextricable from the shirt’s, which men have been wearing since the invention of woven fabric in 5,000 BC. Traditionally the shirt was considered an undergarment, therefore showing a shirtsleeve would be regarded as improper; however, attitudes changed over time, and a need to fasten shirt cuffs emerged.

Although styles and manufacturing methods have changed, the underlying form remained the same: a tunic opened to the front with sleeves and collar. This article charts the history of one of men’s most iconic fashion staples: the cufflink.

Before the cufflink’s invention, shirt cuffs were fastened with ribbon or string. However, in the later years of Louis XIV’s reign, fashionable gentlemen began using pairs of buttons – often painted with miniatures of loved ones or a notable figure – joined by a small chain to fasten their sleeves. Cufflinks continued to be worn by fashion-conscious Europeans of high society throughout the 18th century.

The evolution of cufflinks during the Industrial Revolution

In the 19th century, the industrial revolution triggered a monumental rise in production, while the process of electroplating precious metals also accelerated. These enhanced processes enabled the newly employed classes to accessorise the emerging wardrobe comprising a dark day suit and a dinner jacket or tailcoat after sunset.

By the mid-1800s, the demand for cufflinks emanated from the whole economic spectrum, from the working class to the bourgeoisie. Consequently, the shirt front, collar, and cuffs covering areas of the most wear were made sturdier – this was practical, but when clean and starched, collars and cuffs also typified the formal character of the clothing.

By the 1840s, cufflinks assumed their recognisable form – gold, silver, or pearl buttons held together by a brass chain. It was not only men who wore cufflinks, mind – women also wore them as shirts with buttons attached were rare. Despite the release of sport shirts and the resurgence of unstarched cuffs in the 1920s, cufflinks remained popular with men, a steady demand prompting manufacturers to produce cufflinks for all social classes during the Great Depression and World War II.

Following the end of WWII shortages, the 1950s gentleman adorned himself with an array of accessories, comprising items such as a cigarette case, lighter, tie pin, watch, ring, key chain, money clip, etc. – an ensemble that also included a wide range of cufflinks.

The popularity of cufflinks sharply declined in the 1960s and 70s; however, their style and utility less favoured among the Woodstock generation’s penchant for buttoned shirts. Moreover, many fine heirlooms were reworked into earrings befitting the era’s aesthetic. The ensuing decade saw traditional cufflinks regain favour as part of a general revival in traditional male dress, which continues to this day. 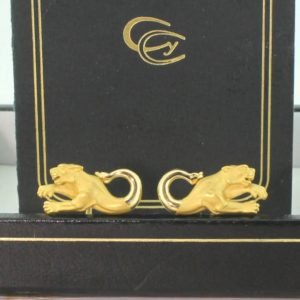 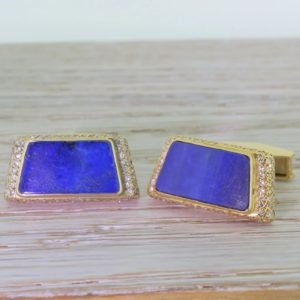 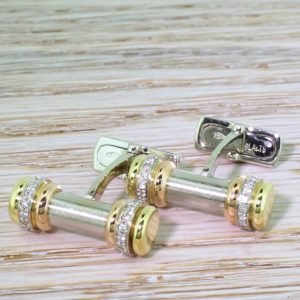 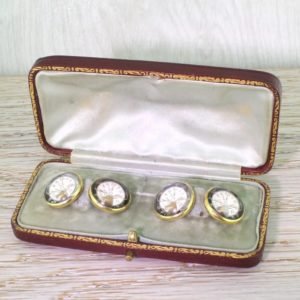 Depicting Elks Lodge, these finely crafted Edwardian cufflinks are backed in 18k yellow gold and feature a reverse cut and painted rock crystal, commonly referred to as an Essex Crystal.