Home / Blog / What Is A Ballerina Ring?

What Is A Ballerina Ring?

Inspired by the shape of a ballerina’s tutu, ballerina rings often simulate the flowing movement of a ballerina dancing. Typically, they feature a central stone, or cluster of stones, surrounded by a halo of baguette gems (usually diamonds).

The baguette stones encircling the centre usually undulate  to reflect the movement of a tutu, and almost portray what a ballerina might look like from above – as seen in this mid-century ruby and diamond ballerina ring. 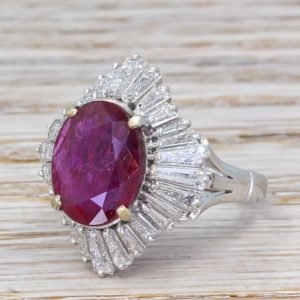 However, these rings aren’t always circular and can come in many different shapes and sizes.

They can be set solely with hand-cut diamonds or a myriad of different coloured gemstones. Many ballerina rings are, therefore, entirely unique, due to the multitude of different interpretations. They are impressive rings both in complexity and size and were drastically popular throughout the mid-20th century.

When was the ballerina ring invented?

Despite their popularity, it isn’t known who first designed the ballerina ring. During the 30s, 40s, and the Golden Age of Hollywood, jewellery design became much bolder than ever before.

Pieces were crafted to be more eye-catching and dazzling, indicative of silver screen glamour. Whilst there may have been some predecessors in this era, the ballerina ring itself was invented in the 1950s and soared to popularity in the decades that followed.

In the 1980s, it stayed popular as a form of cocktail ring, when extravagant jewellery was in vogue.

Whilst it isn’t known who designed the first ballerina ring, they were popular amongst some of the most prestigious jewellery houses in the 1950s. Designers from Tiffany, Boucheron and Oscar Heyman Brothers all created complex and beautiful ballerina rings. The skill in creating a ballerina ring involved meticulous precision and exactness in the cutting and placing of the gemstones.

The stones have to work together in perfect harmony in order to create the illusion. Therefore, the beautiful ballerina rings we see today are products of high-jewellery design and mastery of skill.

How to wear a ballerina ring

Because ballerina rings are such massive statements, they should be regarded as such.

Traditionally, they were worn on the right hand to avoid confusion with any engagement rings or wedding bands. They can be worn on any finger and can be the perfect accessory to a plain outfit, allowing the ring to be the focal point.

However, we also love ballerina rings as unique and glamorous engagement rings. Each ballerina ring is open to adaptation and personalisation, so you could have one made that no other person could. Rules are made to be broken, and jewellery can be worn in any way you want it to – it’s all about personal taste.