Home / Blog / What Is A Cocktail Ring?

What Is A Cocktail Ring?

A cocktail ring is an exuberantly large ring, often set with a colourful precious stone in a complex design or surrounded by diamonds. Cocktail rings have been around since their inception in the 1920s and have consistently come back into fashion ever since. They are ostentatious, expensive, and, most importantly, intrinsically linked to a sense of fun.

Cocktail rings first appeared in the 1920s during Prohibition, when cocktails themselves were invented to disguise alcohol and make low-quality bootlegged concoctions drinkable. Anti-prohibition parties were a magnet for the upper-class. They were associated with socialising and illicit drinking – particularly glamorous qualities.

During this era, women gained many rights and freedoms. In many countries, women gained the right to vote, and with these newfound rights came a new attitude. Hair got shorter, as did dresses, and women began to frequent cocktail parties, accompanied or alone. They could smoke, drink, and have as good a time as any man could. Because of all of these factors, women wanted to show that they were self-sufficient, and what better way to do so than to sport a huge, lavish ring?

Whilst Art Deco design was centred around streamlining and sharp geometric shapes; fashion was all about glamour. Cocktail rings displayed the decadence of the era’s style, as seen in this ruby cocktail ring, circa 1920. With cocktail rings, the bigger the better. The brighter the ring, the more interesting the wearer was perceived to be. 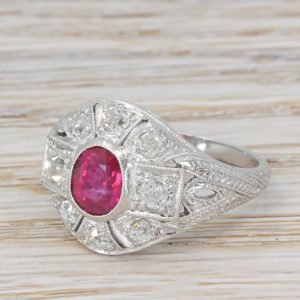 Cocktail rings continued to grow in popularity throughout this period and reached their peak in the 1950s. A great economy and more conspicuous consumerism meant that people were buying houses, cars, and household appliances, and alongside these materials came the necessity to entertain. So, cocktail parties made a resurgence, and so did the matching rings. If anything, the rings were more colourful and extravagant during this period, with larger stones as seen in this aquamarine ring from 1950. 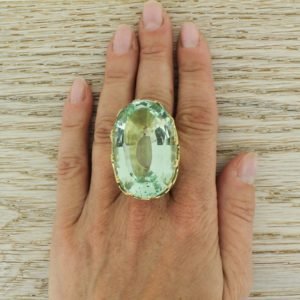 They saw a decline in popularity with the hyper modern fashion of the 60s, and even more so in the stripped back style of the 70s. However, the vibrance of the 80s and all its neon glory allowed cocktail rings to find their place again, and they have continued to be popular for formal events until the present day.

Characteristics of a cocktail ring

Initially, cocktail rings were made of platinum, and in the 1920s featured massive jewels like diamonds, sapphires, emeralds, rubies and aquamarines. As time has passed, the classic cocktail ring has stayed the same in many respects, but since the 50s encompasses a wider variety of designs. They became more intricate, like this baguette diamond and sapphire ring, but retained their flashiness. 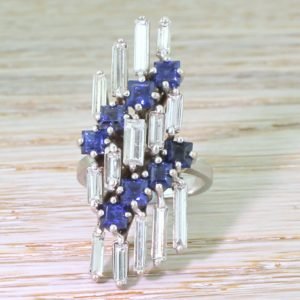 Most statement rings are still the classic design: a large stone, flanked by other stones or diamonds. Generally speaking, there was no definition of what was or wasn’t a cocktail ring when they were invented in the 1920s. Then, and now, anything goes.

How to wear a cocktail ring

As these rings were designed to be the life of the party, they traditionally should be reserved for galas and cocktail parties. They’re more extravagant than your everyday pieces, which inclines people to save them for big occasions. However, more people like to combine casual and formal wear now than ever. You should wear jewellery whenever and however you’d like.

Whilst a cocktail ring is highlighted as the focal point of an outfit when it is paired with a little black dress, they can also look great with a simple white shirt and some jeans. These rings aren’t cheap, so if you want to wear them every day, we say go for it! A simple cocktail ring design, such as this chunky rubellite ring, can look fabulous no matter the outfit. 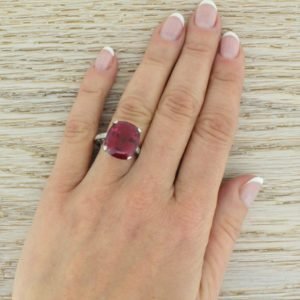 Cocktail rings are traditionally worn on the right hand, so as not to confuse them with engagement rings or wedding bands. This also allows them to live up to their full, eye-catching potential. They are also usually worn on the ring finger, but many people also like to wear them on their index. Again, anything goes!

⟵ Spotlight On: Harry Winston
Back to the blog
The Significance of Birthstones: January and Garnet ⟶