Home / Blog / What is Marcasite Jewellery?

What is Marcasite Jewellery?

Used for millennia, marcasite is a gemstone that features in many distinctive jewellery pieces. The term ‘marcasite’ generally refers to jewellery set with the semi-precious stone, but also to jewellery made from silver with tiny pieces of its chemical twin, pyrite. Marcasite creates a uniquely intricate design that is instantly recognisable, and it’s for this reason it’s such a sought-after vintage gemstone.

This article defines marcasite and its sister stone pyrite, chart their history and share our top tips on looking after your marcasite jewellery.

Marcasite is a metallic stone that is incredibly brittle with low hardness. Its brittle nature makes it unsuitable for everyday wear as jewellery, which is surprising since it is used solely for this purpose today. However, marcasite is the perfect replacement for more expensive materials like diamonds because of its high shine and low price tag. Due to its fragility, many marcasite jewellery pieces also contain pyrite – more commonly known as fool’s gold.

Marcasite and pyrite are sister stones – they have the same chemical makeup but slightly different crystal habits. This makes pyrite stronger and more durable than its brittle relative, which is why it frequently appears in marcasite jewellery. In fact, pyrite was referred to as marcasite until the 19th century, when it was found to be fundamentally different. This is precisely why most marcasite jewellery features pyrite as the main compound.

The history of marcasite

Marcasite was first used in jewellery as far back as ancient times, with Greeks, Thracians and Egyptians featuring the stone in their embellishments – Cleopatra herself was said to have worn marcasite.

Incans also used both marcasite and pyrite in their jewellery and tools of ritual sun worship, such as plates and mirrors. Aside from this, marcasite jewellery has been found in burial chambers all over South America.

In the Victorian era, marcasite made a resurgence following the death of Prince Albert in 1861. Victoria entered a lifelong period of mourning, which saw her and the ladies of her court wear only black and less extravagant jewellery. Marcasite was a good alternative for bright (and expensive) diamonds, so this became a suitable substitute for nobility and common folk alike.

In the 1920s, marcasite was used in the iconic ‘light/dark’ contrast of the Art Deco era alongside large gemstones like onyx and sapphire. It was often set alongside a large gemstone, the centre of the piece, with intricate detailing created by the marcasite around it. This sapphire solitaire ring is reminiscent of this style, although it opts for the more expensive diamond instead of marcasite to highlight the large sapphire. Marcasite was also used to create inexpensive jewellery of a similar nature, commonly featuring jet. 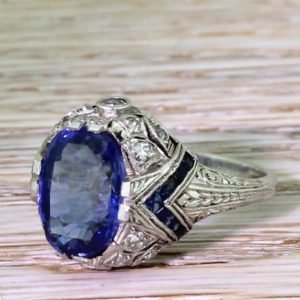 How much is marcasite jewellery worth?

Marcasite jewellery is often inexpensive due to its brittleness, so it is best to determine value based on individual pieces. As mentioned above, marcasite was often used to highlight other gemstones, so they should be considered as part of a piece’s overall value.

You should also look at the design, size and branding of the piece to determine its value. Additionally, it is also important to remember that marcasite was used in place of diamonds in many circumstances. As such, many pieces of vintage jewellery may have the effect of marcasite without the fragility, such as this Victorian diamond and pearl brooch, but these pieces have a justifiably higher value. 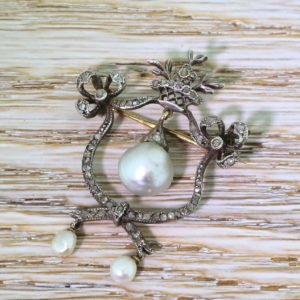 How to look after marcasite jewellery

The main thing to note when cleaning marcasite jewellery is that it is soft and brittle, so you must be gentle and avoid using anything abrasive. Also, be wary of the metal used and care for that appropriately and consider any other gemstones in the piece.

Usually, a very soft cloth with lukewarm, soapy water should clean the piece and help to lift out any dirt. When cleaning your marcasite jewellery, be particularly careful not to dislodge the small stones. If you notice that any are coming loose, take it to be repaired if you can. You should thoroughly dry it, both manually and by leaving it in an open space on top of a dry cloth to soak up any excess moisture.

You should avoid using anything abrasive to clean your piece, even if it is a soft jewellery brush. You could run the risk of scratching or damaging the jewellery.

In terms of storage, you must not store your marcasite jewellery in a wooden jewellery box alongside your other items. Wood is corrosive to delicate material. Best practice is to store it in a velvet pouch, which will prevent it from scratching. Ideally, you should also store it somewhere away from light or moisture, which should prevent it from tarnishing.