How to Identify Victorian Jewellery

One of the joys of a piece of antique jewellery is to delve into its history.

Each piece is like a little time machine and has a story to tell. By learning how to recognise a few tell-tale traits, you can start to identify from which era the items originates.

In this post, we’ll look a few identifying factors of Victorian jewellery.

When was Victorian jewellery made? 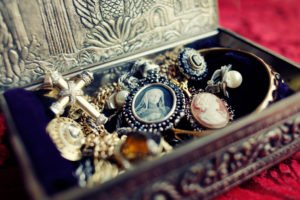 The Victorian era is named after Queen Victorian, who ruled over the United Kingdom from 1837 to 1901 and her reign – in terms of jewellery – can be divided into three periods: The Romantic, Grand and Late Victorian or Aesthetic periods. 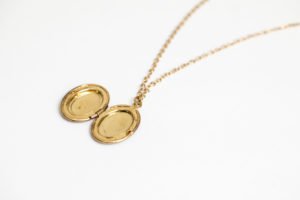 The early Victorian period coincided with the young Queen Victoria’s courtship and early years of marriage with Albert. Stylistically, the jewellery of this period featured symbols of love and high romance; floral and foliate motifs abounded, as did jewels featuring serpents which were represented wisdom and eternal love.

Brooches were extremely popular as the high necklines and bonnets that were popular during this era made necklaces and earrings impractical.

The passing of Prince Albert signalled the end of the Romantic period – which happened to coincide with the American Civil War. Death was reflected in the jewels of this period, with the popularisation of what would come to known as remembrance jewellery.

Despite the solemnity, there were sparks of light. In 1867, high quality diamonds were discovered in South Africa creating a popular demand for this previously impossibly rare gem.

Easily the most recognisable styles during this era was the ‘gypsy’ diamond solitaire, where the diamonds was imbedded into a band with small claws holding the stone in place.

Although Queen Victoria remained in mourning for Prince Albert until her death in 1901, her subjects were ready to move on sooner.

During this era, the world – and particularly the UK – welcomed the marvels electricity and the industrial revolution. There emerged a middle-class who had more free time, and perhaps more importantly, more money.

Styles varied widely, and the jewellery of this period was made lighter to accommodate people’s active lifestyles. Popular motifs of this time included animal heads, bows and knots. Interestingly, this was also the period that saw Tiffany & Co. designed their solitaire engagement ring – a style that remains popular today!

If you do have any questions about our pieces – or indeed anything you may have in your own jewellery collection – please feel free to  contact our team of experts today. We’d love to help!