Historians have talked about necklaces that date back to as far as the bronze age, where prehistoric people used natural materials such as feathers, bones, shells, and plant materials to make them. Ancient civilisations that are known to have worn necklaces include Mesopotamia, Babylon, Sumer, Egypt, Crete, Greece, and Rome, amongst others.

In more recent history, necklaces have undergone significant changes along with the technological and cultural shifts that gave way to them. In this article, we’ll discuss the Georgian, Victorian, and Edwardian periods, focusing on what characterises the necklaces from these times.

The Georgian period covers the reigns of five English kings, four of whom were named George and one William. But although the name of this period comes from the King of England, England wasn’t the only influence on art and culture of that time. The jewellery of this time was also influenced by France, Germany, and Italy.

Predating the industrial revolution, Georgian necklaces were handmade. Ornate metalwork of this time, such as repousse and cannetille, was labour intensive. Since jewellers didn’t start marking their jewellery until the 1900s, another characteristic of a Georgian necklace is that it bears no maker’s mark or stamp. To enhance these necklaces, gemstones were often set in closed back settings.

Glass overlays and enamelling are other markers of the Georgian necklace, along with the flower, crescent, ribbons, bows, leaves, feather plumes, and foliage motifs.

This Georgian 1.3-carat old cut diamond pendant is dated to circa 1810.  The top half is comprised of twelve old mine cut and rose cut diamonds featuring two sweeping foliage motifs that make it instantly recognisable as Georgian. 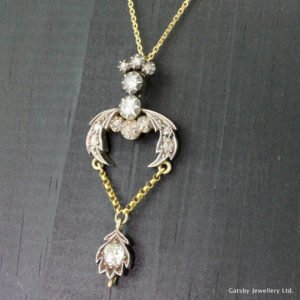 The Victorian era began and ended with Queen Victoria’s reign – a period which saw big changes in society, fashion, and jewellery. It can be divided into three distinct time zones – the early Victorian or Romantic, the Middle Victorian or Grand, and the Late Victorian or Aesthetic periods.

With the Industrial Revolution underway, Victorian jewellery was no longer strictly manufactured by hand. Victorian necklace designs were influenced by a renewed interest in gothic and medieval times and many necklaces of this period were slide chains.

The Edwardian period was named after English monarch King Edward VII. This was a period characterised by luxury and frivolity. It was also significantly marked by consumers rejecting the idea of mass-produced jewellery following the industrial period.

Another determiner of jewellery design for this period was the invention of the 1903 oxyacetylene torch, which for the first time meant that temperatures could be achieved to work with platinum.

Art Nouveau and the arts and crafts movement came to the forefront of popular jewellery and is today known as a style which characterises much of this period. Another influence on Edwardian Necklace designs were principles adopted from Japanese designers, by using simple, elegant and beautiful interpretations of nature across fashion.

Platinum which is a strong but light metal was made into laurel wreaths, knots, bows and ribbons and, throughout the period, bows and dog collars became very popular.

This Edwardian saltwater pearl pendant displays the natural influences that helped create the elegance that Edwardian necklaces are known for. 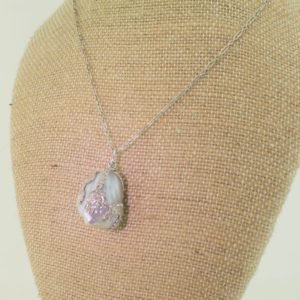