Throughout history, gems and precious stones have often been associated with certain emotions or said to bring luck to those who wear them. Gemstones have been used in prayer, medicinal practices, and casual wear across the millennia, and many of the notions associated with them come from their individual histories.

Certain gemstones are often associated with love. This can be love of any kind: familial, romantic, platonic or self-love. These stones can be a wonderful gift to give to the loved ones in your life due to their sentimental associations.

Amber has often been considered a good charm for love and marriage. However, amber itself isn’t technically a gemstone, but rather the hardened resin of ancient pine trees. It is widely classified as a gemstone and is used in jewellery in this way, recognisable by its rich, deep yellow tones.

Amber is the tenth-anniversary gem and is a symbol of continual and renewed faith in marriage. The stone itself is said to be both calming and energising and can bring balance to those who wear or carry it.

Another gemstone often associated with love is January’s birthstone, garnet, which might make it the perfect gift for a loved one born in this month.

Garnet has always been considered a lucky stone for love throughout history, likely because of its red, romantic hue. This is displayed well in this Art Deco diamond and garnet ring, which sets the garnets against bright gold, enhancing the rose-red colour. 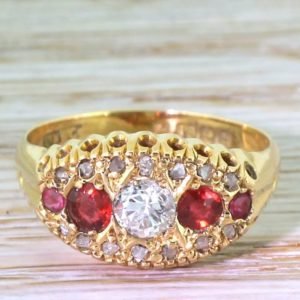 In ancient and medieval times, garnet was often used in medicinal practices relating to the heart, such as inflammatory diseases. Doctors in this era thought that wearing garnet – or occasionally consuming, in a fine powder form – would soothe an ‘angry’ heart.

This stunning, vibrant blue gemstone has been considered lucky for love since ancient times.

Folklore says that if you give lapis lazuli as a gift, you are forging an eternal bond of friendship, loyalty and trust. Lapis lazuli’s lively blue colour and ultra-durability make it a great choice for men’s jewellery especially. These mid-century cufflinks display lapis in all its glory.

Legends involving this gemstone are among some of the oldest in the world. The Sumerian goddess of love, Inanna, was said to have entered the underworld wearing a pendant made from lapis lazuli, which guided her through the experience.

In English and French royal courts, patrons often used elaborate gem language to convey discreet messages. People would set bracelets and brooches with a variety of different gemstones, the first letters of which would convey a motto or sentiment. Lapis lazuli (L) would often denote love or luck, depending on the usage – and probably who was asking!

A common wedding gift throughout history, especially in India, moonstone has always been closely linked to love and romance.

Moonstones are named as such due to their iridescent appearance, which symbolises   the brightness of the moon itself. In this moonstone and diamond trilogy ring, the links to the physical appearance of the moon are clear. 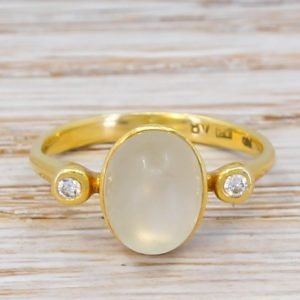 Indian and European folklore purported that two people wearing moonstones on the night of a full moon would fall passionately in love. Moonstone is so closely linked to the notions of love due to the moon’s feminine, romantic associations. The moon’s rejuvenation cycle represents renewed love, and the physical pull between the earth and moon by gravity reflects the emotional pull of romance.

It has been said since medieval times that those seeking true love should follow these instructions: hold the gem in your hands during a full moon, envision your love coming to you, and carry the gemstone with you, at all times, until the next full moon.

Traditionally, lovers would exchange gifts made with moonstone, especially after quarrelling, to restore love and tranquillity to their relationship and renew their passion.

Perhaps the most infamous of all love stones is rose quartz, which is widely regarded as the stone of unconditional love. Rose quartz comes in different shades of pink and is said to stave off negativity.

The usage and connotations of rose quartz have roots in ancient Greek and Roman mythology, with their respective goddesses of love, Aphrodite and Venus, often depicted wearing the stone.

In Greek mythology, rose quartz was created when Aphrodite became injured whilst protecting her fallen lover, Adonis, and their blood combined to colour some white quartz pink. This cemented rose quartz as a symbol of unconditional love brought into the mortal world.

Rose quartz has been used in romantic ceremonies and rituals for thousands of years and is thought not only to strengthen the bond between two people, but also the ability to love oneself.

⟵ What Is A Ballerina Ring?
Back to the blog
What Is Jade? ⟶