Home / Blog / What is Lapis Lazuli and How is it Used in Jewellery?

Lapis lazuli is a semi-precious gemstone, prized for its intense blue colour and gold flecks. It is most commonly known for being used in Tutankhamun’s death mask, as well as many of the amulets and scarabs found in his tomb.

It’s believed that lapis lazuli was first mined in Afghanistan around 6000 years ago and has been found in archaeological remains in Neolithic burial sites around the world. In the middle ages, lapis was exported to Europe where it was ground into powder and made into ultramarine, a pigment used by of the most important artists of the Renaissance and Baroque period – but sparingly, as it was incredibly expensive.

Because of its high water content, lapis can dry out over the years, meaning it can eventually become brittle and break down into mineral powder. Therefore, pieces over 1000 years old are rare and mostly found in museums or private collections.

Lapis lazuli has been imbued with meaning and significance in every culture it was used by. In Ancient Egypt, it was among the most highly prized materials, which is why it was so prevalent in Tutankhamun’s tomb. The deep blue colour of lapis was a sharp contrast with the desert hues of Egypt, and the gold flecks in the stone were seen as being like the stars in the sky.

The Egyptians weren’t the only ones who made a connection between lapis and the sky– it was supposedly representative of clear, starry nights in both Ancient Persia and Medieval Europe. In Buddhism, lapis is believed to provide a sense of inner peace and respite from negativity.

Jewellers have used lapis lazuli in different ways in order to display off its vivid colour. The necklace below, part of the collection at The Met in New York City, is an Ancient Egyptian broad collar dated between 332-246 BC and features turquoise, lapis lazuli and carnelian set in gold. 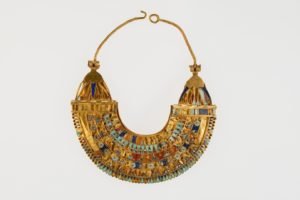 Lapis lazuli has been used in more practical items too, to elevate them and give these everyday items an element of luxury. For example, this holy water stoup is a highly prized devotional object, made from lapis lazuli and gold. 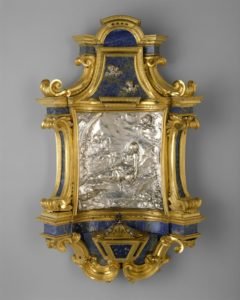 Inlay describes a technique where one decorative material is embedded into another, flush with its surface, to create a beautiful ornamental effect. Often, contrasting materials are chosen for inlays, so lapis lazuli and gold are commonly used together in jewellery with inlaid elements. These mid-
century lapis lazuli and diamond cufflinks show how striking this contrast can be. 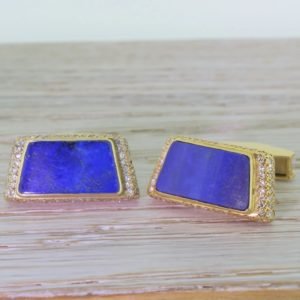 A cabochon is a gem that has been polished into a shaped convex dome with a flat reverse. Lapis lazuli can also easily be formed into beads and threaded to create a bracelet or necklace.

⟵ How Ancient Jewellery Influences Modern Jewellery Design
Back to the blog
The Significance of Birthstones: Opal and October ⟶