Jewellery Around The World: Egyptian Jewellery

In our piece exploring how ancient jewellery influenced modern pieces, we discussed how Ancient Egyptian jewellery shaped western creations. Jewellery has been around for hundreds of thousands of years, since the first simple pieces made from bones and seashells, through to the more ornate modern pieces we see today.

Egypt in this sense was ahead of the curve, using precious stones and metals to create extravagant jewellery that could indicate higher status to all of society. When discussing Egyptian jewellery, it is necessary to focus on Ancient Egypt especially – the jewellery styles invented then are still worn today, both in Egypt and throughout the rest of the world.

Ancient Egypt and the rise of jewellery

Egyptians valued personal adornment highly, and jewellery was worn by men and women from all classes. Whilst clothes were plain, jewellery was designed to be ornate and ostentatious. Ancient Egypt was an advanced society overall, and they used this technical prowess to create jewellery that was ahead of its time.

Additionally, Egypt itself was rich in natural materials like gold and copper, and gemstones were easily found. So, glamorous resources were at their fingertips to use in their creations. The definitive moment that marked the dawn of Egyptian jewellery as we know it was the discovery of gold. This allowed Egyptian jewellers to collect vast quantities of the perfect material to create their designs.

High-grade Egyptian jewellery was highly sought after across Greece, Rome, Turkey and ancient Persia. Jewellery and embellishment weren’t just saved for the living – Egyptians sent their deceased loved ones into the afterlife adorned with the finest pieces, and their statues of gods and kings were decorated with lavish jewels.

Golden jewellery in particular was a status symbol. It implied the wearer had wealth and power amongst society. It was also used in many religious senses and was associated with the worship of the gods.

Jewellery also held a supernatural significance – it was said to ward off evil spirits and bring good luck, as well as instilling energy within the wearer. Symbolism was so important to Egyptian jewellers that they had very strict rules regarding the mythical aspects of their creations.

As already mentioned, gold was one of the most popular materials used by Egyptian jewellery designers. The masses, however, tended to wear copper – but both materials were widely available to mine int the Nubian desert. While silver has been occasionally found by archaeologists, it was not commonly worn as it does not occur naturally in Egypt.

For gems, the most prized stones included lapis lazuli, obsidian, garnet, and carnelian. Pearls and emeralds were also commonly used as they were native stones. Jewellers also used faience, which was a stone made of ground quartz mixed with colourant; the most popular form of faience was a blue-green stone crafted to look like turquoise.

Whilst there was a wide range of different items, there are some iconic pieces of jewellery that were a staple to any Egyptian collection. These pieces are still inspiring to jewellery makers today and have been ever since they were popular in Ancient Egypt.

These were large necklaces that generally sat across the chest of the wearer, made up of rows of beads and gems. They sometimes bore charms or amulets and were designed to be the centrepiece of any outfit worn. This style has remained popular through the decades, albeit in a simplified way, as seen in this mid-century citrine necklace. 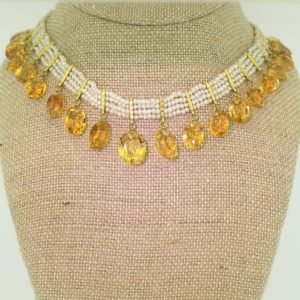 These were popular jewellery items for the deceased, especially heart-shaped versions. They were often oval or beetle shaped amulets, but to accompany the dead into the afterlife they usually took the form of a heart. This was supposed to counteract the heart’s separation from the body.

These were more simplistic, everyday jewellery pieces. These often feature charms and were made from beads and gems of varying sizes. A more modern example is this emerald beaded necklace, which features two strings of emeralds adorned with gold. 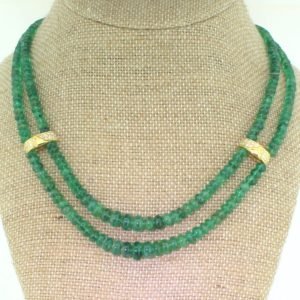 Often featured in Egyptian jewellery collections were protective amulets. These could either be worn alone or alongside other jewellery. Their specific purpose was to protect the wearer from any harm.

They were typically made from clay or gems, carved into shapes like animals and gods. They were seen as significant protectors of the living and the dead, and like most other jewellery, were owned by citizens of every class.

⟵ The History Of Antique Lover’s Eye Jewellery
Back to the blog
Spotlight On: Raymond Templier ⟶