Period or antique jewellery always tells a story, providing insight into the social and economic climate of a certain period in history.  We’re here to explore the significance of ancient jewellery and how its design impacted more modern jewellery trends, looking specifically at the contributions from Ancient Rome, Greece and Egypt.

The discovery or popularisation of new materials such as glass, bronze, gold, lapis lazuli, and coral has heavily influenced the designs in ancient jewellery. 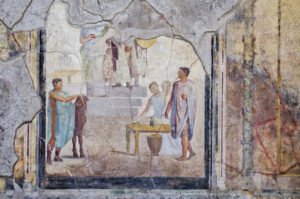 We know that jewellery was worn by middle- and upper-class Roman men and women, evidenced by archaeological digs across modern-day Europe and beyond. As well as discovery through excavated material, jewellery is also discussed in inscriptions and presented in statues and mosaics.

The Ancient Romans wore precious stones like opals, emeralds, diamonds, topaz, and pearls set as earrings, bracelets, rings, brooches, necklaces and diadems. Anklets were also sported – though not by respectable matrons. The Romans prized pearls highly, and hoped Britain would be a good supplier.

Pliny, the famed author and lawyer from Ancient Rome said:

Women glory in hanging pearls on their fingers and using two or more for a single ear-ring… as if they enjoyed the sound and mere rattling together of the pearls; nowadays even more people covet them – it is a common saying that a pearl is as good as a lackey for a lady when she walks abroad…

In Roman times, women had very limited rights, but jewellery was their own property that was kept independently of their husband’s wealth.

Roman necklaces were usually made of beads or chains and could contain a pendant, charm or amulet to guard against evil. Both men and women commonly wore a torc – a large neck-ring made from a single piece of metal or from several metal strands twisted together. As they were often made from precious metals, they would have indicated high status, and it’s thought that they were given as diplomatic gifts.

Roman earrings were often made from gold and employed filigree techniques, like jewellery from the art deco era, with twists and granules as decoration. These earrings were embellished with semi-precious stones like lapis lazuli, pearl, amber, or carnelian.

Roman rings were often worn by children as well as adults, as they were seen to ward off bad luck. Popular designs included signet rings, intaglio rings, cameo rings, and marriage fede rings.

Intaglio rings featured a carved gemstone that featured a recessed image. They were used for finishing wax seals, and prominent men in the Roman Empire would have had their own intaglios carved in carnelian, jade, or garnet as a marker of status. Intaglios underwent a renaissance in the 18th century, as collecting them reflected an educated state of mind due to their history. They were made using the same techniques that were used in the Roman Empire. 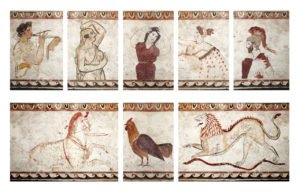 Greece is often considered the cradle of civilisation. Ancient Greece was split into three periods: the Archaic Period, the Classical Period, and the Hellenistic Period.

Throughout all of these, earrings, pendants, pins, bracelets, armbands, wreaths, and diadems were popular, often referencing Greek gods and goddesses. Even before metallurgy arrived in Greece, artisans were making jewellery from stone, clay, and bone. The most notable Greek jewellery was made of gold and decorated with precious stones and pearls imported from Egypt, the Near East and India. Jewellery was considered variously as a symbol of social status, a ward against evil and a celebration of the Gods.

Greek jewellery made heavy use of motifs, often incorporating images of rams, bulls, and Gods. Butterflies were also a common motif, often representing the soul in burial jewellery.

The Hellenistic Greeks were the first to excel at carving cameos or small stones with images carved or sculpted in relief. In the 5th century BC, the Greeks started engraving stones in projected relief, meaning the image was raised rather than sunken into the carving material. This was a big step forward, allowing images to become sharper and easier to view.

Cameos remained popular throughout history, particularly in Victorian times where they were often gifted as mementoes in the absence of photographs.

The Ancient Egyptian period began 5000 years ago, spanning the period of early pre-history up to Roman rule. But when we think of Ancient Egypt, we generally reference the Dynastic Period; the age of pyramids, mummies and hieroglyphics.

Well preserved burial tombs discovered in the 1920s in the Valley of the Kings have ensured that we know a lot about Ancient Egyptian jewellery. Materials such as gold, lapis lazuli, emerald, carnelian, turquoise and obsidian found in Egyptian artefacts influenced western art and design during the Art Deco period, sparking a what has become known as the Egyptian Revival.

What jewellery was worn in Ancient Egypt?

Jewellery in Ancient Egyptian times was worn for adornment, protection or legal authentication. When it was found, King Tutankhamun’s mummy had 11 collar pieces and 20 amulets in its wrappings.

Each man would wear a signet ring with his family emblem – usually an animal like a hawk, lion or scorpion that symbolised strength. These rings were unique, and if a man was killed in battle, the victor would claim the jewellery of the defeated.

It’s also thought that most Egyptians wore collar pieces which would have rested on their shoulders, displaying wealth and status. Some of these collar pieces were so heavy that they required a counterweight that hung down the wearer’s back.

The scarab was a particular motif that carried religious significance to Egyptians as it symbolised rebirth. It was essential that scarabs adorned the deceased to ensure their reincarnation. The owner’s name was inscribed into the stone in hieroglyphics.

Armbands were also worn around the upper arm and bracelets or bangles were worn on the forearm or around the wrist.

⟵ Spotlight on: Rene and Jeanne Boivin
Back to the blog
What is Lapis Lazuli and How is it Used in Jewellery? ⟶