Rene Boivin is a well-known French jewellery house founded in 1890 by Jules Rene Boivin and made famous after his death by his wife, Jeanne Boivin. Born in Paris, Rene became a goldsmith’s apprentice aged 17 where he learned inlaid metalwork and became an accomplished draughtsman and engraver.

In 1893, he married Jeanne Poiret and began to work as a manufacturer for prominent jewellery houses. He quickly built a base of private clients, fulfilling bespoke jewellery orders and demonstrating natural skill in design.

Seven years later, he moved his operation into a larger premises with an elegant showroom to receive private clients. Here, Boivin gained a reputation for stunning diamond jewellery inspired by the natural world. When he died in 1917, Jeanne stepped forward and turned her husband’s legacy into something very special.

In 1921, Jeanne employed Suzanne Belperron who’s designs contributed to the ethos of the firm. Jeanne said of Suzanne: ‘Her creative energy is indispensable to us, and she plays a major role in the artistic life of the Maison’

Suzanne left in 1932 to set up her own jewellery house, but after her departure the house of René Boivin continued to grow. The stunning, naturalistic designs attracted a huge catalogue of distinguished clients who loved the distinctive jewellery. Jeanne, her daughter Germaine, and her employee Juliette Moutard worked closely together to boost the business and create exciting jewellery.

When Jeanne died in 1959, she left the company to Germaine, who ran it until 1976. Before she retired, she sold it to Jacques Bernard, who had worked for Boivin for years as the technical director. The firm ceased trading in 1991 and the jewellery has been highly valued on the antique market ever since.

Jeanne and Rene Boivin jewellery designs were inspired primarily by the bright colours of the natural world. The house often favoured colourful gemstones, set into yellow gold in the form of leaves, flowers, trees and starfish. Over everything else, they were famous for their brooches. Boivin brooches are true statement pieces: large and attention-seeking, but stunningly crafted.

Iconic Boivin pieces include a jewel-encrusted gold replica of a dog, a five-limbed starfish set with emeralds, and a large number of colourful floral-inspired brooches.

Boivin designs were unique at the time, but they had a strong influence on jewellery design for decades to come. 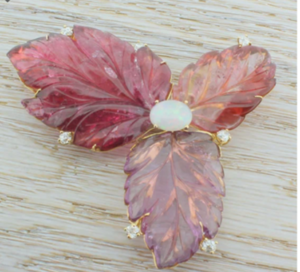 This Art Deco Tourmaline, Opal and Diamond Foliate Brooch is a stunning piece of design that draws parallels to Boivin jewellery in its nature-derived form. It’s hand-carved from 125 carats of tourmaline and held together from behind by intricate yellow gold veins that show through the front of the stone.

⟵ The Significance of Birthstones: Opal and October
Back to the blog
How Ancient Jewellery Influences Modern Jewellery Design ⟶