‘My style is my signature’

By 1928, Suzanne Belperron’s style was becoming popular. Employed by Maison Boivin, she was the firm’s only designer and, along with Jeanne Boivin, her co-director, she transformed the company’s aesthetic. In 1932, however, Suzanne began working for Bernard Herz, a premier stone and natural pearl dealer, who allowed her complete creative freedom. She famously decided that her jewellery would not be signed, stating, ‘My style is my signature’.

The next decade would be tumultuous not just for Belperron – but for society as a whole, as Europe was plunged into war. In 1941, at Bernard Herz’s insistence, Suzanne purchased B. Herz and renamed the company to preserve it during the Nazi occupation of Paris.

This allowed his assets to be protected throughout the war, and although Herz was arrested and subsequently killed by the Nazis at Auschwitz, this simple act of resistance ensured that his family were left with a legacy after the war was over. Jean Herz, Bernard’s son, returned to Paris in 1945 to become an equal partner in the company, now renamed Jean Herz-Suzanne Belperron.

Over the ensuing decades, Belperron’s jewellery was worn by some of the most stylish women in the world. Elsa Schiaparelli, Diana Vreeland and the Duchess of Windsor were seen sporting Belperron designs. In 1963, Belperron was awarded the rank of Knight of the Legion of Honour. At the time, a writer in the Chicago Daily Tribune said, “What Chanel and Schiaparelli are in the French fashion world… Belperron is in the predominantly male fraternity of Paris jewellers.” Eleven years later, Herz and Belperron retired the business.

It’s estimated that Belperron made between 3,000 and 5,000 pieces in her lifetime, though the exact number is unclear because, of course, the pieces were unsigned. After her death, there were an additional 5,000 drawings of pieces that were never made. She’s famous for architectural rings and diamond-encrusted necklaces and bangles.

Although Belperron’s designs are distinctly modern, it’s easy to see how her style was influenced by antique jewellery. These earrings, stocked at Gatsby, evoke her distinct style, particularly in their use of colour and shape: 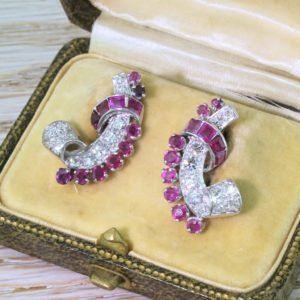 Suzanne Belperron was the only female jewellery designer that was regarded as a master of the art while she was still alive. And it’s little wonder, given her scant regard for conventions and the limits – in this sense, she was a true creative.

Featured on the covers of Vogue and Harper’s Bazaar, Belperron’s jewellery designs were ground-breaking in form, volume and material. And although Belperron isn’t a household name like Van Cleefs, Cartier or Tiffany, her work is so much more than diamond jewellery – it’s art.