Home / Blog / The Significance of Birthstones: Opal and October

October’s birthstones are tourmaline and opal. Tourmaline, the primary birthstone, is rare as it is one of few birthstones that can be found in any colour. Some pink tourmalines have clarity as transparent as diamonds. Opals on the other hand are in a class of their own.

Opal, one of the birthstones for October, is a beautifully iridescent gemstone which has been highly prized for thousands of years – even from before the Ancient Greek and Roman times. There are two main varieties of opal: precious and common. Precious opals can take on many colours, with internal refraction of light causing the phenomenon called ‘play of colour,’ meaning that no two are the same. Common opals don’t display play of colour but instead come in a variety of hues such as pink, green, blue and yellow.

Opals were particularly popular in the 1950s and 60s, so plenty of vintage opal jewellery from the mid-century period exists.

Unlike most other gemstones, opal does not have a crystalline structure. The stones contain 5-20% water which may cause them to become brittle over the years so they are not usually considered suitable for everyday wear, which is why it’s unusual to see them in engagement rings. Opals often found in fossilised shell, wood and bone. More than 90% of the world’s supply come from Australia, although Mexico, Brazil, Indonesia, the Czech Republic and Ethiopia also produce stones.

The many different colours in opals come from tightly packed spheres of silica, and the way that they
are arranged inside the stone. The more vibrant the colours within the opal, the more valuable it tends to be. All opals vary in the colour of their fire, with one of the rarest opals being the prized Harlequin Opal – displaying a chequerboard pattern.

Opals were believed by the Ancient Greeks to have the power of prophecy and foresight. In fact, the word ‘opal’ comes from the Greek opallios which means ‘to see a change in colour’. For the Romans, opals represented purity and hope. They were held in high esteem throughout history right up until the 19th century.

In 1829, Sir Walter Scott’s book, Anne of Geierstein, transformed the perception of opals. The story is about an enchanted princess who wore an opal that changed colour depending on her mood. After holy water extinguished the stone’s natural fire, the princess died. After this, people began to associate opals with bad luck and within a year of the book’s publication, opal sales in Europe plummeted.

Despite this, opals were still seen on the jewels of the British monarchy. They were one of Prince Albert’s favourite gems, presenting Queen Victoria the Oriental Circlet Tiara, featuring 11 precious opals (although these were later swapped for rubies).

What do opals signify?

Opals are thought to stimulate creativity and are representative of justice and harmony. They are known to be associated with love and passion, as well as desire and eroticism. Wearing an opal is said to bring about loyalty and faithfulness. 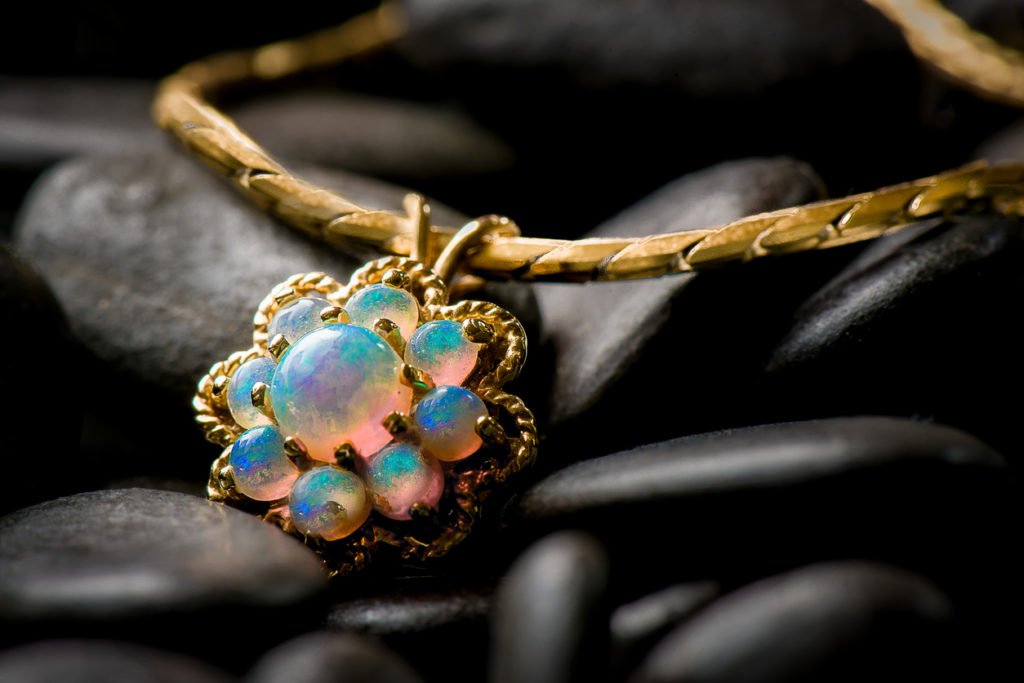 When buying opal jewellery, you should look for colour and pattern. Warm colours like red and orange are rarer than blue and green. Gemmologists tend to prefer large, concentrated patches of colour over small specks. Look out for stained glass opals, peacock opals, rolling fire opals, Chinese writing opals and harlequin opals.

Crystal opals should be transparent, whilst in black opals, opacity is more valuable. Fine opals should be cut into irregular shapes to emphasise colour but most are cut into a cabochon with a rounded dome. Some come in thin layers, mounted on a dark stone and finished with a thin layer of glass as
protection.

Opal rings, such as this stunning 8.67-carat black opal solitaire ring, make for great gifts for special occasions, especially if you’re buying for someone born in October. 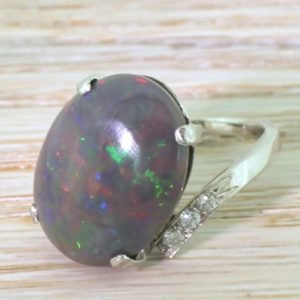 ⟵ Spotlight on Suzanne Belperron
Back to the blog
Spotlight on: Rene and Jeanne Boivin ⟶