The Significant Of Birthstones: September & Sapphire

The September birthstone is sapphire – a gem that has been cherished by cultures the world over for millennia. The word “sapphire” is now synonymous with a vibrant blue colour, which makes perfect sense, as sapphire is the Greek word for blue. The blue sapphire has signified many virtuous traits since ancient times, such as honesty, purity, and loyalty. In keeping with this tradition, sapphires are one of the world’s most popular engagement gemstones.

While the term sapphire typically refers to the blue variety of corundum (ruby is the red variety), the stunning September birthstone comes in a range of rich, vibrant hues, from shimmering yellow sapphires to deep, earthy shades of brown and green.

Sapphire has adorned royalty and the robes of clergymen for centuries. The elite of Ancient Greece and Rome believed that blue sapphires protected their owners from harm and envy. In the Middle Ages, clerics wore sapphires as they regarded them to be symbolic of Heaven. The ancient Persians believed the earth rested on a giant sapphire, which gave the sky its blue hue. In Medieval Europe, the September birthstone was thought to have healing powers and the capacity to cure plague boils and eye diseases, as well as providing an antidote to poison.

The former is an opulent 62.02 carat rectangular step-cut stone unearthed in Myanmar (Burma) and was acquired by the financier and philanthropist John D. Rockefeller Jnr in 1934, from an Indian maharaja. Initially set as a brooch, the gem was recut and remounted over the years, before being made into a ring flanked by two striking triangular diamonds.

Perhaps the most famous sapphire, however, is a 12-carat Ceylon sapphire engagement ring that belonged to Princess Diana. Consisting of fourteen diamonds surrounding an oval blue Ceylon sapphire set in 18-carat white gold, the ring is now worn by The Duchess of Cambridge, Kate Middleton after Prince William asked for her hand in marriage in 2010.

Where is sapphire made?

Kashmir, Myanmar (formerly Burma), and Sri Lanka are three key sapphire sources. Large quantities of sapphire have also been unearthed in Australia, Thailand, Cambodia, Madagascar, and the United States, along with other countries in Africa and Asia.

Sapphire was discovered in Kashmir around 1881 due to a Himalayan landslide that exposed a large pocket of the September birthstone. As the sapphires appeared further south, the Maharaja of Kashmir’s army seized the locality. Between 1882 – 1887, his army unearthed thousands of sapphires – the stones the crystals’ produced cementing Kashmir’s reputation as a coveted sapphire source.

Myanmar’ jungle-clad Mogok area is another famed locale for sapphire production. Here, sapphire usually occurs alongside ruby, but in much smaller quantities. Colloquially known as ‘Burmese’ sapphire, Myanmar’s sapphires possess a notably rich hue of blue, which makes it all the more coveted.

The “jewel box of the Indian Ocean” has produced stunning sapphire gemstones for over 2,000 years. The island’s milky white ‘geuda’ sapphires can be heat treated to attain a radiant blue hue.

How to clean sapphire jewellery

The September birthstone is relatively hard, scoring a nine on the Mohs scale. It is, therefore, extremely tough and has no cleavage (tendency to break when struck), making it an ideal choice for daily wear.

Keep your precious September birthstone clean using warm, soapy water. Steam and ultrasonic cleaners are generally safe for both untreated and heat-treated birthstones, so these are also options. If your sapphire is dyed or fracture-filled, however, opt for a damp cloth to carefully remove any debris.

This natural sapphire brooch features an unheated gemstone from Ceylon and shines brightly in Aegean blue. Primarily a brooch, a concealed bale allows this to be worn as a pendant if you prefer. 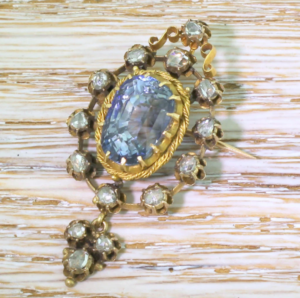 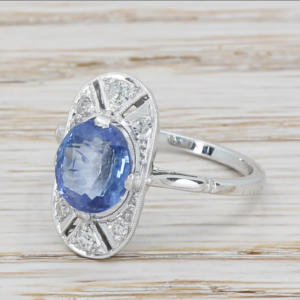 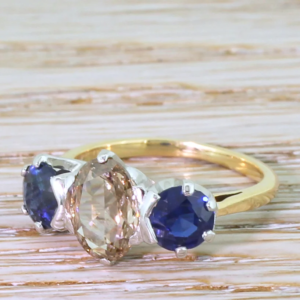 ⟵ The Significance Of Birthstones: August And Peridot
Back to the blog
Spotlight on Suzanne Belperron ⟶