Home / Blog / The Significance of Birthstones: July and Ruby

July’s birthstone is ruby, a gem representing love, passion, courage, and emotion. It’s one of the most popular coloured gemstones and is used in all varieties of jewellery, from birthstone jewellery to engagement rings.

Rubies are always red; from pinkish red to traffic light red. The finest colour, however, is known as ‘pigeon’s blood’ – deep red with a hint of purple. Ruby gets its colouring from trace amounts of the element chromium; the more chromium, the stronger its red will be.

Formed from corundum, the same mineral that makes up sapphires, rubies are an especially hard gemstone, registering 9 on the Mohs scale of hardness, just one point below diamond.

The name ‘ruby’ is derived from the Latin ‘ruber,’ meaning ‘red’. Desirable due its striking colour and rarity, rubies have been worn in by royalty and nobility across the world and throughout the ages.

In ancient India, ruby was called the ‘king of precious stones’ because of its rarity, hardness and beauty: it was a symbol of power and youth in Indian culture. Medieval Europeans believed rubies brought health, wisdom and success, even thinking that it could predict danger or misfortune.

Like many gemstones, most rubies are mined from stream sediment rather than from inside hard rocks, allowing for excavation of the stone without damaging it. Because rubies are so hard, registering as a 9 on the Mohs scale, they are generally highly resistant to weathering and so can be found in good condition.

Whether or not your ruby is treated will determine how you should care for it. However, all rubies can be cleaned with warm soapy water and a soft toothbrush. If your ruby is untreated, ultrasonic cleaning is safe, but it’s recommended that this process is carried out by a professional.

Rubies have been used consistently in jewellery spanning back all the way to ancient history. Although one of the rarer gemstones, there are plenty of antique jewellery pieces that feature rubies, especially from the Victorian era onwards. 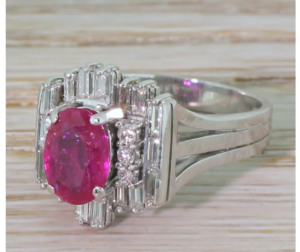 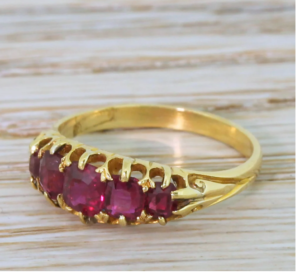 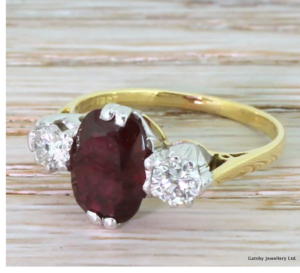