Home / Blog / The Significance of Birthstones: November & Topaz or Citrine

People born in November are lucky enough to have two birthstones to choose from: topaz or citrine. Topaz comes in numerous hues: colourless, blue, red, yellow or orange, whereas citrine is only ever orange.

With a hardness of 8 on the MOHS scale, topaz is hardly enough to be worn everyday. Citrine, with a MOHS rating of 7, is suitable for use in jewellery, but can potentially degrading over time. 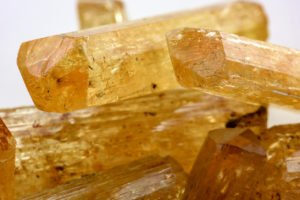 When topaz is mined, it is usually brownish and has to be irradiated to bring out it’s more existing and intense colours. This is a widely accepted method of topaz treatment and produces beautiful but relatively inexpensive gemstones.

In Ancient Egypt, topaz was thought to be a representation of the god, Sun Ra, because of the intense fiery colour of the topaz that was found in the region at the time. Because of this, topaz is found in many important ancient artefacts in North Africa and the Mediterranean.

Imperial Topaz was so named because, originally, only Russian royals could own it. Pink
topaz is found in North Pakistan and has been mined there since 1972. The most sought-after colour is the extremely rare cyclamen pink.

Topaz has taken on a range of meanings throughout history, aside from being a November birthstone. The name topaz derives from the Greek word topazion, which it’s thought originated from the Sanskrit word tapas, meaning fire.

In Hinduism, topaz is sacred and makes up one of 9 sacred stones that encrust the Navaratna talisman. It has a range of modern western meanings too, including being the traditional stone for both 4th and 19th wedding anniversaries.

Topaz is used frequently in jewellery, often, because of its durability, as the main stone in rings. Because of the range of colours topaz is available in, it can sit comfortably next to any number of other gemstones or materials.

The pink topaz in this Georgian ring plays nicely with 26 rose cut diamonds, creating a soft feminine appearance that is elegant and mystical. 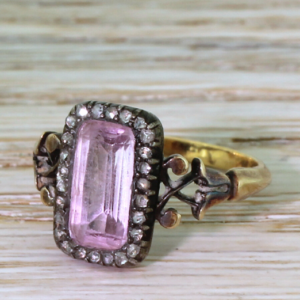 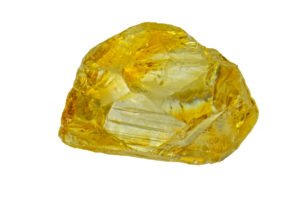 Most citrine is the result of heat-treating amethyst. It is mined across the globe – Bolivia, Spain, Madagascar, Mexico, Uruguay and Brazil – making it one of the more affordable gemstones.

The colour of Citrine ranges from transparent yellow to brownish orange and has been used in jewellery for thousands of years. In the ancient times, it is possible that citrine was confused with topaz due to the lack of understanding surrounding the gem’s mineral makeup. By the Victorian times, it was particularly popular in jewellery such as parures – jewellery sets that included
necklaces, earrings and brooches.

Throughout the ages, citrine seems largely to have been used as a decorative gemstone. Its name comes from the Greek word citron, aligning with its appearance which is reminiscent of citrus fruit.

It is the traditional gemstone gift for 13th and 17th wedding anniversaries and is the planetary stone for Virgos.

Yellow gemstones aren’t abundant, and with topaz commanding a fairly high premium, citrine is one of the few affordable yellow gemstones. This makes it very popular in jewellery, and it’s particularly prevalent in necklaces and pendants.

This drop necklace circa 1900 combines both citrine and topaz on a 14k yellow gold chain, perfect for a birthday gift for any jewellery enthusiast born in November. 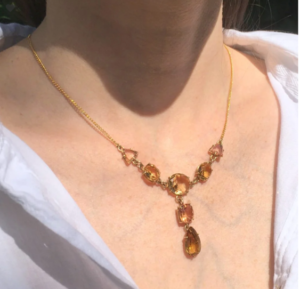 ⟵ What is Lapis Lazuli and How is it Used in Jewellery?
Back to the blog
Toi et Moi Rings: Unusual Engagement Rings ⟶