Symbolism And Meaning In Victorian Jewellery

Symbolic jewellery can hold great significance for the wearer, because of the symbol itself and how its relation to their personality, or because of the person that gave them the item.

There was a wide variety of popular symbols, including flower and nature imagery.

The crescent moon was an immensely popular symbol for Victorian jewellery lovers. It was a feminine symbol, celebrating the moon as a goddess and, by extension, embracing female empowerment.

The crescent moon in jewellery also represented change due to the cycle and phases of the moon, as well as spirituality.

Crescent moons were often featured or worn with stars, indicating direction and guidance for the spirit. This beautiful brooch, circa 1880, shows the usage of stars in glamorous jewellery. 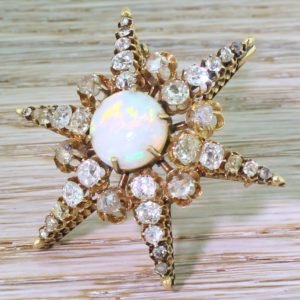 The heart has been used in jewellery for probably thousands of years, and it was prevalent during Victorian times. The heart shape has been recognised as a symbol of love throughout history and across many different cultures, so it made sense to translate this symbol into pieces of jewellery.

Heart jewellery represents love, charity and compassion. A combination of two hearts linked together would indicate eternal love, and a crown sitting atop the heart suggests the wearer is the ruler of someone’s heart.

Claddagh and gimmel rings depict hearts, both of which were popular in this era – Queen Victoria herself wore a Claddagh ring. These rings also depict hands, which were another common symbol in the Victorian era.

Hands have represented a symbol of strength, loyalty and fidelity since Ancient Roman times. In the Georgian and Victorian eras, they were added to jewellery pieces to convey these messages. Often shown in delicate poses, such as holding a flower or clasped together, hands represent friendship in Victorian jewellery.

Hands were also used to create a unique clasp for some necklaces and bracelets.

Whilst the horseshoe is now widely acknowledged to be a symbol of good luck; the late 19th century really brought this to fruition.

Horseshoes are a symbol of luck and protection, and when there was an increase in superstition in the latter half of the Victorian era, they shot up in popularity. It was thought that the horseshoe needed to be worn facing upward, or the good luck might pour out.

Four-leaf clovers also became a popular symbol of luck in this century as the Irish began to emigrate to Britain, bringing with them beliefs and blessings. The four-leaf clover represents good luck, success and prosperity for the wearer. This brooch is a three-leaf clover from the same era. 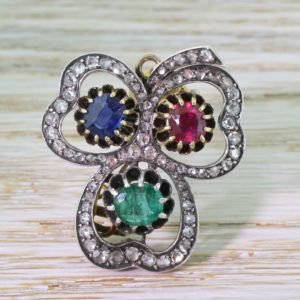 When Prince Albert asked for Queen Victoria’s hand in marriage in 1820, he did so with a ring shaped like a snake, set with emeralds. Following this, snake jewellery became all the rage, symbolising eternal love and wisdom.

As well as snakes, insects were also popular in jewellery. Butterflies and caterpillars were popular, as were dragonflies. Insects like these reflected change and transformations in life, embracing it rather than fearing it.

Birds of all kinds were depicted in Victorian jewellery, but the most common were swallows and doves.

Swallows were a very romantic symbol in antique jewellery. They were said to represent faithfulness. Typically, an item with a swallow on it was presented to a loved one as they set out on a journey or given from the person leaving to the loved ones they left behind. It was a reminder of the love shared and a promise to return home safely.

Doves were traditionally crafted alongside the word ‘Pax’, the Latin for peace. Often, they were depicted holding an olive branch to display peace, friendship and the bringing of hope. The dove is an internationally recognisable symbol of faith and hope, and the Victorian meaning was no different.

Since the 1830s, flowers grew in popularity as a gift and a way to express sentiment. Flowers were used to express love and friendship, and different flowers held different meanings.

This extended into the usage of flowers in jewellery:

⟵ Famous Art Deco Jewellery Pieces
Back to the blog
What Is A Ballerina Ring? ⟶