Snake rings or serpent rings have been popular throughout history, often representing eternal love. Some snake rings feature gemstones set along the snake’s body, creating the illusion of a snake in motion when the light catches them, while others are plain metal designs with accent gemstones in the snake’s head.

A popular variant of regular snake rings or jewellery is in the style of the mythical creature Ouroboros. These designs feature the snake eating its own tail, creating an eternal loop that’s long been a symbol of life and time. Other styles of snake rings include ones that wind around the wearer’s finger and double serpent rings. 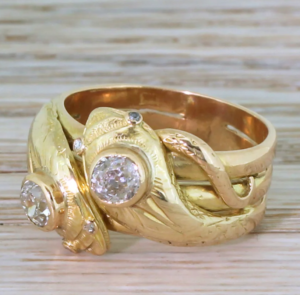 The circle has always been a significant symbol representing wholeness and perfection, and rings have symbolised eternal love for centuries, particularly in Christian marriage ceremonies. Snake rings add to the symbolism of the circle, with different significance in several cultures.

In Greek mythology, snake rings were worn in honour of the Greek healing god Asclepius, who Zeus struck down as he feared Asclepius would transform all of mankind into immortals. Today, the snake is still the symbol of medicine.

In Ancient Greece and Ancient Rome, snakes were regarded for their skin-shedding as a symbol for regeneration and rebirth. Snake rings also appear as symbolically significant artefacts in many religions, including Christianity and Hinduism, as well as cultures in the Aztec, Norse, and Chinese civilisations.

In the Victorian era, snake rings were extremely popular and were often worn with a serpent style bangle, brooch, or hatpin. They were often set with diamonds along the length of the band with precious gemstones such emeralds, rubies, and sapphires inlaid in the head to represent eyes.

The Victorians were influenced by the treasures of Roman and Greek times, so much so that they replicated many details of the visual culture of the Ancient world.

The snake ring peaked in popularity when Queen Victoria opted for a gold snake design set with rubies, diamonds, and an emerald for her engagement ring; a particularly unusual style. As time wore on, snake jewellery and other Ancient Egypt inspired pieces (such as insect jewellery) came into fashion due to influences on Britain from the excavation of Tutankhamun’s tomb.

Snakes were also a popular motif in Art Nouveau jewellery – aligning with the movement’s flowing, fluid lines. The pattern and colour of snakeskin lent themselves to the vibrancy of the Art Nouveau design.

Why are snake rings so popular?

The snake ring may also have been popular in the Victorian and Edwardian times because of the shift in post-industrial revolution manufacturing processes. The industrial revolution saw jewellery made by machines, as opposed to painstakingly hand-crafted. This meant jewellery became cheaper, making it more accessible to the wider population.

The Victorians had a penchant for birthstones and incorporated as many gemstones as possible into their jewellery. Prince Albert chose a gold snake ring with an embedded emerald as it was Queen Victoria’s birthstone – it’s believed she was buried wearing her snake engagement ring.

Origins of snake rings are easier to trace compared to most antique jewellery as many of the rings produced included substantial amounts of gold, which were inscribed with full hallmarks, including makers’ marks and date letters.

Other types of snake jewellery

Although rings have typically been the most common and popular form of snake or serpent jewellery, given the obvious parallels between a ring and a snake, other forms of jewellery have seen serpentine influence, too.

Snakes have been used as a motif throughout history in jewellery including pins, bracelets, and necklaces. Serpent-inspired necklaces have proved particularly popular, thanks to the shape of a necklace lending itself to a snake’s form.

This Victorian snake necklace set with rubies and diamonds from around 1860 is a great example of how snake motifs can be used in highly distinctive pieces. 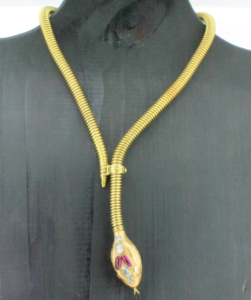 ⟵ The Significance of Birthstones: July and Ruby
Back to the blog
A Guide to Vintage and Antique Men’s Jewellery ⟶