What Is Victorian Insect Jewellery?

The Victorian era was one of change, with the industrial revolution bringing drastic alterations in society and culture. Increasing numbers of people moved to towns and cities for work, so much so that the countryside became a place of nostalgia that was often romanticised.

With the rise of factories and the introduction of mass-produced consumer goods, prices fell and certain luxuries became more attainable for a larger segment of the population. Large commercial firms produced high-quality jewellery ranges designed to suit the tastes (and wallets) of the middle classes.

One of the key identifiers of Victorian jewellery is the mixing of several gemstones on one piece, such as in this natural pearl and old cut Victorian diamond ring, circa 1870. 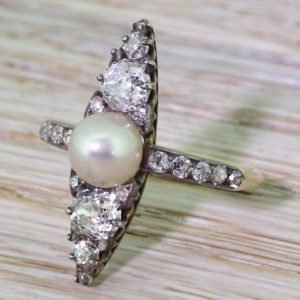 Another trend that emerged during the Victorian era was the use of insects such as moths, beetles and bees. This development was in part influenced by the British interest in Egypt that accompanied the building of the Suez Canal between 1859 and 1869. In Ancient Egypt, scarab beetles were a common symbol of good luck and appear as a motif in much of their jewellery.

Why did Victorians wear insect jewellery?

Partly inspired by the Ancient Egyptians and in part by a renewed love of nature and the countryside in light of rapid urbanisation, natural motifs like insects were seen as genteel, nurturing and virtuous.

It was in the 1860s that Victorian women first began to wear beetles and other insect motifs on their clothes and accessories, with parasols, hats, and shawls often featuring insects, as well as bracelets, earrings, and rings.

The jewellery created to fit this new trend included precious gems in their designs, enhancing the colourfulness and vividness of the pieces as well as adding intrinsic value. Insect bodies were often represented with large gemstones or pearls or were sometimes crafted in precious metals which were then encrusted with smaller gems.

The insect jewellery that was in vogue during the Victorian era is still desirable today, with the value of the precious stones only adding to the curiosity and uniqueness of the concept. 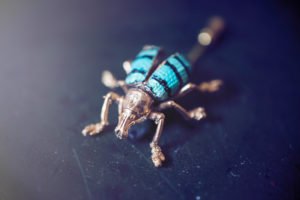 It wasn’t only insect motifs that were used by Victorian jewellers, the trend was pushed to its limits with live insect jewellery. Some Victorian women wore live beetles encrusted with gemstones, kept in tiny gold cages and attached to their clothes or lapels with a pin.

Even at the time, wearing live insects wasn’t a popular style and the fashion was ridiculed by the media. Mrs H R Hawes, author of The Art Of Beauty, which was published in 1883, scathingly wrote that ‘the large and gaudy insects that crawl over them are cheap and nasty to the last degree… at present, the bonnets and the brains they cover are too often not unfit companions’.

It was also common to see earrings, necklaces, and bracelets made with the shells or wings of beetles, insects that can be iridescent. Unlike the use of live insects in jewellery, this trend has actually survived to modern times, with Bibi van der Velden making use of untreated scarab wings in bangles, rings, and earrings.