The History of Art Nouveau Jewellery

Art Nouveau was a fleeting movement (circa. 1898-1910) that, despite its transience, had a profound, lasting impact on jewellery design and many other arts. The glittering period ushered in innovative and entirely different design principles to preceding eras, countering the prevalence of mass-made jewellery.

In this blog, we appraise the Art Nouveau movement, from its primary influences to some of its eminent jewellery designers.

Art Nouveau designers instilled new jewellery characteristics, coveting free-floating forms from the natural world. Seminal artist-jewellers including Henri Vever and Georges Fouquet used semi and non-precious metals on occasion, with such standout pieces coveted for their design and craftsmanship rather than their monetary value.

However, the genres undisputed pioneer was René Lalique, whose oeuvre embodied the true essence of Art Nouveau.

The height of Art Nouveau

Arguably, the most creative and original Art Nouveau jewellery pieces were produced during a brief yet fervently creative stint between 1898 and 1906. While Lalique and others continued to create great works after this period, innovation receded somewhat, superseded by elaborate decoration.

The period’s dusk between 1908 and 1910 signalled a nascent taste for clean, simple lines and a penchant for platinum and engraved crystal.

Art Nouveau is often described as an art total due to its permeation of every art form, from jewellery and architecture to music and literature.

Lalique, for example, synthesised several arts in his jewellery. Working with a plethora of shapes, contours, colours, and relief, he channelled the essence of sculpture and paintings into his breath-taking jewellery.

His use of hard or semi-precious stones, ivory, glass and enamel, refined his artistic palette and perhaps broke more boundaries than his counterparts who were painters or sculptors.

Jean Cassou, the first director of the National Museum of Modern Art, Paris, claims Art Nouveau elicited a drastic artistic direction change and a break from the shackles of 19th-century tradition.

The concept of art total re-emerges here, with artisans embracing the female form (inspired by the Renaissance), and later, the rediscovery of enamel techniques and the influence of nature-inspired by ceramicist Bernard Palissy.

Plant symbolism also inspired many Art Nouveau designers. Ivy, for example, is an ancient symbol of fidelity and longevity; it’s evergreen and grows almost anywhere. On the other hand, roses, brambles and thistles are beautiful but covered with thorns, possibly conveying a ‘keep your distance’ message.

René Lalique’s distinct iconography and use of exotic, fragile materials like moulded glass and enamel were revolutionary, but other Art Nouveau jewellers made sizeable contributions to the movement:

Founded in 1821, the House of Vever started producing jewels evoking the Renaissance style half a century later. Henri Vever first exhibited at the Salon in Paris in 1900, and his book, La Bijouterie Française au XIXe Siècle, is regarded as the chief reference for 19th-century jewellery.

Fouquet was a trailblazing Art Nouveau jeweller who collaborated with Czech painter Alphonse Mucha on several seminal commissions, including a bangle and ring for French actress Sarah Bernhardt. The piece became the most expensive Art Nouveau jewel ever sold at auction (Christie’s, 1987) — equivalent to more than £1 million in today’s money.

Gaillard was inspired by Japanese art, which permeated his jewellery designs. His firm was renowned for its masterful metalwork in the Japanese style – he even recruited artisans from Japan to work at his Paris atelier, a remarkable feat in 1900.

Why did Art Nouveau go out of fashion?

Maurice Rheims’ publication of L’Objet 1900 in 1964 ignited an Art Nouveau revival. The influential work sparked renewed interest in the abandoned movement among antique dealers and collectors, which has remained to this day. 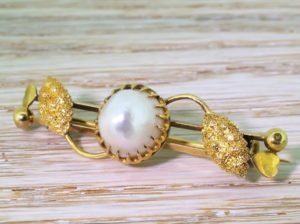 An exceptional natural pearl, beautifully showcased. The blister pearl (meaning the pearl grew attached to the mollusc shell resulting in its irregular dome shape) is claw-set in a hand-made collet. The pearl’s smooth, creamy lustre contrasts with the hammered vine leaves – with subtle heart details at either end embellishing this Art Nouveau beauty. 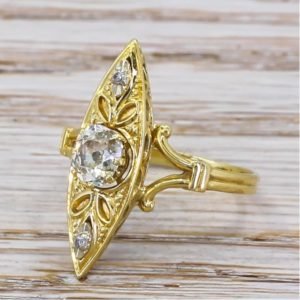 Eight-claws secure the central old cut diamond within a long, elegant marquise shaped head, while a trio of marquise-shaped leaves adorns either side. Wide, U-shaped detailing in the gallery leads to a slim, split shank that beautifully splits at the shoulder. 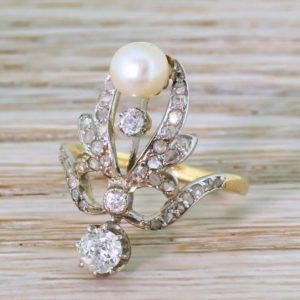 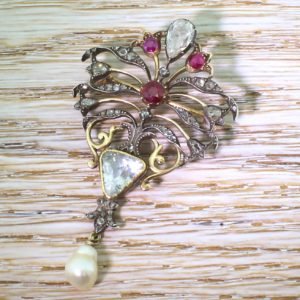 This flowing brooch features a pear rose cut diamond at the top in a cut-away setting, bisecting a pair of ruby flowers. A pigeon blood red ruby sits at its heart, flanked by sweeping gold and silver flowers and vines. A large, triangular rose cut diamond sits at the bottom, with a natural baroque saltwater pearl dangling from a diamond set trefoil motif. A truly stunning Art Nouveau piece.

⟵ A Guide to Moonstone Jewellery
Back to the blog
What Is A Star Sapphire? ⟶