French jeweller and glass artist, Rene Lalique, is famed for his elegant designs. During the early 20th Century, his unique jewellery and glasswork made a significant contribution to the Art Nouveau movement.

Born in 1860 in Ay, France, he spent his early life learning the art and design methods that would define his process for the rest of his life. Lalique’s family moved to Paris when he was two, but they frequently returned to Ay for summer holidays. These summer trips influenced Lalique’s naturalistic pieces: inspired by plants and flowers and featuring flowing lines and bright gems.

In 1872 aged 12, Lalique began studying at the Collège Turgot, where he was able to devote time to drawing and sketching. Here, his love of the decorative arts grew, and he started attending evening classes at the Ecole des arts décoratifs.

After, he travelled to London to spend two years at the Crystal Palace School of Art, where he became an apprentice goldsmith to Parisian jeweller Louis Aucoc. Here, he was able to refine his naturalistic approach to design.

After returning to France, Lalique worked as a freelance artist and designed pieces for high-end French jewellers such as Cartier, Jacta and Boucheron. In 1885, he started his own business making jewellery and glass pieces.

After developing his style and client base throughout his first decade in business, Lalique went on to create pieces for the Maison de l’Art Nouveau after 1895. This is also where the Art Nouveau movement gained its name.

Lalique’s works were reportedly commissioned more than 140 times over 30 years by the British-Armenian businessman and philanthropist, Calouste Sarkis Gulbenkian. At the time, his work was considered to be fashionably elegant – it was the epitome of the modern-day arts and crafts scene.

Although profiled here for his jewellery, Lalique is best known for his glasswork, which adopted an Art Deco aesthetic in the 1920s.

Many of Lalique’s glass creations were on display on the SS Normandie: everything from the walls, the grand salon and the columns in the dining room were made of elegantly coloured Lalique glass.

Lalique’s unique and commercial creations can be found in numerous leading museums around the globe, including:

Jewellery designs in the style of Lalique 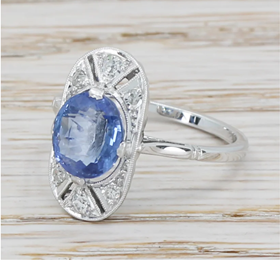 This magnificent French antique sapphire ring is in the style of Lalique, with an oval cut centre stone and its strong blue colour gem. Set with six eight-cut diamonds with fine graining and vent detailing, the ring also has scrolling detail in the platinum – a truly beautiful piece. 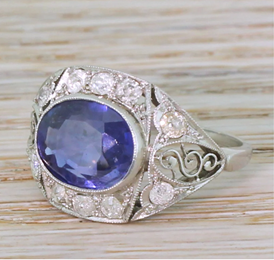 This stunning Ceylon sapphire is showcased in an equally beautiful ring. The oval cut sapphire – certified as natural and unheated – is set laterally in an impressively ornate mounting. Six old cut diamonds are set to the north and south of the ring, with fine piecing and milgraining in the diamond set shoulders embellished with decorative swirling detailing. 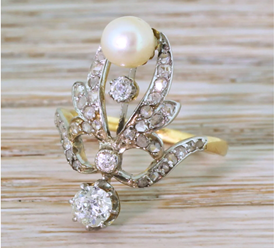