Home / Blog / The Significance Of Birthstones: August And Peridot

The Significance Of Birthstones: August And Peridot

Peridot – a vibrant yellow-green variety of the mineral olivine – is the birthstone for August. Often confused with topaz and emerald due to the tonal similarities, peridot’s formation in the Earth’s mantle shares a path that’s similar to the most precious gemstone in the world: diamond.

Notwithstanding its similarities to other crystals, peridot is a beautifully unique gemstone in its own right, its popularity stretching back millennia. This is no doubt due to its striking green hue, which works wonderfully with yellow gold and silver jewellery.

Peridot is often associated with strength and protection for the wearer. Regarded by the Romans as the ‘evening emerald’, as it does not change colour under artificial light, peridot’s association with strength is fitting. In fact, it was once thought that peridot crystal found in volcanic ashes were the tears of the volcano goddess, Pele.

As well as strength, peridot is thought to instil power and influence, and in some ancient cultures, magical powers and healing properties that protect the wearer against nightmares.

Peridot is thought to be one of the oldest known gemstones, potentially having been mined from the Earth from as early as 1500BC. The Egyptian island of Zabaragad (now called Topazios) is the oldest recorded source of the birthstone, with mining beginning here as far back as 340-279 BC.

The word peridot originates from the Arabic word for gem, which is ‘faridat’. There have been several hugely notable peridot stones throughout history, including Cleopatra’s famous emerald collection (which is now thought to have been mainly made up of peridot gemstones) and the stones adorning the shrine of the Three Holy Kings in Cologne Cathedral.

Where is peridot found?

Peridot can be found all over the world, with countries such as China, Myanmar, Pakistan, Tanzania, Vietnam, and the USA producing significant sources.

Myanmar is a significant peridot source; its Mogok mines producing sparkling, transparent crystals that you can find scattered around its mountains. In the United States, Arizona is the chief peridot source, with crystal formation resulting from the volcanic eruptions of bygone millennia.

Peridot has a hardness of 6.5-7 on the Mohs scale of hardness, making it softer than many other gemstones. Therefore, it is not suited to everyday wear. The stone is particularly susceptible to acid-damage, and even through long term exposure to perspiration. Due to its delicacy, you should take the utmost care when cleaning peridot, which means avoiding steam or ultrasonic cleaners, as peridot is vulnerable to thermal shock.

August birthstone jewellery is popular thanks to peridot’s relative abundance and attractive appearance. August birthstone rings, in particular, make use of small to large peridot gemstones, typically set in silver or gold shanks. 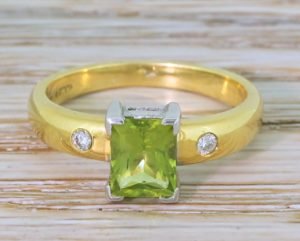