What is Victorian Mourning Jewellery?

The Victorian era spanned from 1837, when Queen Victoria ascended the throne, to her death in 1901. Death was a part of life in Victorian times. Mortality rates were high; life expectancy was low. In 1841, the average newborn girl was not expected to reach her 43rd birthday. These factors, along with other cultural quirks, led to the popularisation of mourning jewellery.

Following the death of Prince Albert in 1861, mourning etiquette and funerals became increasingly lavish. Victorians sought comfort in religion and the memorialisation of the dead.

As it was considered bad luck for mourning clothes and accessories to be kept after the official mourning period ended, dressmakers, milliners, and jewellers did a roaring repetitive trade creating black clothes and jewellery for Victorian mourners – many of which survive today.

What was a mourning period?

Mourning the dead in the Victorian era came with a set of rules and etiquette set out in handbooks by those occupied with propriety and morality.

These rules were especially followed by the upper classes, who had the time and money to go to every extreme in their outward display of grief. As could be expected, working-class people were unable to indulge in long mourning periods – reduced earners in the family due to death often meant that times were hard.

For women, heavy black garments and veils were worn with black bonnets or hats and black gloves. Even particular fabrics, like crepe, became synonymous with mourning because of their weight and depth of colour. Mourning jewellery was also required to be the deepest black and often made from jet or with black enamel. Occasionally, the hair of the deceased was arranged in a pattern and placed into the item of jewellery. 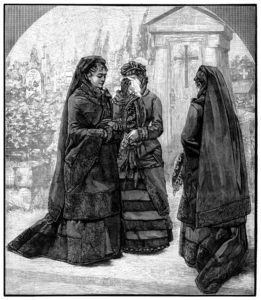 The mourning period was not short. Widows were expected to wear mourning attire for up to two years following the death of their husbands, although it was often worn for the rest of their lives. This included three months of wearing a heavy black veil over their face. Whilst in full mourning (immediately after the death), the woman would wear only black. In half-mourning, dark colours like grey, navy blue or purple could be reintroduced into the wardrobe.

This show of mourning was representative of the Victorian morality code: the idea of ‘good’ and ‘evil’. Deep and long mourning showed respect and humility, whilst a short mourning period could set tongues wagging in Victorian society.

Victorian mourning jewellery was primarily focused on memorialising the individual. Often, jewellery would be inscribed with the name, birth, and death date of the loved one.

⟵ Spotlight on: Paul Flato
Back to the blog
Significance of Birthstones: May and Emerald ⟶