A Guide To Royal Jewellery

When royalty comes to mind, you can’t help but think of jewellery. Crowns are synonymous with the monarchy, as are golden thrones and diamond-encrusted sceptres. The British monarchy is one of the oldest in the world, and definitely the most famous, giving them plenty of time to acquire a jewellery collection one could only dream of.

Their collection is extensive, with some of their tiaras and trinkets dating back to the 17th century – including the iconic components of the Crown Jewels. Throughout the years, royal jewellery has been the primary focus of major events: coronations, engagements, weddings. It’s always the jewellery that steals the show. Jewels tend to tell sentimental tales, and royal jewels are no different.

Who owns the royal jewels?

Royal jewellery tends to be inherited or gifted, and priceless jewels have been passed down for centuries from one generation to the next – it tends to be kept in the family. This is why we frequently, for example, see the Duchess of Cambridge in the recognisable Lover’s Knot tiara, a favourite of Princess Diana’s, alongside a variety of other royals in a multitude of necklaces, bracelets and the like.

Whilst some of this jewellery is centuries old, the royals aren’t afraid to update it. Pieces are frequently modified to keep them relevant and make sure they are being worn rather than gathering dust. Royal jewellery is an all-encompassing term, and it refers to three separate categories:

The reigning sovereign owns the first two, and these move in succession from monarch to monarch. The Queen’s personal jewels are owned by herself, and whilst she loans them out from time to time, they are still her possessions.

There are, of course, miscellaneous pieces, such as engagement rings, that are owned by the wearer. Some also have their own tiaras, like the Spencer family tiara.

The phrase ‘Crown Jewels’ refers to the regalia used in ceremonies of the state, such as a coronation or the State Opening of Parliament. They reside and are displayed in the Tower of London, where over 30 million people have seen them in their present state. They are a unique working collection; they are not just displayed relics but are used from time to time when necessary.

The coronation regalia is at the heart of the Crown Jewels collection. This is a group of highly symbolic, incredibly precious items used since 1661. These jewels physically embody the transfer of power from one monarch to another during the coronation ceremony. They contain some of the world’s largest and most exceptional diamonds.

History of the Crown Jewels

The Crown Jewels have existed since 1661 when Charles II had them commissioned for his coronation. They were created as replicas of the ones that Oliver Cromwell had destroyed during the Restoration, as they were symbolic of the “detestable rule of kings”. Cromwell had the jewels broken down, with semi-precious stones sold and the metal sent to the mint to be melted down and turned into currency.

There were, however, records of the original regalia, which Charles II was able to use to recommission them. The Crown Jewels as we know them comprise the regalia, alongside robes, crowns acquired by various monarchs and a variety of other items like royal christening fonts. There have been many additions and alterations, such as creating new sets of regalia for James II’s wife, the first Queen Consort following the Restoration, and Queen Mary II when she was crowned in her own right.

The regalia itself is still used, and the British monarchy is the only European monarchy still using its regalia for the coronation. During WWII, the Crown Jewels were taken from the Tower of London and hidden in a secret location – a location which has never been disclosed to this day.

This is the most important and sacred of any crown or tiara in the royal jewellery collections, as it is the one placed upon the sovereign’s head to signify their coronation – the moment of crowning itself. It is a solid gold crown, made as a replacement to the medieval crown destroyed by Cromwell.

The crown is adorned with varying precious and semi-precious stones, including diamonds, rubies, and tourmaline. Before 1911, the stones themselves were borrowed when a coronation took place. When George V was to be coronated, the Royal Family invested in the jewels we see embedded in it today.

The Protector of Good

This title references the orb and jewelled sword of offering presented to the sovereign. The sword was created in 1820 and is presented to the new monarch as part of a collection of ornaments which represent the chivalric nature of kingship. The orb constitutes the second object, and it is made of solid gold and precious stones. It depicts a cross mounted on a globe.

This is placed in the monarch’s hand in the last part before the crowning itself, along with another sceptre topped with a dove. The sceptre mounted by a cross has been used at every coronation since 1661, and since 1910 has featured the majestic Cullinan I diamond at its heart.

The Cullinan I diamond is the biggest top-quality cut white diamond in the world, weighing a whopping 530.2 carats.

This is the most extravagant and perhaps the most recognisable element of the Crown Jewels. This crown is one of the newer items in the collection and is the one worn as the monarch leaves Westminster Abbey following their coronation.

The second largest stone, the Cullinan II, adorns the front band of this crown. It contains some 2868 diamonds, 17 sapphires, 11 emeralds, 269 pearls and 4 large rubies.

The Queen herself owns over 300 pieces of jewellery, all of which have been passed down or gifted to her. She never gives pieces as gifts outright, but she does loan things to relatives for special occasions. The most notable items loaned by the Queen are her tiaras, frequently worn on wedding days and at special events.

This was the tiara loaned to the Duchess of Cambridge for her wedding day. The tiara was initially given as an anniversary gift from George VI to his wife in 1936 and then passed to their daughter Elizabeth II. The tiara contains over 1000 diamonds and was also worn occasionally by Princess Margaret.

This tiara was worn by the Duchess of Sussex on her wedding day. It was originally commissioned for Queen Mary and made by royal jeweller Garrard in 1925. This was given to Elizabeth II by her grandmother, and originally had a large sapphire at its centre. This was later changed to a diamond.

This tiara was one of Diana’s favourites, and the Queen loaned it to her for an extended period of time. It features diamonds and 19 pearls suspended within its frame and was also created by Garrard in 1913. Diana returned it following her divorce from the Prince of Wales in 1996, and since then it has become a favourite of the Duchess of Cambridge, who has been seen wearing it on a few occasions.

Elizabeth II, Princess Anne and Princess Beatrice all wore this tiara on their wedding day. These are the first instances of a modern royal bride wearing a tiara donned by another ancestral royal for her wedding day. The tiara itself is an all-diamond design and is notable very fragile because of this. In fact, on the Queen’s wedding day, the hairdresser accidentally snapped it before the ceremony. It had to be escorted by the police to Garrard’s workshop to be repaired.

This sapphire and diamond brooch was given to Queen Victoria by Prince Albert on the day before their wedding. She loved it so much that she pinned it to her wedding dress the following day.

In her will, she designated the piece “an heirloom of the crown”, which means the piece should only be worn by future queens and queen consorts. The Queen wears this brooch regularly, and it is said to have inspired the House of Garrard when designing the engagement ring sported by Diana and the Duchess of Cambridge. There have been a few replicas of the brooch, with Princess Anne seen wearing one occasionally.

There are few pieces of royal jewellery talked about more than the rings involved in royal engagements. Even in a non-royal engagement, first thing anyone asks is to see the ring, so these circumstances are no different, Alongside their engagement rings, royal brides traditionally have a gold wedding band made from pure Welsh gold.

These two women notably have the same ring, with Prince William choosing his late mother’s jewels to propose to his now-wife. Diana’s ring caused quite the scandal at the time: she is said to have chosen this ring herself, but it was not bespoke. Rather, it came from Garrard’s catalogue.

The ring itself is an oval, 12-carat sapphire surrounded by a cluster of 14 solitaire diamonds set in white gold. This is not only one of the most famous royal engagement rings, but probably the most recognisable ring of all time. The ring is not dissimilar to a 4.44 carat sapphire and diamond cluster ring that we have, although this ring was produced before Diana’s, and is round as opposed to oval. 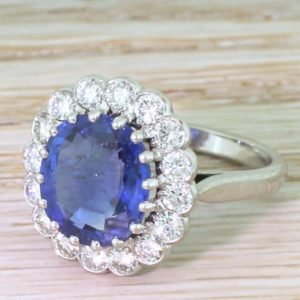 The Queen’s engagement ring is a 3 carat round centre stone, flanked with ten smaller diamonds. When Prince Philip initially planned to propose, he was not wealthy – despite his status as a royal in his own right. His mother, Princess Alice, gave him a tiara she received as a wedding gift so he could dismantle it and create a ring.

Prince Philip designed the ring himself, but if you want a ring fit for a queen we recommend this 2 carat Art Deco ring from 1930. 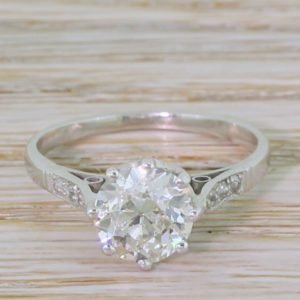 Princess Margaret was engaged twice, and both her engagement rings had rubies at their centre. Her husband, photographer Antony Armstrong-Jones, designed her ring to look like a rosebud, reflecting her middle name, Rose. The ring itself is a ruby surrounded by diamonds, thought to look a bit like this one, albeit slightly larger. 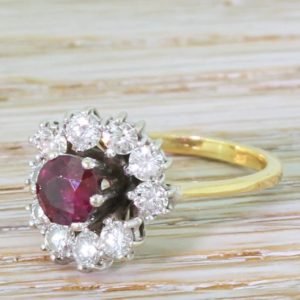 Whilst Catherine’s ring is Diana’s, Meghan’s features diamonds taken from a brooch belonging to Harry’s beloved mother. This ring features a 3-carat cushion-cut diamond, which was ethically sourced in Botswana (a place the couple have frequented together).

This centre stone is flanked by two diamonds from Diana’s brooch and set on a yellow-gold band. The ring was modified around the time of their first son’s birth to feature even more diamonds set around the band.

Anne’s engagement ring is almost identical to this three-stone sapphire and diamond ring, circa 1940. The ring features a 2-carat cabochon-cut sapphire, with three small diamonds either side of it. It is a true 1970s style ring featuring an intriguing design – unique enough for royalty. 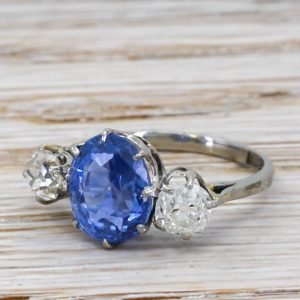 Bizarrely enough, Victoria’s engagement ring was not the classic style one would see today. Her engagement ring was modelled as a serpent, twisting itself around her finger. Whilst this is strange by modern standards, in Victorian times the serpent represented wisdom, loyalty and commitment. This works perfectly for the symbolic nature of engagement. The ring was yellow gold, set with rubies, emeralds and diamonds.