Deciding on your next diamond jewellery purchase can be a confusing process. To help, we’ve created a ‘Diamond Cut Guide’ to help you identify and differentiate between the diamond cuts most commonly found in vintage and antique jewellery.

A diamond cutter shapes a diamond to accentuate its qualities, downplay its flaws, for a specific piece of jewellery. The cut of a diamond refers to its shape, symmetry, and proportions.

Because the cut of a diamond creates different effects when light passes through the gem – known as brilliance – it’s important to know the difference between each one.

An example of this can be seen in this Light Yellow Old Cut Engagement Ring. 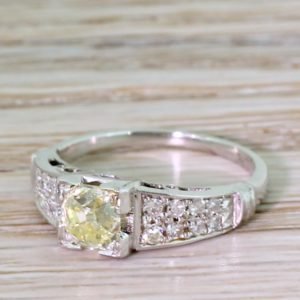 Even though the princess cut was only invented in the 60s, it comes from a lineage of square cut diamonds such as the barion cut and the quadrillion cut, with its origins stemming from the early French cut. Looked at from above, the princess cut diamond has a square rectangular shape with an X running through the middle. It’s technically known as the ‘square modified brilliant’.

What is a princess cut diamond?

The princess cut diamond is characterised by its geometric, sharp square shape – this is a contemporary cut, with angular, strong lines, and a pyramidal shape with four bevelled sides. Many modern diamonds are cut in this style, making it one of the most popular features of modern diamond rings.

Viewed from the side, a princess cut diamond has sloping edges. Before buying this diamond cut, you should know that because it features fewer cuts than a round diamond, it’s often less expensive. However, its four sharp points are more prone to damage, so it’s important that these are protected when the stone is set. 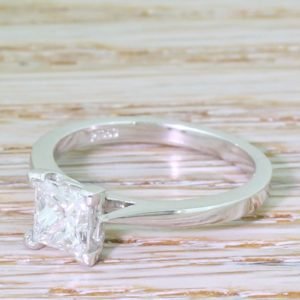 The origins of the marquise cut diamond can be traced back to the 18th century when King Louis XV of France commissioned a jeweller to cut a diamond to resemble the lips of his mistress, Jean Antoinette Poisson. Because of its elliptical shape, this diamond cut is also known as the football, boat, or eye-shaped cut. Like most modern cut diamonds, it has 58 facets. When looking for a marquise cut, look out for the bow-tie effect, which is a dark bow tie like a shadow in the centre of the diamond.  A well-cut diamond should hide this with its brilliance.

Here is an example of this type of diamond in an old marquise cut diamond engagement ring. 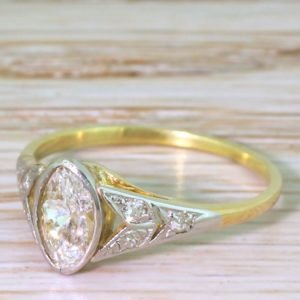 The marquise cut is also used on emeralds, rubies and sapphires such as in this marquise cut ruby and rose cut diamond navette ring. 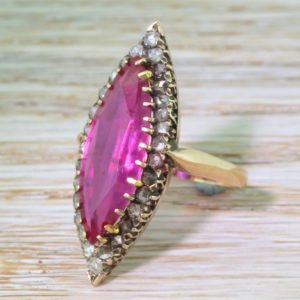 Cushion cut diamonds can be a wide variety of shapes, as long as they fall within the classification of a rectangle and have a slight curve to the edges, so as to resemble a cushion. With 58 facets and rounded corners, the cushion cut has its roots in the old mine cut. Like the old mine cut, the cushion cut diamond produces kaleidoscopic effects and many diamond cutters use this cut to drastically improve lesser-quality stones. 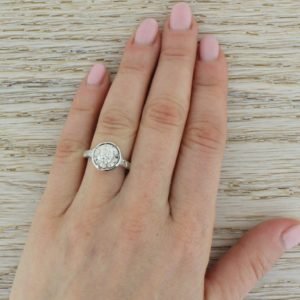 Old mine cut diamonds are named as such because of their age. In the late 1800s, when diamond production in Africa was outpacing mining operations in Brazil and India, the distinctive, colourless, square-shaped diamonds that came from these ‘old mines’ became known as old mine cut diamonds.

One of the key features of the old cut diamond is the ‘inner fire’ they hold. This, jewellers say, is a result of cutting by candlelight and because of the large culet, high crown, and large table that are typical with the old mine cut. Like the Cushion cut diamond, mine cut diamonds produce kaleidoscopic effects.

Here’s an example of a fiery old cut diamond in our 1.53 carat old mine cut ring. 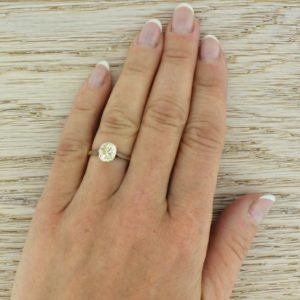 What is an Asscher cut diamond?

An Asscher cut diamond is an octagonal diamond with a square shape and layered facets. It features a high crown and a deep pavilion, creating a brilliant shine. There are standard and Royal Asscher cuts, both created by the Royal Asscher company.

Asscher cuts look similar to emerald cuts, except they are square and not rectangular. Like the emerald cut, the Asscher cut involves cutting the pavilion, or the underside of the diamond, in steps or layers. The effect this produces is referred to by diamond experts as ‘the hall of mirrors’ effect, creating flashes of light that appear to come from within. Here is an example of Asscher cut diamonds used not as the centrepiece but to adorn the shank of a diamond and emerald halo ring. 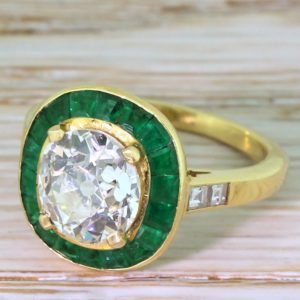 The pear cut diamond owes its existence to the Flemish diamond cutter, Lodewyk van Bercken, who also invented the scaif, or the diamond polishing wheel. With a scaif it became possible to polish all the facets of the diamond symmetrically at angles that reflected the light best. The pear cut diamond combines the round and the marquise shape, with a tapered point on one end. While it’s entirely up to the wearer how they want to wear the ring, it is traditionally said to be worn with the narrow end pointing towards the hand of the wearer.

Used in rings, earrings and pendants, this cut has fifty-eight facets and is created using similar techniques to those used in the creation of brilliant cut diamonds. An example of the pear cut diamond is this Victorian 0.80 carat pear cut cluster ring. 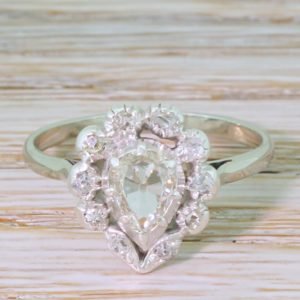 The old European cut diamond sits in the middle of the evolution of the modern round brilliant cut. Successor to the old mine cut and predecessor to the modern brilliant cut, this diamond cut still has that ‘inner fire’ antique collectors look for and was the standard round diamond cut used between 1890 and 1930. Characteristics of the old European cut include a large culet, (which is the bottom of the diamond); a small table, (which is the top of the diamond); and a frosted girdle, (or the section on the diamond that encircles the crown and pavilion).

Like the modern brilliant cut and the old mine cut, the old European Cut is made to have fifty-eight facets. What’s different about the old European cut is that the facets are larger than on its modern counterpart. This creates a unique effect, forming larger patterns of lightness and darkness within the diamond when compared to the modern brilliant cut whose sparkle might be referred to as splintered.

Here’s an example of the old European cut in an Art Deco style engagement ring. 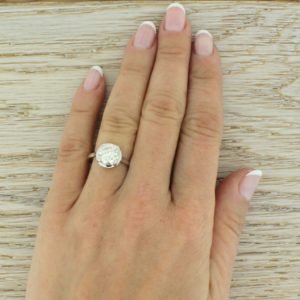 The rose cut diamond dates back to the 1500s, making it one of the oldest diamond shapes. The facets are said to resemble the petals unfolding in a rosebud, which is where it gets its name.

Here’s a great example of a rose cut diamond in this 0.77 carat diamond cluster ring. 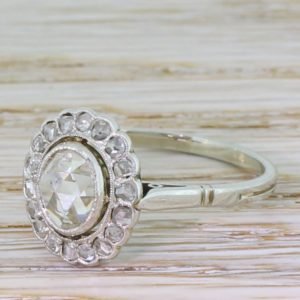 The emerald cut, as the name suggests, was first used on the emerald. Later, cutters found these same techniques to be beneficial on diamonds. Today, this diamond cut is sought after for its modern look, but the truth is that this style of cutting can be traced back to the 1500s. The technique that gives the emerald cut its very distinctive look is called ‘step cutting’ and involves cutting layers into the diamond’s pavilion, cropping the corners and making them even. This cut became popular because it reduced the pressure during the cutting process and prevented chips in the gems.

This cut can be best seen in this 25 carat emerald cut citrine pendant.

The modern round brilliant cut diamond is the final stop in the development of the round diamond cut and the result of diamond cutting advancements that span more than six centuries. This diamond cut owes its aesthetic to modern cutting technology that is producing sharper edges and gives diamonds more sparkle than the old mine cut and old European cut diamonds. For some, this is a desirable feature. But for admirers of antique cut stones, the modern brilliant cut diamond lacks that ‘inner fire’.

With it being one of the most popular cuts for engagement rings, most diamonds found these days end up being cut in this style. As you’ll see in the illustration below, the modern round brilliant diamond cut is like most other diamonds, cut in 58 facets. 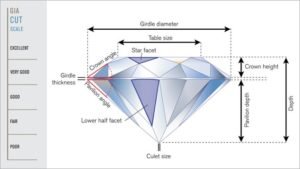 Now that you have a good overview and a solid understanding of antique diamond cuts, we hope you enjoy your search for your perfect diamond. Be sure to look through our antique jewellery shop which features countless beautifully crafted diamonds, or give us a call or send us a message if you have any questions.

What is a rub over setting?

A rub over or bezel setting places a diamond in the middle of a circle of metal, which is then folded around it to catch the hips of the diamond at its widest point to lock it in place. When complete, the stone is surrounded by metal, creating a halo.