The Characteristics of Georgian Jewellery

The Georgian era (1714 – 1837) takes its name from four of the five kings that ruled during the period: George I, II, III and IV. It was a period of vast change, exemplified by the early stages of the industrial revolution and the formation of the United States of America.

It was also a period during which there were significant developments in jewellery and marked the beginning of many mass-production methods.

The jewellery of this era was innovative and distinctive. This post discusses different items and styles of antique Georgian jewellery, their unique characteristics, and the techniques used to manufacture them.

Mourning rings were popular in the Georgian age for both men and women. These pieces, commissioned by mourners to memorialise their loved ones, commonly featured black enamel and often contained the woven hair of the deceased in the design. 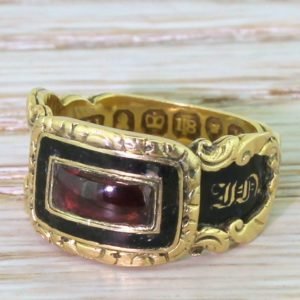 Other styles of rings during this period featured fine metalwork set with large gemstones and were an opportunity to display wealth and status. 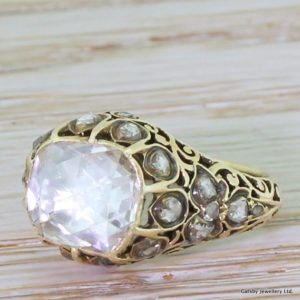 Pendeloque earrings featured a round top with a bow motif and had pear-shaped drop metalwork, often with inset diamonds. These earrings were common in the mid-Georgian times, as their length provided a contrast to the tall wigs that were worn during the same period.

Pendants were widely popular as the wide-sweeping necklines on dresses of the time provided a space for intricate necklaces to be displayed. Pendants commonly matched earrings or brooches to create a consistent style. Some brooches were designed to transform into necklaces with the addition of a ribbon or chain. 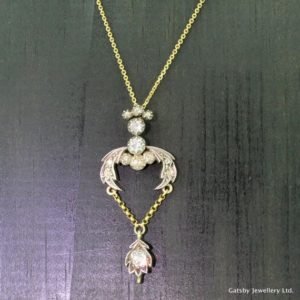 Chatelaines have completely fallen out of favour in modern times. These decorative belt clasps were worn at the waist, and a series of chains which held useful and decorative accessories such as watches, scissors, thimbles, and keys hung from them.

The Georgian period saw huge advances in the techniques and technologies of diamond cutting. The most common cuts of this period were the table cut (square with a flat bottom), rose-cut (round with a domed top), briolette (teardrop-shaped) and, towards the end of the Georgian era, the old mine cut (similar to brilliant cut, but deeper and with a cushion shape).

Gemstones also increased in popularity during the later stages of the Georgian period, with ruby, topaz, sapphire, garnet, and chrysoberyl being the favourites. A less expensive option was paste jewellery – set with glass instead of precious gems. Paste jewellery can still be found today, mainly because the stones’ lack of intrinsic value means they haven’t been repurposed in new jewellery over time.

Iron and steel were used in cheaper jewellery, as they were less expensive than precious gold or silver but strong and durable enough to create long-lasting jewellery.

In terms of precious metals, however, diamonds were most often set in silver. Silver was the only white metal available at the time, as white gold had yet to be invented and platinum was still not used for jewellery purposes.

This is a technique that was used significantly in metalworking in the Georgian era – involving hammering the reverse side of a piece of metal to create raised designs on the front side. The detail was then added to the hammered design through engraving for extra detail.

En tremblant, meaning ‘to tremble’ in French, was a revolutionary mounting technique of the time, and one that’s unique to this day. It involved using coiled springs to set gemstones into rings, adding height and creating a trembling effect at the same time. This Georgian setting style creates especially wonderful effects with lustrous stones, with the movement helping the facets to catch and reflect light.

A parure is a jewellery set designed to be worn together. The most common forms were earring and necklace sets, but they also often included brooches, tiaras and bracelets. Parure jewellery included pieces with multiple uses such as brooches designed to double up as pendants by attaching a ribbon or chain and necklaces which could divide into a pair of bracelets.

Foil was often used as the backing material for gemstones with closed-back settings to improve their reflective qualities, allowing the stones to glisten more in the light. This method could also help to enhance the colour of the gemstone, giving a sapphire a more intense hue, for example.

Cannetille was a similar artform to filigree and was a metalworking technique that consisted of creating intricate designs made from thin wires or sheets of precious metals. Cannetille helped to add decoration to rings and suited the bold appearance of jewellery at the time.

Motifs were common in Georgian jewellery as wearers sought to represent their personalities or sensibilities through the items that they wore. In an age where women were so restricted, fashion and jewellery could be the perfect way to express your personality whilst respecting the boundaries of etiquette.

Found on mourning jewellery, mourning motifs such as skulls and bones, graves and angels were common. Bows were a key feature of pendeloque earrings, seen as a symbol of love and marriage. Whilst flowers were a common naturalistic motif conveying sentiment and friendship.