Engagement rings of different styles are always coming in and out of fashion, with different eras bringing different trends. Some of these trends stand the test of time and become staples, others get left behind. Here are some of the most popular vintage engagement ring settings recorded throughout history, sorted by the era in which they were popularised. 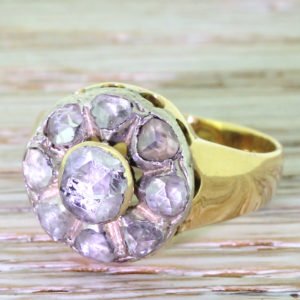 The Georgian period, 1714-1837, encompassed an era when Great Britain was reigned by George I, II, III, IV, and William IV.

During this period, the fashion sensibilities were for big and extravagant clothing and accessories. Jewellery that wasn’t equally as bold would be lost in the rest of an outfit, leading to the rising popularity of statement necklaces, chandelier earrings and diamond solitaire rings.

En Tremblant setting (meaning ‘to tremble’ in French) was invented in the 18th century which involved using coiled springs to create a trembling effect and add height to a piece of jewellery. Adding movement to jewels had the additional benefit of helping gemstones catch the light and sparkle. It was a technique often used to create realistic movement in floral pieces.

Closed-back settings were also standard at the time, whereby a piece of foil was used as a backing for a gemstone to improve its reflective properties or enhance its colour.

Finally, repousse, a metalworking technique that involved hammering metal into intricate designs from the reverse side, was commonly seen in rings and other jewellery.

You can find out more about Georgian jewellery, including Georgian antique rings, with our dedicated guide. 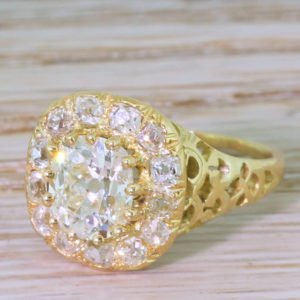 The Victorian period of 1837 – 1900, spanning the years of Queen Victoria’s reign, was a fascinating time in jewellery design with three distinct movements: the Romantic Period, the Grand Period, and the Aesthetic Period. Each was unique. However, several diamond cuts, setting styles and jewellery trends were continuously prevalent in the making of Victorian-era engagement rings.

The cluster setting, still used in rings today and commonly found in Victorian antique rings, involves a cluster of gemstones set closely together, often with a larger stone in the centre or to imitate floral designs.

The bezel setting is less commonly used today but was common when setting antique diamonds in vintage engagement rings. Bezel set stones are set within a metal (often yellow gold) collar or rim. This generally means they’re more secure and the gem is better protected – an appealing benefit in an engagement ring.

The buttercup ring setting is also rarely seen in modern jewellery but is a beautiful design, very popular amongst Victorian rings. This setting, unlike the bezel setting, is very open, maximising sparkle in the stone and creating a delicate, graceful appearance.

Animal motifs, snakes, insects and flowers were all hugely popular throughout the Victorian period, and black enamel and gold were both used prevalently. 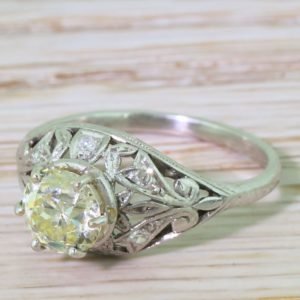 Although only spanning 1901 – 1910, this era was still significant in terms of the advancements in jewellery. The typically ostentatious Victorian designs were replaced with lighter, more refined engagement rings.

The use of filigree techniques in Edwardian rings helped to contribute graceful, more delicate pieces where gemstones seem almost woven into lace-like metalwork. Milgraining was used in the same time period, involving creating a row of tiny beads to mark the border of an engagement ring setting.

Platinum was beginning to be used more as metal refining techniques advanced, which allowed for greater flexibility in design and complementing certain gemstones more effectively than gold.

Pavé setting in diamond engagement rings were also popular, with lots of small gemstones, often European cut diamonds, set closely together, sometimes alongside a larger diamond. Each of these attractive design features are common amongst antique rings from this era. 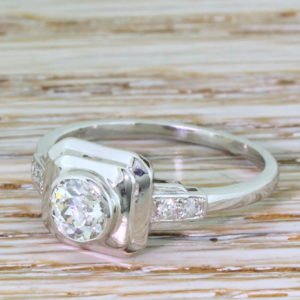 The four claw (or prong) engagement ring solitaire setting was introduced in the Art Deco period and allowed for diamond rings that had light, reflective qualities. Four-claw and six-claw settings remain hugely popular to this day.

This period also saw the halo setting rise in popularity, a setting which features a central stone, often a diamond, surrounded by a ring of smaller stones.

The box setting was also a popular choice during the Art Deco jewellery period, although it hasn’t survived in any large way into the modern era. It involved a diamond being set into a square, highlighting the geometric feel of the design – geometric shapes and clean lines being incredibly popular within jewellery of this period.

While the popularity of this setting has waned amongst modern jewellery designers, the box setting is a clear identifying feature of Art Deco-style rings, making it a great setting to look out for if you’re in the market to add Art Deco rings to a growing collection of vintage rings.

At Gatsby Jewellery, we offer a wide range of beautiful pre-loved jewellery from throughout the Georgian, Victorian, Edwardian and Art Deco periods, including mesmerising antique & vintage engagement rings.