A Guide to Edwardian Jewellery

This guide chronicles the ethereal, exquisite jewellery of the Edwardian era, from its glittering inception to its culmination at the dawn of WWI.

Known in Europe as ‘La Belle Epoque’, the Edwardian era was a period of frivolity and wealth for the upper classes, led by the luxury-loving King Edward VII. Edward earned a reputation as a light-hearted, gambling playboy, his love for life’s luxuries extending to jewellery.

Aside from his magnificent coronation (attended by royalty and aristocracy from across the globe), Edward held spectacular society balls and soirées showcasing flagrant displays of material wealth.

Founded in the turbulent political and social climate of 1847, Cartier’s desirability skyrocketed after it was awarded the Royal Warrant in 1904, becoming the official jewellery supplier to King Edward and his court. Cartier’s innovative, fashion-led ethos pioneered platinum in Edwardian jewellery, sparking the ‘white on white’ trend that lasted until the beginning of World War I in 1914.

Edwardian jewellery is typified by delicate, ethereal designs using some of the world’s most precious and durable stones, such as diamonds and platinum.

Railing against mass-made jewellery, Edwardian jewellery drew inspiration from the 18th century and shifted towards high-quality, handcrafted designs. Style-conscious Edwardians coveted the intricate detailing and traditional motifs such as ribbons, bows, garlands, and lace, all of which rapidly rose to prominence.

Platinum was prevalent in Edwardian jewellery due to its strength, beauty, and capacity to complement the era’s feminine pastels. It was also frequently used to make lighters and millegrained, diamond-encrusted lace jewellery.

The De Beers Consolidated Mines Ltd founding in 1888 made diamonds widely available and relatively affordable in the Edwardian era. Jewellery often incorporated several diamond cuts in one design during this period, coinciding with the introduction of new gemstone cuts.

However, pearls sat atop the status pyramid as they were more valuable than diamonds at the time. The luminous stones typified Edwardian jewellery’s delicate ‘white’ theme, and many pieces incorporated both diamonds and pearls.

Platinum paved the way for the millegrain decorative technique, which applies a border of delicate balls and ridges around a gemstone or on the edges of a design to create a softer, lighter look.

Sparkling diamond and pearl filigree tiaras were fashionable in the Edwardian era, undoubtedly inspired by the abundance of glamorous events at Buckingham Palace. Wearing a bandeau with a feather aigrette was another popular, albeit more low-key style.

Necklines and collars evolved following the conservative Victorian era, bestowing renewed importance on necklaces. Styles of the period included the popular colliers de chien (‘dog collars’), made from a ribbon adorned with a brooch or gemstones, or a series of pearl strings attached to form a choker.

Long necklaces were equally popular, with pearl ‘chains’ worn full length, below the waistline. For example, sautoirs – composed of long ropes of pearls or beads with a fringed tassel at either end – were wrapped in excessive proportions around the neck.

Bracelets were ethereal and light, featuring swirling motifs and flowery designs, usually worn alone. Bracelets with ornate front sections, tapering away to refined chain links across the underside of the wrist, were particularly fashionable.

Usually made from platinum and diamonds, Edwardian rings featured intricate techniques such as filigree and millegrain. This luxury construction ensured the era’s ornate pieces sparkled, so it’s little wonder they make stunning engagement rings to this day.

Given their neo-baroque styling, Edwardian rings are considered works of art best worn alone or alongside a simple wedding band. 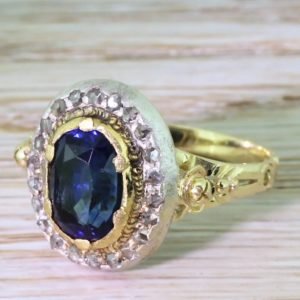 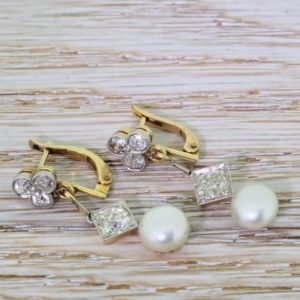 Aside from rings and earrings, the Edwardian era produced some stunning brooches and pendants, too: 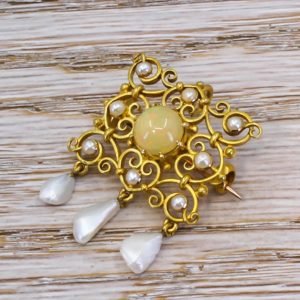 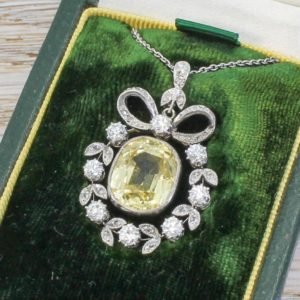 End of an era

When WWI broke out in 1914, the war effort eclipsed the era’s frivolous party scene. The vast majority of platinum was diverted to the war effort, marking the end of the hedonistic Edwardian era.

⟵ What Is Arts And Crafts Jewellery?
Back to the blog
Famous Art Deco Jewellery Pieces ⟶