A Guide to Suffragette Jewellery

The story of the Suffragette movement is a part of national history that intertwines politics, social justice, feminism, and culture. The suffragettes were an iconic force in the advancement of women’s rights, and they left behind a legacy in the form of huge cultural shifts as well as much smaller impacts on the world, like the idea of Suffragette jewellery.

Who were the suffragettes?

Suffragettes were the women who fought for the right to vote during the 19th and 20th centuries. Their aim was to have their voices heard, but despite this, the suffragettes were incredibly controversial. At the time, they were mocked and detested by the police and press, and even other women – who believed that the suffragettes posed a threat to family life.

Other people believed that if women won the right to vote, British politics would be diluted and the country would go downhill – they thought that women didn’t have the brainpower to vote in the same way that men did.

What are the suffragette colours?

The suffragette colours are purple, white, and green. Purple represents dignity, royalty and freedom, white represents purity in private and public life, and green represents hope and is the emblem of spring.

The colour scheme was decided by Mrs Pethick-Lawrence in 1908 and was seen as a duty and privilege to be worn. Wearing these colours was a good way for women to demonstrate their allegiances to the movement, and even recruit people to the cause.

The colours also correlated to the slogan – Give Women the Vote (green, white, violet). The combination of peridot, amethyst and pearl were often used in jewellery to convey this coded message.

Many pieces of jewellery have been associated with the suffragette movement, not only those that use violet, white, and green gems.

The Holloway Brooch was given to suffragettes who served sentences in Holloway prison – they are rare and very authentic and fetch a good price. Other pins were given for women who went on hunger strike whilst in prison. Souvenir jewellery became popular as well; Votes for Women bar brooches and WSPU badges, too.

If you want to honour the suffragette movement with your next piece of antique jewellery, pieces that contain amethyst, peridot, or pearls are a good choice. These gemstones represent the purple, green, and white colours that the suffragettes used as their motif.

This amethyst and pearl necklace from the 1880s is a beautiful example of high-quality suffragette coloured gems being used on a piece of jewellery. 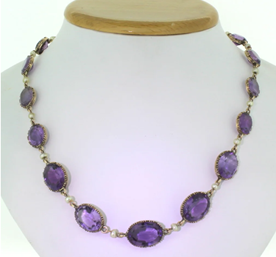 ⟵ Different Types of Necklaces
Back to the blog
Spotlight on: René Lalique ⟶