Home / Blog / The Significance of Birthstones: January and Garnet

The Significance of Birthstones: January and Garnet

Birthstones are used in many different types of jewellery and have been for decades, and they’re a great way to choose jewellery that you have a more personal connection to. Certain birthstones are gems that have been used consistently throughout history, such as the garnet, and they have historically been popular in engagement rings, necklaces, and bracelets.

Garnet is the birthstone for January. It falls between 6.5 and 7.5 on the Mohs scale of hardness meaning it’s not really suitable for everyday wear, but ideal for earrings, necklaces, brooches and rings worn for special occasions.

There’s a wide range of naturally occurring garnet colours, from the typical reddish-pink to yellow, orange, blue, purple, and black. The rarest garnet type is Tsavorite which holds a vivid green colour that rivals an emerald’s hue.

Commonly used since the Bronze Age as gemstones in jewellery and votive offerings, they have been found in archaeological sites throughout Ancient Egypt and the Ancient Roman Empire, and were often the base for intaglios. Garnets were thought to remedy inflammatory disease and to bring calmness and readiness.

Pyrope, almandine, spessartine, grossular and andradite are all different types of garnets, and these elements give the stones their rich, pinkish-red colour. They are found in different regions all over the world: red garnets in Germany, green garnets in Russia, orange, yellow and green garnets in Kenya, Tanzania, Madagascar and Namibia.

Garnet is thought to bring peace, prosperity and good health to those who wear it. To some, it’s known as the ‘gem of faith’ – as wearers who do good will have good luck from it, but those who commit wrongdoings whilst wearing it will suffer bad fortune. The gem also signifies lasting friendship.

How to clean garnet

Most garnets are untreated, which means that they can be cleaned by using a soft brush with warm, soapy water. However, if your stone has been fracture-filled or mended, you should take extra care when cleaning it. Ultrasonic cleaners are also safe for garnets but should be avoided on mended stones. Steam cleaning is not recommended.

Garnet was particularly popular in rings, jewelled headwear and pendants in the Victorian times, as the stone’s deep colour worked well against other popular materials of the time like gold and enamel – as seen in this Art Deco diamond and garnet ring, which features a central diamond flanked by four vibrant garnets. 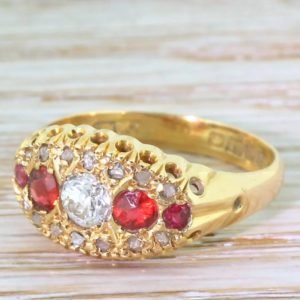 Showcasing the multiplicity of garnets, this stunning demantoid garnet ring features a green stone set in an open collet setting on a rose gold and silver band. Each of these rings is a perfect example of the versatility and beauty of garnet. 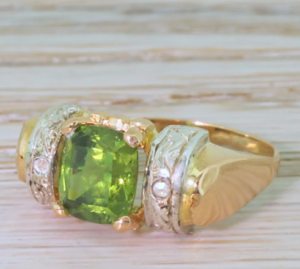 ⟵ What Is A Cocktail Ring?
Back to the blog
Spotlight On: Robert Goossens ⟶