The History Of Gold Jewellery

If there is one thing in the world that signifies luxury, it’s gold. Gold in all its forms is the world’s most ubiquitous and historic symbol of wealth. For thousands of years, it has been moulded into coins, crowns, armour – and, of course, jewellery.

Learn all about the history of gold jewellery, from its humble beginnings in pre-history to its innovative use in modern antique jewellery, here.

Where does gold come from?

In its natural form, gold is found deep in the layers of the earth. It is transported by water, molten lava, volcanic eruptions and earthquakes, to the earth’s crust where it is mined. Geologists have found gold inside rocks as old 4.5 billion years ago.

What is gold made of?

Gold is a chemical element. It has 79 protons in every atom, and every material composed this way will behave like gold. Gold can be mined or created artificially, by assembling protons in this way.

Whilst gold jewellery can be traced back to 4400 BC, it may have been crafted and worn much earlier. Ancient gold jewellery was discovered by archaeologists on a dig in modern day Bulgaria, where they found hundreds of gold jewellery pieces belonging to the Thracian era.

There were items of jewellery alongside other decorative adornments that indicated status and wealth. Not only this, but the jewellery also displayed an impressive working knowledge of goldsmithing.

The Thracians weren’t alone in mastering working with gold. By the time of the Ancient Egyptians, molten gold was already being poured into moulds in order to create objects – a casting process that we continue to perform today.

Why has gold been used for so long?

Gold, as we’ve already mentioned, is quite soft compared to other metals, which allows it to be shaped and moulded easier. Alongside this, gold is resistant to tarnishing and rusting, meaning that the warm yellow colour perceived when the jewellery was first created would last, essentially, forever.

For ancient civilisations, gold jewellery therefore represented a long-lasting permanence, something that could accompany kings and accomplished warriors into the afterlife.

Aside from this, gold was abundant in places like Egypt, therefore it was used for jewellery amongst many other things.

We explored Egyptian jewellery as a whole in another piece, which you can read here.

Gold jewellery as a cultural storyteller

From the filigree creations of the Etruscans in 6 BC Italy, to Late Bronze Age Ireland and Elizabethan England, gold jewellery has served not only as a decorative beauty but as a means of discovering what it was like to live in historical periods.

The Shannongrove Gorget (800-700 BC), for example, is a large, gold ceremonial collar found in Limerick, Ireland. The design of this collar suggests that a chain once allowed it to be worn as a necklace. As well as this, the disposal of the collar as part of a burial ritual hints at jewellery playing a huge role both in life and death.

This collection tells a story not only of gold jewellery, but of trade routes from Asia, India and South America, to the wealthiest hands in Tudor England.

Alongside portraying what life may have been like many years ago, historical gold jewellery can also reveal the invention of certain techniques used to create the lavish pieces we find.

Chasing, granulation, filigree and repoussé are just some of the earliest techniques applied to gold. They created indents, three dimensional layers, structures and relief patterns within gold jewellery.

As far back as 2500 BC, gold jewellery featuring granulation – where the surface of gold jewellery is decorated with tiny spheres of gold – were crafted, found in the tombs of Mesopotamian royalty. These techniques have influenced jewellery design throughout the ages. The craftsmanship on these panther-shaped cufflinks would not have been possible without these early innovators. 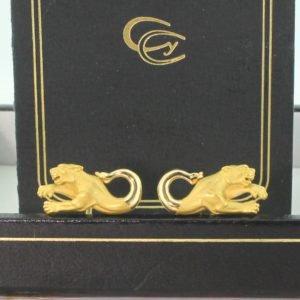 Techniques used to create gold jewellery also vary based on the location. Central Italy, for example, has a long history of engraving techniques, including bullino. This uses a small tool to produce micro lines or dots for a satin line finish.

The Florentine finish, also, is a method of creating texture in the surface of gold jewellery, with a cross hatching pattern. This style is now synonymous with Italian fine jewellery house, Buccellati.

Gold is usually classified by carat weight, ranging from 8-24k. The addition of copper, silver and other base metals is what can allow for variation in both weight and colour.

More gold means a richer yellow tone, and also a softer final product. Jewellery from India, for example, is known for having a higher concentration of gold. This results in the bright yellow look and a softer feel, and makes it 24k in most cases.

In mid-19th century Imperial Russia, the iconic jeweller Peter Carl Fabergé created what he referred to as ‘Russian gold’ by adding copper. This is more commonly known nowadays as rose gold – as seen in this rose gold wedding band. 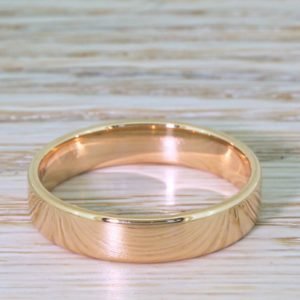 What is white gold?

In the early 20th century, white metals such as nickel, silver and palladium were added to gold to create this effect, as seen in this 18k white gold engagement ring. This was developed to circumvent the restrictions on platinum imposed during WWI, and is still a popular choice among contemporary jewellery designers. 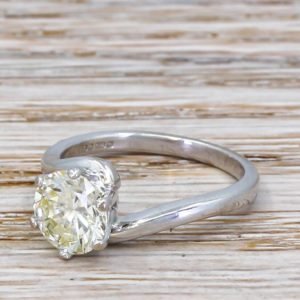 Is platinum better than gold?

Whilst both metals are strong, platinum is more durable than gold. Its high density and chemical composition make it less likely to break, so it lasts longer than gold. Despite being stronger, it is also softer than 14k gold. So, platinum is stronger, but they both make for great materials for jewellery.