The Significance of Birthstones: April & Diamond

April’s birthstone is diamond, the most popular and precious of all gems. Enduring and iconically romantic, diamonds are steeped in tradition, from symbolising status and wealth to an eternal symbol of love. Cupid himself was said to wield a diamond-tipped arrow. Given their radiance, it’s little wonder why diamonds are among the most valuable gemstones.

The history of diamonds

Derived from the Greek word ‘adamas’ (invincible; unconquerable), which is fitting due to their hardness, diamonds were initially used to engrave tools, before taking on a range of symbolic and cultural meanings.

The Ancient Greeks believed diamonds were the tears of the Gods. Romans regarded them as shards of stars. In India, diamonds were valued for their indestructibility and were believed to fend off evil.

Diamonds were also thought to protect against the plague during the Middle Ages, and Queen Elizabeth I reportedly wore one as protection. Across the channel, Napoleon, a believer in the mystic powers of diamonds, carried a sword embedded with what is widely considered the purest, most beautiful diamond in the world, The Regent Diamond.

What do diamonds symbolise?

Being April’s birthstone aside, diamonds have always taken on other meanings. They are associated with 60th wedding anniversaries as a symbol of longevity. They also appear frequently in popular culture, with Shirley Bassey iconically singing that diamonds are forever. Below, we’ve collated a list below of each diamond hue and what they’re said to symbolise.

Red diamonds are extremely rare, with only 30 known to exist on earth. They are said to symbolise passion, strength, confidence and power.

Orange diamonds receive their deep, vibrant hue due to the presence of boron in the formation process. They are widely considered to symbolise energy, enthusiasm and courage.

Yellow diamonds are extremely popular and have been embedded in some of the world’s most iconic pieces of jewellery. They are said to represent friendship, happiness and hope.

Blue diamonds represent truth, peace and devotion, and like their orange counterparts, receive their colour from the presence of boron.

Brown diamonds, also known as coffee or cognac, are created due to the presence of nitrogen in the formation process. They are believed to connect the wearer with the earth and nature, while also symbolising clarity and stability.

White diamonds symbolise holiness and unity, and as such, are the most sought-after shade of diamond engagement ring.

The science of diamonds 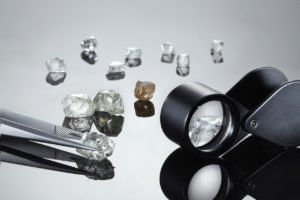 Held together by incredibly strong carbon bonds, diamonds are the hardest substance on earth. As they can only be scratched by another diamond, they’re suitable for everyday wear.

In their most natural form diamonds appear clear, but elements such as nitrogen and boron mean you can find them in a vast spectrum of colours. Their memorising sparkle is produced by a combination of reflection, refraction and dispersion.

The 4Cs offer a useful buyer’s guide for those considering buying diamond jewellery.

Carat is the unit of weight by which diamonds are measured. Each carat can be subdivided into 100 points, which enables precise measurements to the hundredth decimal place. Generally, the price of diamonds increases with the carat weight; however, two diamonds of equal carat weight can have very different values, depending on the 3 remaining Cs.

A diamond’s cut refers to how well its facets interact with light and produce their characteristic sparkle. The cut quality is crucial to a diamond’s beauty and value, but it’s also the most intricate and difficult to analyse of all the 4 Cs. The most common cut is the round brilliant cut, which is determined by mathematical analysis – in this case, ‘brilliant’ refers to the diamond’s proportion and symmetry.

Diamond clarity refers to the absence of blemishes and inclusions in the stone. Several factors must be determined to evaluate a diamond’s clarity, namely the number, size and nature of any imperfections.

Evaluating the colour of gem-quality diamonds is usually based on the absence of colour. Chemically pure diamonds have no hue – like pure water. Consequently, they have a higher value. Diamonds are graded from D to Z, D being completely colourless and Z containing a distinguishable yellow or brown tint.

Our range of vintage diamond engagement rings features diamonds of all hues, and spans many periods, from Georgian to Art Deco.