Home / Blog / The Significance of Birthstones: June and Pearl

The Significance of Birthstones: June and Pearl

Those born in June are lucky enough to have three birthstones: pearl, alexandrite and moonstone. Of these three, pearl is the most popular – and so it is pearl that we will focus on.

Most know that pearls are created by clams, but few know that only two groups of clams create iridescent pearls made of nacre. These pearls have been valued for thousands of years. Gemmologists consider pearls to be as rare and precious as diamonds.

Pearls are found all over the world, but natural pearling is now confined to the Persian Gulf. Australia is also a source for pearls, and fleets of diving boats harvest these from the Indian Ocean. Most freshwater cultured pearls are from China, but South Sea pearls are harvested along Australia’s coastline, the Philippines, and Indonesia.

The significance of pearls

Like other gemstones, pearls are deeply symbolic. They are considered demure, delicate, and pure, but are also associated with female power. Wealthy women – such as royalty, politicians, and CEOs – are often seen wearing a string of pearls.

The pearl is aligned with the zodiac sign of Gemini and has been said to bring love, luck, wisdom, and peace. The whiteness of pearls is associated with purity, making pearls popular in wedding jewellery.

How are pearls formed?

Pearls are made by marine oysters and freshwater mussels. The pearl itself is a by-product of the way that a mollusc defends itself against irritants or parasites.

When an irritant enters the shell, the oyster or mussel secretes layers of aragonite and conchiolin, creating a material called nacre – also known as mother of pearl. This slowly encases the irritant and protects the mollusc. Cultured pearls are created from a manually inserted irritant.

Nacre can form naturally around any irritant that gets inside the shell, meaning that some uniquely shaped pearls can be formed in the process.

What is a cultured pearl?

Kokichi Mikimoto invented and patented the cultured pearl in 1907. He inserted a small stone into an oyster, which then formed a nacre pearl.

Cultured pearls were thought of as a cheap imitation until they were popularised by Marilyn Monroe when she wore a cultured pearl necklace in 1954.

How hard are pearls?

Pearls range from 2.5 to 4.5 on the Mohs hardness scale. This means that they are not suitable for everyday usage as they may get scratched or damaged by irritants like sand, dust or hair.

Pearls are sensitive to extreme heat and acidity: authentic pearls will dissolve completely in vinegar!

There are many varieties of pearl, but the finest have a reflective lustre which makes them iridescent. Black pearls are very rare in nature so are mostly cultured. They appear green, purple, blue, or silver; despite their name, they’re never black.

Pearls are often found in vintage and antique jewellery pieces including rings, necklaces and earrings.

This retro pearl and diamond ring is a beautiful example of intricate mid-century jewellery, with a lustrous pearl set amongst 1.18 carats worth of old cut diamonds. 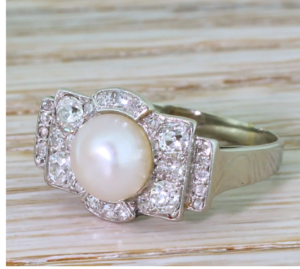 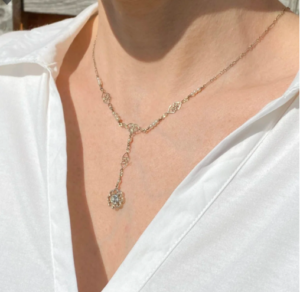 ⟵ What is Victorian Mourning Jewellery?
Back to the blog
Covid-19 Update ⟶