Edward was the light-hearted, luxury-loving antithesis of his mother, Queen Victoria, who presented herself with strict standards of personal morality. Unlike his mother, he held the throne for a relatively short time (1901-1910), but the Edwardian period’s legacy on jewellery and fashion has lasted until now.

The Edwardian period is synonymous with romance, femininity and beauty; and the delicate, airy jewellery of the time reflected these qualities. You can learn more about the Edwardian era in our dedicated guide.

Engagement rings throughout this era were often made up of complex compositions of stones, sometimes in the shape of flowers and foliage and often including as many diamonds as possible. This Edwardian rose cut diamond cluster ring is an example of a popular style, with a large orange-brown diamond in the centre surrounded by twelve high white old cut diamonds. 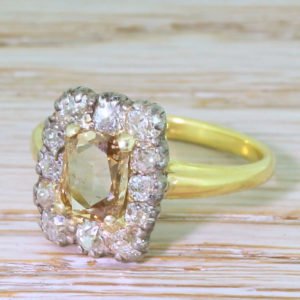 Some other telltale stylistic characteristics of Edwardian jewellery were:

Filigree is a metalworking technique that involves arranging threads and beads of precious metal into elaborate lace-like designs, often inspired by nature such as flowers, vines and foliage. This Edwardian sapphire and diamond filigree cluster ring is a great example of this delicate and intricate metalwork and the eye-catching effect it has. 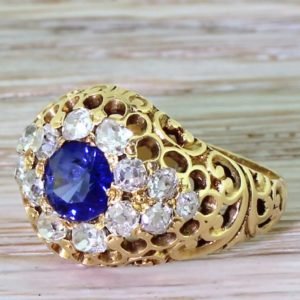 Pavé settings are made up of small gemstones or diamonds set closely together and secured by tiny beads of metal. Once the gems are set, the metal beads virtually disappear into the background resulting in what looks like a continuous surface of diamonds or gems.

Bow and garland motifs and large centre stones, often encircled by calibre cut stones or small diamonds, are another design feature frequently seen in Edwardian jewellery. They tie in (pun intended!) with the light and feminine aesthetic of the period, exemplified in delicate pieces such as this Edwardian sapphire and diamond pendant. 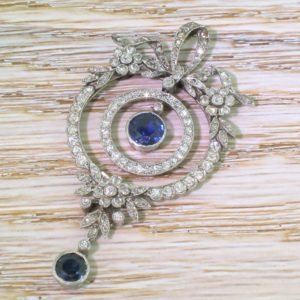 It also became fashionable to “stack” rings, with multiple rings on one finger to create a layered combination of metals and gemstones. Around 1910, the fashion turned to black and white, and designers made use of diamonds, platinum, onyx and black enamel to create vaguely monochromatic jewellery.

Influence of the Ballet Russes

The Ballet Russes were a ballet company based in Paris that were around between 1909 and 1929. Historians believe that they had an enormous impact on the world of fashion, dance, and design, even having an influence on the defining traits of Edwardian jewellery. 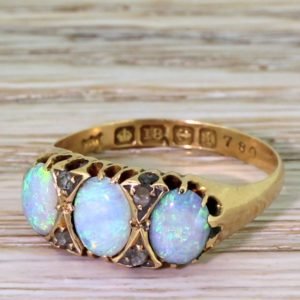 ⟵ How To Start An Antique Jewellery Collection
Back to the blog
Kutchinsky Jewellery: A Celebration of Imagination and Workmanship ⟶