A Guide to Emerald Jewellery

They have been adored and valued for thousands of years and, throughout history, have featured in some of the most important necklaces, rings, earrings, brooches, bracelets, and purses. Their distinctive colour evokes warmth and personality, making antique emerald jewellery ideal for any occasion – especially for those born in May.

Because we have been adorning ourselves with emerald jewellery for so long, symbolic value has gradually become attached. For some, emeralds symbolise rebirth. For others, it’s linked to nature and vitality. Emeralds are part of the beryl family and, alongside diamonds, sapphires and rubies, they are considered a precious gem. On the Mohs scale, a universal scale that measures the hardness of a stone, they sit between 7.5 and 8 out of 10.

The finest emeralds have a pure verdant green hue and a high degree of transparency. Most emeralds have natural inclusions, but if the naked eye can’t see these, the gem is considered flawless.

Emeralds often feature a secondary colour, most commonly blueish green or yellowish-green. If a gemologist deems an emerald isn’t intensely green enough, it ceases to be an emerald and is instead classed as green beryl.

Where are emeralds found?

Emeralds are found all over the world, but it is Columbia where the best examples are mined. Columbia produces around 95% of the world’s emeralds, and production has increased drastically over the last two decades. Other principal emerald deposits are in Brazil, Zambia, the USA, and Pakistan.

Only in Colombia are the rare trapiche emeralds found. These gems have dark impurities that form a hexagonal core in the stone, with lines sometimes running from the centre of the stone to the outer edges, making them look like spokes or wheels. This is where the gem gets its name – a trapiche is a wheel used in Columbia to grind sugarcane. 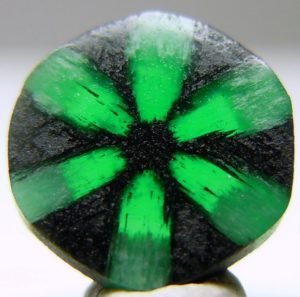 The first recorded ownership of an emerald was in Egypt circa 330BC. It was said to have been Cleopatra’s favourite gemstone, although some historians think her emeralds might actually have been peridots.

It is believed that the Roman emperor, Nero, who was supposedly short-sighted, used flat emerald eyeglass to watch gladiator contests as the stone was at the time thought to aid eyesight.

Some of the most famous emeralds, such as the Mogul Mughal stone and the Devonshire Emerald, were discovered by Spanish conquistadors in South America in the 16th century. Today, the Mogul Mughal can be seen in the Museum of Islamic Art in Doha, Qatar.

Emeralds in the Victorian Era

Emeralds’ popularity soared in England during the Victorian era thanks to royal endorsement. On the announcement of their engagement in 1839, Prince Albert presented Queen Victoria with an 18-carat gold serpent engagement ring with rubies for eyes, diamonds for a mouth, and a large emerald in the centre of its head. During this period, snakes were a popular motif in jewellery and symbolic of eternal love.

Before this, engagement rings were rare. But after this public display, it became fashionable for women of wealth and standing to be given an engagement ring by their husbands-to-be. Queen Victoria was buried with the ring when she died in 1903.

Learn more about gemstones with our A-Z of Gemstones blog, where you’ll discover the fascinating histories, compositions, and idiosyncrasies of each gemstone.