The Magic of Opal Gemstones

What do soap bubbles, oils spills on wet roads, butterfly wings, and seashells have in common with the opal gemstone?

Iridescence is a natural phenomenon that evokes feelings of magic and mystery. The surfaces of iridescent objects appear to be changing colour gradually as the surface is viewed from slightly different angles. This change of colour is caused by microstructures in the material that interfere with light. In fact, in Greek, opal means ‘to see a change of colour’. Their iridescence has been noted throughout history, with most civilisations seeing opal as a lucky gemstone, and in 75 AD, the Roman Scholar Pliny wrote:

“Some opali carry such a play within them that they equal the deepest and richest colours of painters. Others…simulate the flaming fire of burning sulphur and even the bright blaze of burning oil.”

He wondered at the fact that this kaleidoscopic gem encompassed the red of ruby, the green of emerald, the yellow of topaz, the blue of sapphire, and the purple of amethyst. 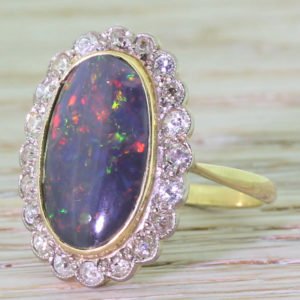 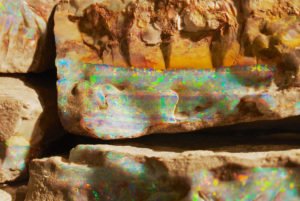 In the west, these precious stones are commonly set in opal jewellery. Opal rings, earrings and necklaces are especially popular and are treasured tokens of hope and good fortune.

Opal can come in a variety of types and colours, with black opal considered to be the rarest while white, grey, and green are deemed the most common. White opals can look serene, graceful, and pure set in a yellow gold ring and paired with diamonds, as in this opal and diamond cluster ring.

Black opals, however, are best suited to white gold or platinum where they can stand out and create a sharp, dramatic contrast. This mid-century black opal solitaire ring demonstrates the wondrous iridescence that black opal can feature, and is complemented by a unique sweeping white gold shank.