Home / Blog / What Is A Star Sapphire?

What Is A Star Sapphire?

A star sapphire is a variety of sapphire which exhibits a unique reflection, giving the impression of a star trapped within the stone. They have long been a highly coveted and prizes stone, used both for aesthetic purposes and as a talisman across centuries.

What makes the star in a star sapphire?

The optical phenomenon within a star sapphire is known as asterism.

Asterism – from the Latin ‘astrum’, meaning star – is caused by small needle-like inclusions of the mineral rutile. However, in black star sapphires, both their colour and stars are caused by the shiny mineral hematite.

This causes the light to reflect in a rather unique way, causing a star to form on the stone. This Art Deco star sapphire ring has a clear star in the bottom centre of the grey-blue stone. 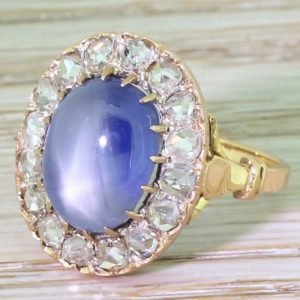 A star sapphire needs to have the right amount of rutile to allow it to be cut and polished, and they are often cut into cabochons with high domes to maximise the star effect. They generally have uneven tops or bottoms, which is often necessary to allow the star to be properly orientated and to display the best asterism. However, you should be wary of stars that are too perfect – many man-made star sapphires exist on the market, and this is a tell-tale sign that the star is painted on.

Most star sapphires remain untreated, but they can be subjected to treatments to improve their colour or artificially induce asterism. They can be heated to intensify their colour, but this must be done at modest temperatures and with extreme care to avoid ruining the rutile silk.

The best stones are translucent to semi-transparent.

Colour saturation in star sapphires decreases as opacity increases. So, whilst opaque star sapphires may have bright, well-defined stars, their colour can be dull and unattractive.

However, like transparent sapphires, they come in a wide array of different colours and hues. They range from tones of blue to pink, purple and even grey and black.

The most desirable colour – again, like with transparent sapphires – is a vivid, intense blue. These sapphires get their colouring from the minerals iron and titanium, whilst a more purple tone is encouraged by the inclusion of vanadium. This Victorian star sapphire ring displays a very clear star and is pinkish-purple in tone. 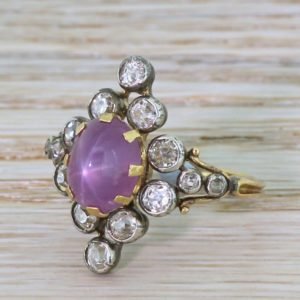 A small amount of iron results in a more yellow or green tone, while chromium produces the red tones. Iron and vanadium together result in golden to orange tones. The Thai Star Sapphire, for example, is famed for its beautiful golden star.

The largest star sapphire ever discovered is a huge 9719.50 carats and is named The Lone Star. It is a lavender blue, and the stone was cut in London in November 1989. The stone is owned by a jeweller called Harold Roper; however, little else is known about the stone or its whereabouts, so it may no longer be in existence.

The Star of Adam is the largest pure blue star sapphire in the world. It was discovered in 2015 and weighs 140.49 carats. This sapphire is estimated to be worth around £300 million.

However, the most interesting star sapphire is the Black Star of Queensland, which has a truly unique backstory. The sapphire was discovered by 12-year-old Roy Spencer, in the middle of the gem fields of Queensland during the 1930s. He returned the gem to his father, Harry Spencer, who was a jeweller from the area.

Not knowing that sapphires could come in any other colour but blue, Harry dismissed the whopping 733 carat gem as nothing more than a large black crystal. It was used as a doorstop in the family home for many years until he became aware it was a sapphire. He then assessed and realised the value of the large black star sapphire. The centre of this star is considerably larger and brighter than average star sapphires.

What do star sapphires mean?

Star sapphires have often been used as talismans, reputed to have mystical powers.

The celebrated explorer Sir Richard Francis Burton travelled Asia with a large star sapphire, which he found brought him much luck.

In the past, some Christians referred to star sapphires as the stone of destiny. They associated the three crossbars of the star with faith, hope and destiny. As well as traveller’s guides, star sapphires were used for protection from illnesses and ill omens.

Supposedly, the gems warded off the evil eye and scared away devils. They were believed to be so powerful that the wearer would be protected even after they passed the sapphire on.

Rubies are made from the same mineral as sapphires, called corundum, and thus they share many similar properties (such as hardness and composition). So, like sapphires, rubies can also contain asterism and they become star rubies.

Star rubies are incredibly rare, and because of this are extremely desirable and sought after. Again, like sapphires, they are usually cut into cabochons to display the star as effectively as possible. They vary from semi-transparent to opaque and come in multiple shades of red and pink.

⟵ The History of Art Nouveau Jewellery
Back to the blog
What Is Arts And Crafts Jewellery? ⟶