Art deco jewellery was a physical manifestation of its time; freedom-seeking and unafraid, during which American women gained the right to vote and fewer constraints on women in general meant style was changing. Designers expressed themselves using new and different types of fashions, including what had traditionally been considered masculine styles. Designs of the time were unified by clean-cut, circular and linear ethos. The 1920s saw black and white designs. The 1930s were influenced by Asian, African, and Middle Eastern styles that brought stylised florals, and bright colours in the form of rubies, sapphires, onyx, jade, lapis and frosted quartz to the toolbox of the Art Deco movement.

Raymond Templier was born into a family of jewellers. His grandfather, Charles, founded the firm Templier in Paris, 1849, and he followed in the footsteps of his grandfather and father, Paul Templier’s designs were bold, modern and heavily influenced by cubism, an avant-garde art movement that revolutionised European painting and sculpture. Templier wanted to translate cubist ideas into jewellery. As a designer, he was fascinated by the juxtaposition of opposing arcs and semi-circles, and various inverted triangles. He didn’t use precious metals and stones for the sake of it. His concern was with their effects, so he used gold, silver, enamel and lacquer interchangeably. He also used diamonds for their sparkle and lack of colour, to bring light to a piece of jewellery.

While it was Louis-Francois Cartier who founded Cartier in Paris in 1847, it was his grandson Louis Cartier who was responsible for some of the company’s most memorable Art Deco designs. The decorative art movement developed alongside the emerging industrial economy in France and became part of a rapidly changing culture that nodded to the advancements and processes of technology. For Louis Cartier, Art Deco aesthetics represented both machinery and modernism and many Cartier designs showcased linear, modern and paired down symmetrical forms. This Sapphire tank ring has long been one of Cartier’s most recognisable signature pieces – a heavy-weight ultra-modern band with sleek lines. 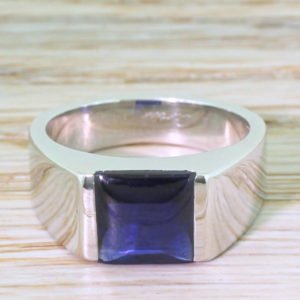 Daughter of Alfred Van Cleef, Renee Puissant, took control of the company’s artistic direction in 1926 and together with Rene Sim Lacaza took the company and its designs in a whole new direction, positioning Van Cleef & Arpels at the forefront of jewellery design. Van Cleef and Arpels were known for specialising in platinum wrist and pocket watches set with diamond and crystal, while Puissant used unconventional materials like mother of pearl, snakewood and lacquer.

One of the most enduring techniques developed by Van Cleef and Arpels is the Mystery Setting, which consists of hundreds of small gems which seems to float on top of the structure with no visible mounting. This was done by using a fine gold mesh which hugged the contours of the stones resulting in a seamless surface of gems.

Jean Fouquet was influenced heavily by his father, George Fouquet, who was instrumental in shaping the Art Deco jewellery aesthetic. George Fouquet considered Jean’s designs to be more like works of art and that the combinations in which he was using semiprecious stones such as aquamarine, amethyst, topaz, and tourmaline would prolong their value and worth. At the time, semi-precious gems were readily available and not as valuable as they are today.

For writer Marion Fasel statement jewels have consistently gone hand in hand with women’s movements. She considers Jean Fouquet’s bold designs as representative of a time in which women were enjoying newfound political freedoms.

Jeanne Bovin and husband Rene Boivin established a reputation for creative designs that captured the essence of beauty in motion. Together they created designs marked by signature elements such as elegant lines, twists and trembling components. They rejected Art Nouveau styles and instead created chunky pieces inspired by Egyptian, Syrian and Persian designs. In retrospect, these were ahead of their time and at the time, rejected as ‘barbaric’.

Many of the pieces which never sold were dismantled to use as elements in other designs. Jeanne Bovin took over production at the House of Rene Bovin after the passing of her husband in 1917 – she kept the name of the House, which served as a kind of protection, allowing her to occupy a privileged position in the jewellery trade. Boivin and the designers she employed favoured abstract designs using closely set gems and helped pioneer the use of rock crystal, wood and chalcedony in jewellery.

Suzanne Belperron took inspiration from wherever she pleased. Congolese tribal jewellery, brutalist architecture and Japanese sakura (cherry blossom) were all translated into provocative designs. Together with Bernard Herz, the Parisian stone dealer, they created some of the most avant-garde jewellery of the 20th century.

Herz, who was detained by Nazis in German-occupied Paris, died in Auschwitz. Before his arrest, he signed over his company to Belperron for safekeeping. After the war she transferred the company back to Herz’ son and as a token of his gratitude made Belperron a partner. Belperron never signed
her jewellery and after her retirement disappeared into obscurity.

⟵ What is the difference between Vintage, Antique and Estate Jewellery?
Back to the blog
How To Start An Antique Jewellery Collection ⟶