Home / Blog / The Significance of Birthstones: March and Aquamarine

The Significance of Birthstones: March and Aquamarine

Aquamarine is a hugely distinctive gemstone, with a notable vivid blue colour that’s reminiscent of the sea and lots of associated meanings throughout history.

It’s a much loved and highly sought-after precious gem, not only for its beauty but also for the meaning people through various periods in history have attached to it. Today, it’s the birthstone for those lucky enough to be born in March.

Romans and Greeks called aquamarine the sailor’s gem and carried it with them as a talisman on seafaring journeys to protect them from rough seas, storms, shipwrecks, and even seasickness. In Roman legend, aquamarine was also said to absorb the atmosphere of young love and was considered an appropriate gift for a bride the morning after a wedding.

In Latin, aquamarine was named ‘water of the sea’ and was once believed to be the treasure of the mermaids. As a very last resort, sailors caught in a storm were believed to have thrown their aquamarines overboard to try and calm the gods.

Aquamarine was also thought to be the source of power for soothsayers in the Middle Ages, who called it the ‘magic mirror’. It was used to answer questions about the future and tell fortunes.

More recently, people have used aquamarine in spiritual meditation exercises to enhance the clarity of mind and to banish fear and phobias.

In the present day, however, aquamarine is perhaps best known as the March birthstone which symbolises youth, health and hope.

While our more rational and scientific generation may not be as convinced about the arcane powers of gemstones as our ancestors through history, there’s no doubt that the beauty and serenity of aquamarine are truly enchanting. 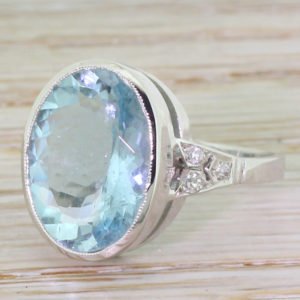 The aquamarine stone is part of the Beryl family of gemstones, a family that also includes emerald, morganite and heliodor. This stone gets its mystical blue colouring from the presence of the mineral iron and can be found in pale or deep blue colours.

The deep blue version of the aquamarine stone is called maxixe. This is primarily found in Madagascar. Whilst the more common pale type can be found in the USA, South America, and Africa.

Aquamarine is a fairly hard stone that scores a 7.5 on the Mohs scale of hardness. To put this into perspective, the diamond, which is the hardest substance known to man, scores a 10.

In terms of quality – most aquamarine stones are free of inclusions and have outstanding clarity and transparency. 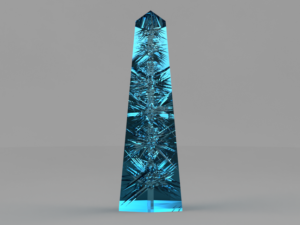 Aquamarine jewellery has a history stretching back to 500BC. Aquamarine rings and pendants have traditionally been used as gifts between couples who are still together on their 19th anniversary because the stone is believed to prolong and soothe relationships.

If you’ve ever seen or purchased a piece of aquamarine jewellery in real life, you’ll know what we mean when we describe it as reflecting both sea and heavens. Its soothing sea-blue colour complements all manner of precious metals, as well as pairing beautifully with other precious stones like diamonds.

If you’re looking for a piece of aquamarine jewellery, either for yourself or as a gift, try this stunning 19.80-carat aquamarine & diamond dress ring. 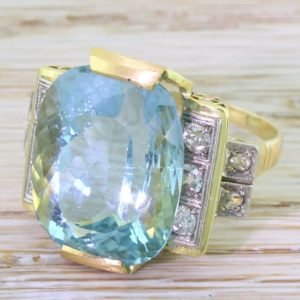 The cushion-cut aquamarine is cool, glacial blue and is securing in a wonderfully flamboyant mount. Six (three either side) old cut diamonds are set on either side of the centre stone, with four (two each side) rose cuts are set in the next step down. The gallery’s glorious sweeping detail further embellishes this impressive piece.